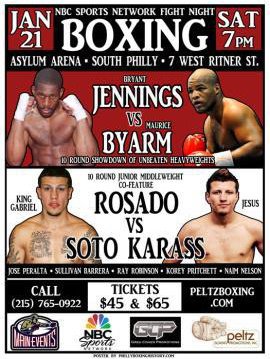 Gabriel Rosado got the new NBC Sports Fight Night series kicked off on a good note with a dominant performance and fifth round stoppage of Jesus Soto Karass at the ECW Arena in Philadelphia.

Rosado (19-5, 11 KO) just couldn't be deterred in this fight, and looked like the far better, sharper, and fresher fighter. Soto Karass (24-7-3, 16 KO) attempted to work the body and keep himself in the fight, but his punches looked weak at 154 pounds and the veteran was just slow and surprisingly overmatched in this one.

Rosado took over the fight in the second half of the opening round, and after that it was all Rosado. He was landing to the head and body, landing uppercuts with both hands, and was able to effectively pressure Soto Karass with superior handspeed and, well -- superior everything, really.

Rosado, who just turned 26, has been known as a spoiler, and while beating Soto Karass doesn't quite put him right on the world stage just yet, his talent is very real. This is someone to keep tabs on in 2012, because he's a tough, skilled fighter who has learned the hard way.

As for Soto Karass, he just wasn't there tonight. At 29, he's not old, but his ring years are beyond his actual age, he cuts pretty easily, and he doesn't have the power or physical strength to compete at 154 pounds.