Guillermo Rigondeaux KO-6 Rico Ramos: Rigondeaux (9-0, 7 KO) picks up the WBA super bantamweight title from the dreadful Ramos (20-1, 11 KO), which may save us from having to see Ramos on TV again any time soon. Ramos landed an absurd 15 punches in the six rounds of action, then tried to make a couple excuses for the loss in a post-fight interview, but he says he was hit on the back of the head, which he wasn't, and he was dizzy, which he may have been since he looked dizzy every time Rigondeaux made forward motion. To be fair to Ramos, Rigondeaux wasn't a whole lot more active, but he was far, far more effective, and clearly the better man. After the fight, Rigondeaux called out Nonito Donaire. [ Recap ]

Joel Diaz Jr TKO-7 Guy Robb: 19-year-old Diaz and 22-year-old Robb were late adds to the show when Brandon Gonzales pulled out due to injury, and they made their chance at exposure count, waging a toe-to-toe war eventually won by Diaz (7-0, 6 KO). Diaz is a cocky kid, but a legitimate talent, and both he and Robb (7-1, 3 KO) got a fight that may well have improved them both. [ Recap ]

Matt Villanueva TKO-7 Michael Ruiz Jr: 25-year-old Villanueva (7-0-1, 7 KO) showed power, speed, and the ability to land in combination, and dominated this super flyweight clash with Ruiz (8-2-1, 3 KO), who showed a ton of heart but just was not strong enough to deal with Villanueva. [ Recap ]

Javier Molina UD-6 Alberto Herrera: Molina (10-1, 4 KO) got back on the winning track, but reportedly still was not particularly impressive. For a U.S. Nationals champ, Molina, 22, doesn't appear to have much pro upside. Goossen Tutor is giving him plenty of shots, but it just doesn't appear to be there.

Daniel Ponce De Leon TKO-6 Omar Estrella: Ponce De Leon didn't have an easy time with this tune-up fight, as the veteran contender was floored in the second round, and after discovering he was in a fight, turned in a typical Ponce De Leon performance, swinging wildly and letting luck and whatever else sort it all out in the end. He was just too much for Estrella (15-4-2, 10 KO), but this showed that the 24-year-old from Tijuana can fight a little bit, and may be worth keeping an eye on. Ponce De Leon is now 42-4 (35 KO). [ The RING ]

Leo Santa Cruz RTD-4 Alejandro Hernandez: Young Leo Santa Cruz (19-0-1, 11 KO) continues his assault on the bantamweight divisions (and surrounding catchweights) by forcing Hernandez (24-9-2, 13 KO) to quit after four rounds. Of all the prospects in boxing, Santa Cruz has emerged as perhaps my personal favorite. 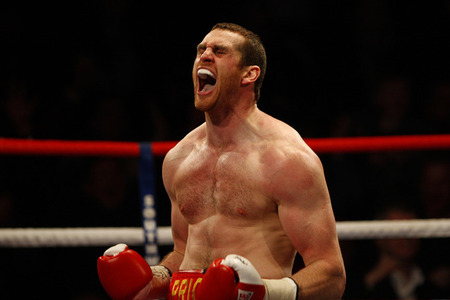 David Price KO-1 John McDermott: Speaking of assaults on divisions, 28-year-old Price is emerging as a major threat. Even though the likes of McDermott, Raphael Butler, and Tom Dallas aren't exactly world class, the obvious fact is he's got serious power in his right hand. He's also a schooled, smart fighter, and could be hell if he does get his fight with British champion Tyson Fury. For all the talk of David Price being chinny, and there is amateur evidence to back up the claim, let's not forget that the current world heavyweight champion was also long considered the same. [ Recap ]

Kevin Satchell PTS-6 Martin Power: Power, 31, is just about done in the ring, and was battered around the ring in this one by novice Satchell (7-0, 0 KO), who floored Power (22-7, 10 KO) and beat him up with right hands that just couldn't miss.

DeMarcus Corley UD-10 Gabriel Bracero: Corley (38-19-1, 22 KO) just refuses to go away, and we're all the better for it because he's still, as you can quite clearly see with this result, a valuable tester. At 37, "Chop Chop" put the first loss on the record of Brooklyn Puerto Rican Bracero (18-1, 3 KO) on scores of 94-92, 94-92, 96-90. Corley bloodied and floored Bracero in the second round, and put him down again in the third. Corley was counted down when his glove touched the canvas in the eighth. Bracero, who is 30 years old, said, "I’ve been watching Corley since I was a kid, so to fight him is a dream come true," which seems unlikely given that Corley's first major fight was in 2001, when Bracero was first going pro. [ The RING ]

Seanie Monaghan UD-8 Billy Bailey: DiBella is wild for this Monaghan kid, a New York Irishman. DiBella appears lately to be wild for anyone that can reasonably put an Irish flag on his trunks. If you haven't seen Monaghan in action, he fought on the Cotto vs Margarito undercard in December, and we've got the video of that win. Monaghan is now 12-0 (8 KO).

Ran Nakash UD-8 Derek Bryant: Nakash is new to the DiBella Entertainment group, and this was also his first fight since April 2011, when he gave Marco Huck a battle in Germany. At 33, the Israeli may be a little late on making any real waves in the cruiserweight division, but he's tougher than all hell.

Read the full recap of Rosado vs Soto Karass and Jennings vs Byarm, and the post-show analysis of the NBC Sports Fight Night premiere.

Emiliano Marsili TKO-7 Derry Mathews: Mathews (29-6-1, 15 KO) had home field advantage here, but Italy's Marsili was just too much for him. Mathews was stopped on a cut and took a pretty good beating here, going down on a body shot in the sixth round. Marsili is now 24-0-1 (10 KO).