Robbery or Close Fight? - The Failings of the 10 Point Must System in Boxing

Share All sharing options for: Robbery or Close Fight? - The Failings of the 10 Point Must System in Boxing

Ryan Bivins returns to Bad Left Hook this afternoon with a look at the current, often controversial scoring system in boxing.

Once upon a time in a galaxy not so far away boxing wasn't scored on points, but rather rounds. In the last ~100 years has scoring really gotten any better? Yes and no. On one hand now knocking a fighter down is worth more. But if a round is even aside from a flash knockdown, does that really suggest 10-8 more than if someone out classed his opponent from beginning to end with no knockdown? Furthermore it's not as if knockdowns used to be totally irrelevant. They determined if a person won the round, and if the total amount of rounds won by each fighter were even the person with the most knockdowns got the nod. And speaking of even rounds, judges had no problem calling them even. Seeing a judge score 3 rounds even in a 12 round fight today is like seeing a judge score a 10-6 round; it's not likely to happen. At one point it was not uncommon to see half the rounds of a fight scored even. And why shouldn't they be if they were razor thin? Today you see people giving fighters close rounds simply because they gave other close rounds to the other fighter. Basically they lie just to make it "more fair".

Recall Glenn Trowbridge scoring Pacquiao-Marquez III for Pacquiao by 4 points yet giving Marquez the last round. It's not to say there was no case for Marquez winning the 12th, but out of all the close rounds to score for Marquez he picked one that even people who thought Marquez was robbed blind had Pacquiao edging. And he probably did it because he didn't want his final scorecard to read 9-3 Pacquiao in a fight he knew was close. If you have to lie to make something fair, that suggests the system is unfair. No way should a dominant round and a razor thin round amount to the same thing. And back when judges felt comfortable calling even rounds, they often didn't.

Now don't get me wrong, the round system isn't the best either. In a 12 round bout a fighter that scored a knockdown in each of the 5 rounds he dominated should not be able to lose to a guy that merely out boxed him for 7 of the rounds. It's why important championship fights in the early 20th century were still often fights to the finish (or simply so long it would be highly unlikely both fighters made it to the finish line). But with championship fights being limited to 15 rounds by the 1910s/1920s, boxing looked to improved scoring.

But a 5 or 10 point system didn't show up in a heavyweight championship fight until the vacant title meeting between Floyd Patterson and Archie Moore in 1956. However, The United States, much less the world, did not embrace this new concept unanimously and switched between round and point systems into the 1970s. The last heavyweight championship bout fought on the round system was the rematch between Muhammad Ali and Leon Spinks (despite the first fight being on the 10 point system). Both bouts occurred in 1978. So when you think about it, the current scoring system in boxing isn't exactly the longest running. If it were to change again, don't be surprised.

The 10 point must system, assuming no knockdowns or multi-point rounds take place, makes the following hard to swallow scenarios a reality:

If all you're seeing is 12 point margin = "robbery" and 2 point margin = "close fight, can't argue", you're ignoring what actually transpired in the ring and reducing an art form to numbers next to names. Whether you like them or not swing rounds are common place in boxing, and sometimes they make up the entire fight. And due to the 10 point must system and judges' reluctance to call even rounds, an honest person may just score every swing round to one fighter. By honest person I mean someone who doesn't split scoring close rounds just to be "fair". For those of us who comply with the rules we are given, we must acknowledge that a shutout can actually be a pretty even fight. And just to show this actually does happen, recall 2011's Edwin Rodriguez vs Will Rosinsky. 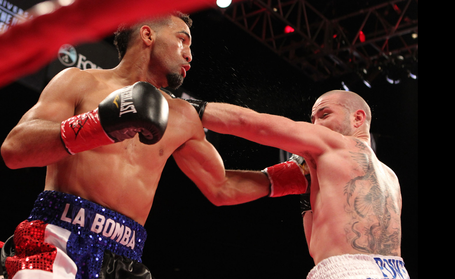 Despite the even nature of Rodriguez vs Rosinsky, all three judges scored every round to Rodriguez. No one called it robbery of the year even though many felt Rosinky won or at least deserved a draw. What did many people actually consider 2011 robbery of the year? Paul Williams MD12 Erislandy Lara. Granted Lara was robbed, he did in fact take multiple rounds off and just let Williams out work him.

And despite the myth that suggested Willie Pep once won a round without throwing a punch, you do have to throw punches to win rounds. The official result was a robbery, but it's not one of the worst robberies I've ever seen. Even though Lara was clearly robbed of a victory more than Rosinky, it's more appropriate to claim Rodriguez shut Rosinsky out than to claim Lara shut out Williams, regardless if the final result (not the score) seems more fair. And if you concede that you must also concede that fair scorecards, ones you actually agree with, don't necessarily reflect the true margin of victory. The fact of the matter is if one man dominated 7 rounds with no KDs, narrowly lost 5, and ended up losing a decision, he still got robbed blind. Conversely, if one man dominated 5 rounds with no KDs and only debatably won the other 7, he may not necessarily be able to justify a robbery.

It's just the uncommon sense of modern boxing.