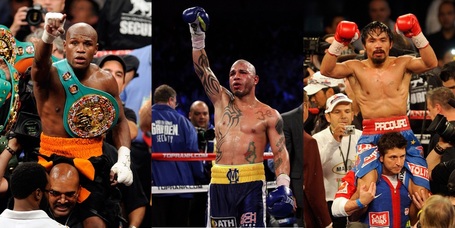 Last night, word from Miguel Cotto was that he wouldn't go down to 147 pounds to rematch Manny Pacquiao on June 9, and challenged Pacquiao to fight him at a 150-pound catchweight, which is where Pacquiao fought Antonio Margarito in November 2010.

Cotto indicated that Floyd Mayweather Jr, another potential opponent with whom he has been negotiating, would be willing to fight at 150 pounds. Now, Cotto says that Mayweather will fight all the way at the true junior middleweight limit of 154 pounds:

"I will not fight below 150 pounds. Mayweather Jr. said he has no problem going up to 154 to fight me. Pacquiao is the one who objected and wants me to once again come down to a weight between 145 and 147 pounds. If Pacquiao had no trouble going up to 150 to fight Margarito, why is there a set requirement for me to go down again? Does he fear me?"

Others in the comments of last night's post noted one thing that is true: Manny Pacquiao said after he fought Antonio Margarito that he'd never fight over 147 pounds again. Even though that fight was one-sided, Manny definitely felt Margarito's power in that fight, and didn't like it. Pacquiao's team also backed down on previously saying they'd fight Sergio Martinez with a 150-pound catchweight, too. They don't want to fight over 147.

Cotto (37-2, 30 KO) is, as we've said a few times, having his way in a unique position where he's not chasing the money, but the money is chasing him. More and more it seems very possible that any talks with Mayweather (42-0, 26 KO) could legitimately lead to a May 5 fight between Mayweather and Cotto, which it seems most prefer to a Pacquiao vs Cotto rematch, simply because it's something we haven't seen before.

If Cotto does not fight Pacquiao (54-3-2, 38 KO) on June 9, it seems that top junior welterweight Timothy Bradley (28-0, 12 KO) would be the "replacement" choice. That may be sooner than Top Rank would ideally like to make the Pacquiao vs Bradley fight, but they might not have much choice. They're running low on potential Pacquiao opponents, which is the No. 2 reason the Cotto rematch is being pursued in the first place (the No. 1 reason, as always, is money).