Ruslan Provodnikov and Ji Hoon won as expected on tonight's edition of ESPN Friday Night Fights, and did so in their usual fashion, as well.

In the junior welterweight main event, Provodnikov improved to 21-1 (14 KO) with a sixth round knockout of a gritty but undersized and overmatched David Torres (21-3-2, 13 KO). Torres, the local favorite in Washington, was a replacement opponent for previously-scheduled Julio Diaz, and continued his streak of non-wins with his first fight in 11 months. The 33-year-old veteran is now 1-3-2 in his last six fights.

Provodnikov, 28, floored Torres in the opening round, and appeared on his way to a first round stoppage victory. But instead of pressing further, the Russian chose to carry the fight a little bit, with ESPN analyst Teddy Atlas theorizing that Provodnikov may not have been able to spar enough after recovering from a cut in his last fight against DeMarcus Corley in early December, and was looking to essentially get some work in during this fight, which appeared quickly would have him in no danger.

In fact the fight was so lopsided that briefly, BoxRec called it a KO-3 win for Provodnikov: 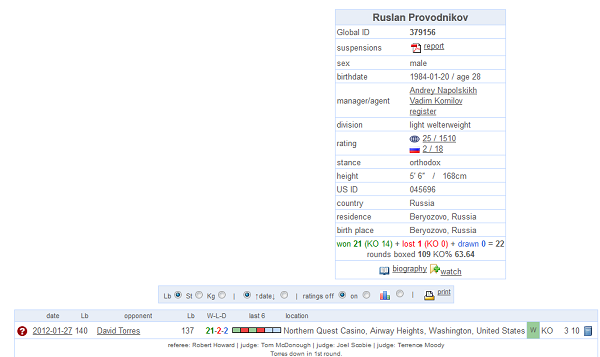 While carrying the fight deeper than it needed to go, Provodnikov wound up allowing Torres some moments in the bout, and the underdog did try to take advantage. Still, Torres couldn't do enough damage or land consistently enough to win any of the rounds, and was down a clear 5-0 going into the sixth.

In the sixth round, Torres tried to push the pace, and that's when Provodnikov grew tired of the exercise. With a big right hand, Provodnikov put Torres on the canvas for the second time. This time, after Torres rose to his feet, Provodnikov stomped on the gas and closed the show, ending the fight with a flurry that finished on a left hand, putting Torres down again and sending referee Robert Howard in to stop the bout, bypassing the count.

Provodnikov, to be perfectly honest, is probably never going to rise above this level, but he's a terrific Friday Night Fights guy. He always provides action, he's beatable, and he's got a lot of guts. If Banner can work it out, or if he leaves for a bigger promoter, Provodnikov may someday get a title shot, or even win an alphabet trinket. But he's not true world champion material -- just a good, honest, enjoyable fighter.

In the night's lightweight co-feature, Ji Hoon Kim and the Vince Vaughn-managed Yakubu Amidu went to war over 10 increasingly grueling rounds, with Kim winning by unanimous decision on scores of 97-93, 96-94, and 98-92. Bad Left Hook scored it 97-93 for Kim.

Kim (23-7, 18 KO) was, for the most part, his usual defenseless, all-offense self, but as was discussed in the live thread, he seems to improve his craft pretty consistently, and this may have been the most balanced and complete he's been to date. His pressure was there, and his right hand had some real pop, as he was able to hurt Amidu (21-3, 18 KO) repeatedly and was simply the first to land most of the fight.

Amidu, 27, had plenty of spirit and made a good fight of it tonight, but just wasn't physically strong enough to beat the 25-year-old Korean, and never had him in any trouble. Kim's body attack aided his victory, as he was able to keep more gas in the tank over the fight.

In the swing bout, cruiserweight Garret Simon improved to 6-0-1 (5 KO) with an easy, 55-second knockout win over Marcus Dickerson.

The fight was notable for two things: Joe Tessitore taking a hard stand against fighters symbolically getting to their feet at a count of 10½, and Teddy Atlas evoking Bobby Bacala by saying "Notre-damus."