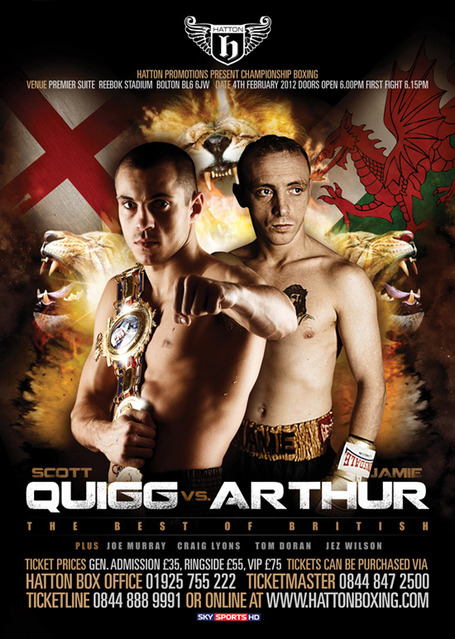 Quigg (23-0, 16 KO) is one of the best prospects in the UK right now, if not the absolute best of the lot, and at 23 he's got a lot of time ahead of him. He's been called out by Commonwealth titlist Carl Frampton, but right now his sights are set on Arthur (18-5, 4 KO), who frankly shouldn't be a great challenge for the Hatton Promotions up-and-comer.

One fighter he's looking to target after Saturday is European champ Kiko Martinez (25-3, 18 KO). Martinez is really a solid fighter, and Quigg tells Sky Sports he likes the matchup:

"Martinez is a strong come-forward fighter and with the power he possesses he's a dangerous fighter," says Quigg.

"One punch can change a fight but I'm confident his style suits my style. I've got the ability to beat him and beat him well. I've watched his fights against Rendall Munroe and Jason Booth and I believe I can do a better job than Munroe did. The confidence I've got at the minute after coming off a good win over Jason Booth, and seeing what Kiko did with Jason, I think I've got his number."

For those familiar with Quigg, how high do you rate his prospects, and how soon do you think he can hit the world stage in the competitive 122-pound division?