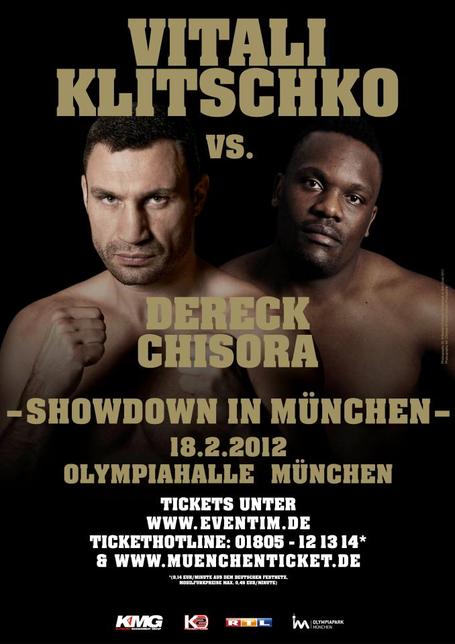 Now that's pretty classy for a modern fight poster. Nice, simple, understated. "These two men are going to fight one another," this poster tells us. No fire! No lightning! No silly slogan!

The fight will air on Epix in the United States, as well as BoxNation in the U.K., and RTL in Germany. Vitali, 40, is a heavy favorite against Chisora, but while many feel the brash Brit mostly talked his way into this fight, he's fought his way here, too.

After an ugly loss to Tyson Fury last year where Chisora showed up out of shape, he came back strong with a great performance in December against Robert Helenius, robbed on the cards in Finland. With a lack of legitimate challengers for the brothers Klitschko, Chisora's as good a bet as any to be competitive, or at the very least, make for a watchable fight where boxing fans don't strain to appreciate the craft more than enjoy themselves.