The official fight poster for the December 8 fourth fight between Manny Pacquiao and Juan Manuel Marquez.

Here's the official fight poster for the fourth fight between Manny Pacquiao and Juan Manuel Marquez, which will be held on December 8, 2012, at the MGM Grand Garden Arena in Las Vegas, on HBO pay-per-view: 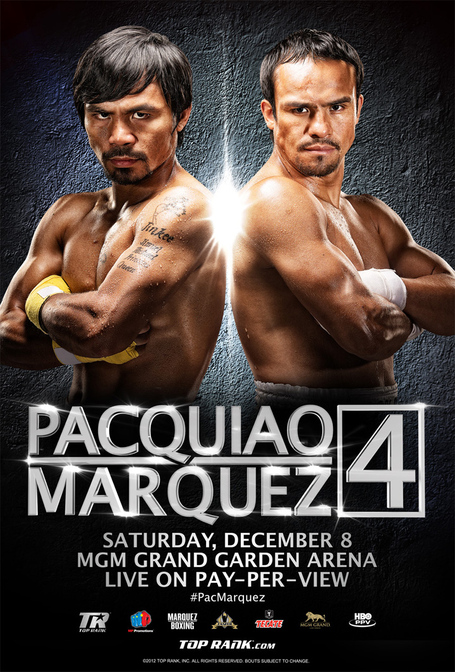 It is a fine poster -- dignified, simple, and futuristic in a classical sense. Also, a bunch of other crap I might could say about this JPEG.

I will say that usually, or so it seems, they don't make guys seem quite so muscular and action figure-ish, but I don't necessarily think that's a bad thing. And their hair looks great; very much like action heroes from video games or the like. These are important things. Make them look superhuman. After all, you're trying to sell a very human fight, between two very human men, which all of us humans have already seen three times.

LIGHTS IN YOUR FACE!