Stephen Espinoza has had success, some failures, and plenty of criticism in his first year running Showtime Sports. But is the network's boxing brand better now than it was a year ago? You bet.

Stephen Espinoza, who took over for Ken Hershman as the head of Showtime Sports, has had a busy, eventful, and change-heavy first year on the job. With money increased at the network to put into the sports programming, and a new relationship with Golden Boy Promotions, it has been a mix of success, some failures, and plenty of criticism.

Espinoza spoke with BoxingScene.com, and said that ratings overall are up about 15% this year, and noted that the Barclays Center show last Saturday did about 725,000 viewers live, and about 900,000 when the replay was factored into the number.

That's a strong rating for Showtime, especially with a show that didn't have a guy like Canelo Alvarez, who did a little over one million viewers on September 15 to set a Nielsen-tracked Showtime boxing record.

But the Golden Boy association has brought plenty of heat from within the industry, too. Rival promoters -- notably Top Rank -- say that Showtime is now "Golden Boy-owned," and things of that nature, and given that almost every show put on by the network now is a GBP production, it's not as though there isn't validity to the concerns.

Now whether or not Top Rank has really offered them much is another story. Espinoza says they've turned down two Top Rank events this year, a Nonito Donaire vs Cristian Mijares fight (and Espinoza says he would have turned down Donaire-Mathebula, which took its place on HBO, too), and Orlando Salido vs Mikey Garcia, which he turned down because Golden Boy had November 10 booked, which Top Rank knew.

Read the interview for more on what Espinoza says, but as a general review, I have to say it was a winning year for Showtime boxing. It's kind of simple: Is the Showtime boxing brand in better shape than it was one year ago? I think it's basically impossible to argue that's not the case.

While the concerns about Golden Boy's power at the network are perfectly legitimate, it's my opinion that the concerns are still mostly in the "what-if" category. We have not seen them abuse their standing with bad cards, or at the very, very least, not with cards that are substandard, worse than we are used to seeing on either network over the past half-decade or so.

The worries about GBP are what happens if they become too comfortable, and start selling bad shows that Showtime laps up because, well, they kind of have to; we've seen this happen at HBO, after all, when GBP was given a sweetheart deal there under the Ross Greenburg regime, which wound up with Golden Boy putting on a lot of lousy matchups, real and true shit shows. I'm not talking about something like the June 2 "Four Warned" show on Showtime this year; that was an OK show, quantity over great quality, on paper -- it wound up a dud, which happens.

If we do get to that point, then the criticisms will really have weight. I think it's mostly still theoretical stuff.

Strong points for Espinoza and Showtime boxing in 2012 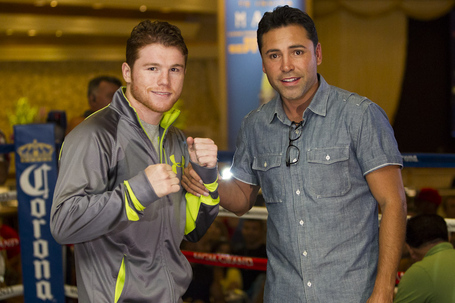 Right now, I think it's a win. Golden Boy is still working with HBO sometimes, but before Espinoza took over, you almost never saw Golden Boy shows on Showtime. Hell, it was kind of rare to see Golden Boy or Top Rank shows on Showtime. Promoters like Gary Shaw dug into the ground at the No. 2 network for a long time -- this was once "Shawtime," after all -- and guys like Dan Goossen could get fighters like Andre Ward some recognition there.

But those guys almost always would leave for the bigger network when they could. Shaw took Tim Bradley and Chad Dawson to HBO. Ward is now at HBO, which would have happened no matter what, in due time. Promoters who don't have a strong stable to fall back on want to maximize what they can get out of their one to three star fighters. That often meant "starting" them at Showtime, and once they had enough notoriety, or a big enough fight could be made, off they went to HBO, so that the promoter could get more money out of their fight dates. It's not a bad thing at all, or sleazy, or anything like that. It's very honest, simple business. Make the most money. There would always come a time when HBO had and would offer the most money to a Bradley, Dawson, or now a Ward.

With Golden Boy entrenched at Showtime, and starting to build a reputation there, we're seeing the audience increase at the network, and GBP doesn't have any pressing need to take all their guys back over to HBO as soon as they can. Not only do they not "need" the money as badly, but they have basically an entire project working at Showtime. They're raising Showtime's status, and Showtime is helping out some of these fighters, too. It's win-win for now. I don't know what the future holds with all of that, but it has worked this year. 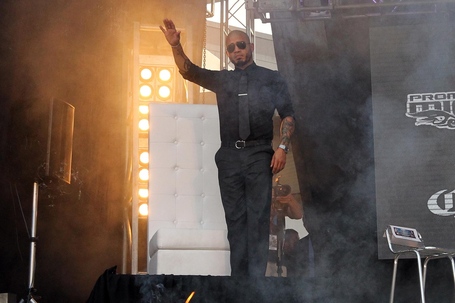 Canelo Alvarez was a big gain for Showtime, and the ratings backed that up. Miguel Cotto, working through GBP, comes back to Showtime on December 1, and that's a big get for them, too. Amir Khan is coming to Showtime on December 15; it's a tune-up fight, but Amir Khan is a name. Victor Ortiz is at Showtime now, and no matter that he lost his last fight on the network, he's an exciting fighter that people like to watch. (Obviously he can't go losing all the time, but I think there's big interest in his return next year, whenever it happens.)

Showtime didn't have the resources or the connections for this sort of thing before. The Super Six World Boxing Classic was neat, but you probably know my thoughts on that whole thing as far as it being "big." It wasn't, really. Andre Ward is a bigger star after one HBO fight than he was from the entirety of the Super Six. None of his Showtime fights in the tournament came close to the number he did against Dawson on September 8.

Hershman's job at Showtime was to maximize a smaller budget, think outside the box, and do interesting things. So he did the Super Six. He did the bantamweight tournament. He would often feature fighters that HBO didn't have interest in -- the Vazquez-Marquez series was on Showtime, after all.

Espinoza has had star power to work with, thanks to Golden Boy. I'm not saying that's something he did, but it's something he was capable of making happen through his connections at GBP. And it's very valuable. 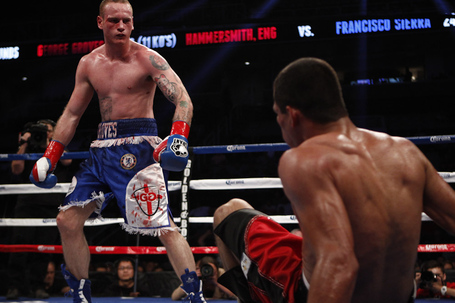 The triple- and quadruple-headers that Showtime has featured, along with the Showtime Extreme undercard bouts, have been excellent for diehard boxing fans. Basically, it's just something to keep a committed audience committed. It's not that fight one on a four-fight card, or the SHO Extreme fights, are bringing in a ton of viewers. But they're telling a diehard fan that their subscription is going to give them bang for their buck, and they're giving more fighters exposure. Slowly but surely, I think this will make a serious impact.

The UFC has done well for a long time giving their most dedicated fans all the content they can handle in new ways, with televised undercard bouts before their PPV events go live, and fights that stream on Facebook. It gets people more and more interested. And any fan that isn't a diehard fan can be made into one. You hook them, you keep them watching, and you just keep feeding them fights.

Fight fans want to see the fights. They have been conditioned for years that two or even sometimes one-fight shows are standard. That shouldn't be the standard, and it's nice to see a change happening. Not every show will be great, and four fights is a long show, and six is even longer, but that's not a real concern. If something is great, or even just good, then those fans probably come back. 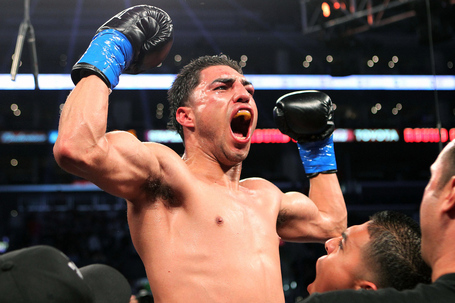 It just feels like Showtime boxing is bigger, better, and stronger than it was when Hershman left and Espinoza replaced him. Hershman did great things at Showtime. When HBO needed a new head man for HBO Sports, particularly the boxing division, Ken Hershman was an absolute no-brainer. He had done as much and often more with less resources at Showtime than Greenburg had done at HBO. I'm not saying that Greenburg was the devil, or the destroyer of boxing, or anything like that -- he did a job, and eventually, I would say it got away from him, and it caved on him as much as he brought it down.

Hershman leaving left a big question at Showtime. And Espinoza was a questionable hire in many ways, one that had a lot to prove. And while you can't say he had a "clean slate," since obviously he was familiar with the boxing world having worked with Golden Boy, he had no real baggage. Maybe he has biases; maybe he doesn't. But whatever it is, Espinoza has made Showtime feel like a genuine competitor to HBO, and not just a network that has to focus on how to be different. They are now playing the same game. It's a competition now, however that came to pass.

Some of Showtime's standing is owed to the fact that Ken Hershman left them in good shape, too. But it's Espinoza who has brought the big boys over to play on the network, not Hershman.

If I had one serious complaint about what they've actually done this year, and not just spooky ghost stories about the damage an over-reliance upon Golden Boy Promotions could do sometime down the line, it would be that ShoBox: The New Generation has taken a real kick in the crotch this year. The series has lost its way. What once was a great place for prospects to be matched tough has turned into a place for Al Haymon to showcase guys like Jermain Taylor, whose time is well past gone; or Mayweather Promotions to put on Deandre Latimore and Jessie Vargas in Friday Night Fights-type matchups; or too often, stuff that just isn't interesting.

ShoBox may need to go, as sad as that might be. If they're not going to use it for its intended purpose, it's just a waste of money that could go to better cards that someone will actually watch. If Espinoza and the new regime aren't dedicated to using that series how it was supposed to be used, there's no real point to it. The network doesn't need its own version of Solo Boxeo Tecate or FNF. Whatever they air, I'll watch, but it doesn't seem like a useful way to spend money to me at this level. They don't need that type of series.

2013 will tell us a lot more about the direction of Showtime, and in turn, the directions of Golden Boy Promotions and Showtime's rival, HBO. If Showtime keeps breathing down HBO's neck, then that's good for everyone -- even the boxing fans that everyone says they serve, but, well, I won't even get started there. Competition between the networks will make both of them better.

And as long as Golden Boy stays the course of treating Showtime like a chance to do boxing the way it hasn't been done in recent years, and not a playground where they rule the four-square box, chances are everyone has to keep striving to do better and better.

That last part, though, remains the big "what-if."