Gary Russell Jr may take a little bit of stick for not facing better competition to date, but he generally leaves you wanting to see more, and did that again tonight, knocking out Roberto Castenda on a vicious right hook in the third round of tonight's ShoBox main event.

Russell (21-0, 13 KO) had his way from the get-go as expected, easily outclassing Castaneda (20-3-1, 15 KO), who tried but was just hopelessly overmatched. And that's not a shot at Castaneda, either. Russell is a truly special talent, an abnormally relaxed fighter with blinding hand speed, accuracy, and power that just looks better and better as he gets more experienced. The way that Russell can put shots together is something you can learn, but you have to have that natural ability in the first place. And he has it in spades.

This is a special young fighter, and the reason, I think, that some of us criticize his fights, is that we know that this guy is going to do the business. Impatience is heavy among boxing fans, and certainly I am one who has that flaw. But in Russell's case, I can say for myself that I'm impatient because this guy is ready to do real damage on the world stage. I'm itching to see Gary Russell Jr in the big fights, because I'm totally confident he's going to be successful. 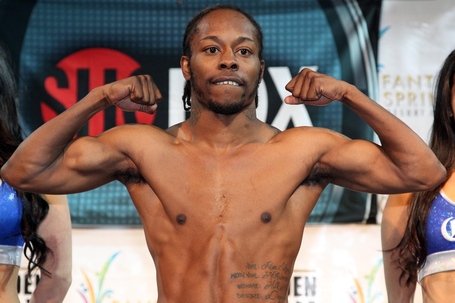 Rivera sported a meaty rat-tail, held close to the back of his head via athletic tape, and looked like he was way too into The Mars Volta. You might be able to guess how the fight went from that description. Warren was ruled to have suffered a knockdown in the third round, and his lack of power was noticeable given how much oomph he was putting into every shot he threw. It was a nervy debut, and those things happen. Basically it's hard to criticize much; these are pro debuts, and not all of them are pretty. 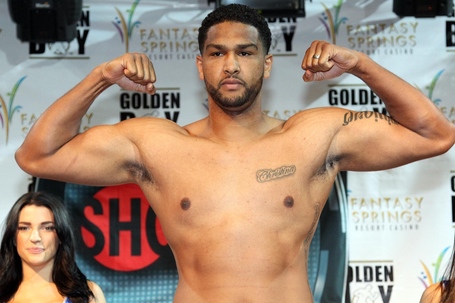 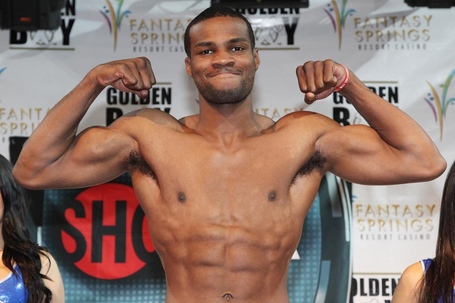 Ford was fighting about two weight classes too high, because it's super hard to find lousy fighters your own size. This being the third fight on the show, patience was starting to wear thin with most viewers I saw on Twitter, including chef Chris Santos from the Food Network's "Chopped." Ford didn't really want to engage after he got a taste of Browne's power and size and talent, but he made it into the third and before a body shot gave him all he needed to take a knee. He continued on, but only for a few more seconds. He basically accomplished nothing other than providing a body in the ring, and it's not his fault. He did the best he could given the circumstances.

Speaking of food, here's a plug for Mona's Cuisine. 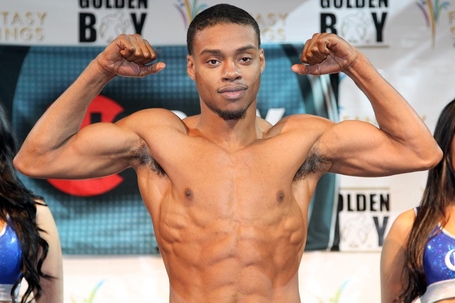 Garcia gave the night's best effort to this point, not that you could call him competitive. Spence was a little tight for two minutes, and after that he dominated. The finish came after Spence scored a knockdown on a series of clean shots, then was allowed to keep trying, which led to the finish moments later. Garcia was a tough kid, but Spence settled in and did his job. 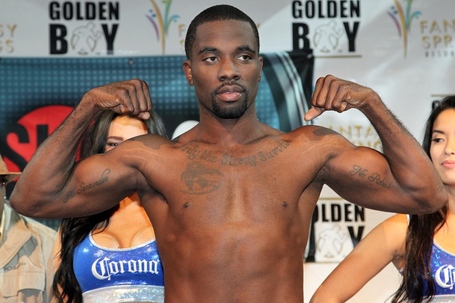 Caplinger had little to offer besides the guts to get in there. Gausha was patient and took him apart in short order.

These fights happen all the time, but we rarely see them. There's something to be said for there remaining some mystery about how pro boxing careers start -- not because we don't know, but we generally don't have to see it, and thus it is easy to ignore as a reality we don't want to focus on very much. I don't really want to see how my hamburger got to my plate, either. These are promising young fighters embarking on their careers. I'm not criticizing them, it's just not very compelling TV.

It won't matter in the long run. We'll all happily forget this later. We forget robberies and other horrible crap all the time, and we watch next week's fights, and we watch the same guys in their next fights. These are kids; babies in the sport. They've got a long road ahead of them. And really, I'm not sure we need to see their youngster flaws every fight. It was an experiment, and I'm not sure it was really necessary, but that's how you find out if things work or not. You do them, and you gauge how it went. This wasn't a disaster or anything.

Apart from the TV entertainment aspect, let's talk about the fighters briefly.

Breazeale is still a complete work in progress, but the raw athleticism is there for him. These transplanted football players never appeal to me off the bat, but Seth Mitchell has become a real fighter, and Breazeale will get time to work himself into being a real fighter, if he can get there. And for a guy who's 6'7", being able to move is big. He's not immobile or even stiff. There's plenty for him to learn, of course, but that can be said 20 fights into most pro careers, too. I cautiously believe he has some upside.

Warren is a great talent. I really believe in his physical ability. He's very quick, most notably. But his power is potentially a problem, particularly if he keeps fighting like he's a knockout puncher. I don't want to say he's mentally flawed, because an amateur career I saw bits of and one pro fight don't prove that to me, but there's just something not quite right about his approach, I think. Just my opinion. We'll learn a lot more about him.

Browne and Gausha are exactly what I expected: Solid already for their level, with plenty of upside. I'm not sure which of them I like better, but I like both of them.

Spence had the best debut, I think. Not only was his opponent the toughest of the lot in the end, but once he loosened up after those opening two minutes, he was impressive. He puts punches together nicely and has the instincts. He could go very far.