Wladimir Klitschko faces Mariusz Wach in Germany, while Robert Helenius returns to the ring in Finland against Sherman Williams this afternoon on Epix and EpixHD.com.

This afternoon starting at 4:30 pm EST on Epix and streaming live on EpixHD.com, a pair of heavyweight fights come our way in the United States, with Wladimir Klitschko defending his title belts against Mariusz Wach in Germany, while Robert Helenius returns to the ring in Helsinki, Finland. 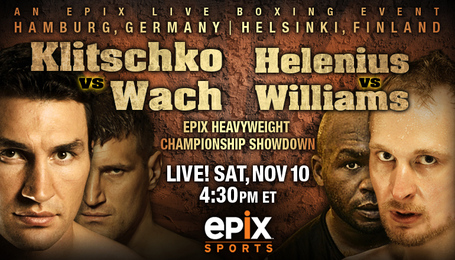 In the main event, Klitschko (58-3, 50 KO) will no doubt be fighting with a heavy heart but a lot of pride, as he takes to the ring for the first time in nearly a decade without longtime trainer and friend, the late Emanuel Steward. Wach (27-0, 15 KO) is also the first fighter Wladimir has ever faced who is truly bigger than he is, standing 6'8". Wach, though, is also not expected to give the favored man a lot of trouble, but there are some interesting wrinkles to this matchup.

Klitschko-Wach will be up first on the broadcast. After that, Helenius (17-0, 11 KO) will face Sherman Williams (35-11-2, 19 KO), set for 10 rounds. The 28-year-old Helenius had been building up some career momentum when he hurt his shoulder in a debated win over Dereck Chisora last December, and this is his first fight back. Williams isn't expected to give him much if any trouble.

BLH will be here with live coverage starting at 4:30 pm EST. The fights will also air on RTL in Germany (Klitschko-Wach) and 3+ in Denmark (Helenius-Williams).