Share All sharing options for: Broner vs DeMarco, Viloria vs Marquez, Froch vs Mack, more: Boxing TV schedule for Nov. 16-17 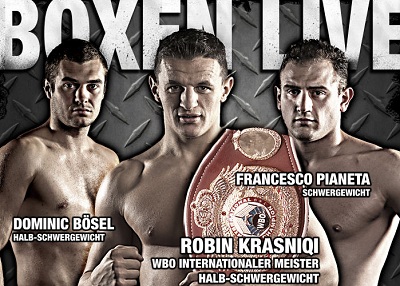 Das Vierte (Germany), 2:15 pm ET, Robin Krasniqi vs Max Heyman, Francesco Pianeta vs Nelson Dario Dominguez, Dominic Boesel vs Zoltan Kiss Jr. Krasniqi, you may recall, was a scheduled opponent for Nathan Cleverly earlier this year, but that fell through. It was a rotten fight, though better than Tommy Karpency and probably about on par with Shawn Hawk. Here he'll get another win. Pianeta is a heavyweight prospect of sorts, running recently on wins over Zack Page, Frans Botha, and Oliver McCall. Dominguez is only 35, so Pianeta is inching his way back toward fighting his own peer group.

SHO, 11:00 pm ET, Omar Henry vs Juan Ubaldo Cabrera, Angelo Santana vs Johnny Garcia. Omar Henry is legendary in his way, a fighter whose name has mostly been built in online circles and social media, suspected of buying the mass of his 177,000-plus Twitter followers (Abner Mares, for instance, has a little less than 11,000 followers), and I think he used to hang around the Lohans (as in Lindsay), and one time he talked about moving from boxing to MMA, and he's supposedly a monster in the gym, and he's been compared to Miguel Cotto, which may be his own doing more than anything. Anyway, he's headlining ShoBox. This was originally going to be Ishe Smith, then it was going to be James De La Rosa, and now it's going to be Juan Ubaldo Cabrera, an unbeaten, 33-year-old Dominican with a very soft record. The co-feature has Angelo Santana, an undefeated Cuban southpaw lightweight, taking on Michigan's Johnny Garcia, who upset Yordenis Ugas in March on ShoBox. Garcia was fun to watch and has a lot of heart, but two Cubans may be one too many for him to keep his "0." Bad Left Hook will have live coverage.

Integrated Sports PPV / Sky Sports (UK), 3:00 pm ET, Carl Froch vs Yusaf Mack, Tony Bellew vs Roberto Bolonti. Froch defends his IBF super middleweight title in what is supposed to be a final tune-up before taking on Lucian Bute in a Montreal rematch next spring. He's expected to win handily, but Mack is a fine boxer and for an easy fight, this isn't bad at all. Bellew is hoping a win over Bolonti will land him a shot at Chad Dawson and the WBC light heavyweight title. Bad Left Hook will have live coverage. 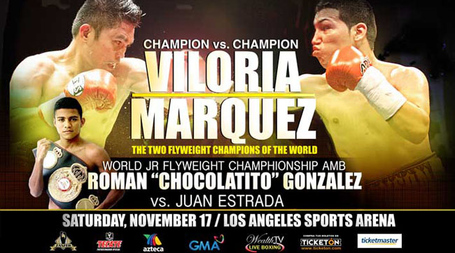 WealthTV / TV Azteca (Mexico) / GMA (Philippines), 9:00 pm ET, Brian Viloria vs Tyson Marquez, Roman Gonzalez vs Juan Francisco Estrada. Viloria-Marquez is the best fight to be made at flyweight, and it's on deck now. Kudos to WealthTV for picking up this excellent matchup, a fight fan's delight. Not only is it No. 1 vs No. 2 in the division, but both are good action fighters and could have a hell of a fight. Chocolatito Gonzalez is one of the most skilled fighters in the world today, and it's nice to see him get some U.S. exposure, too. We're going to try to do live coverage for this show, but no guarantees.

HBO / BoxNation (UK) / Main Event PPV (Australia), 10:00 pm ET, Adrien Broner vs Antonio DeMarco, Seth Mitchell vs Johnathon Banks. Speaking of great fights, here's another one. Broner-DeMarco came together fairly easily follow DeMarco's destruction of John Molina on September 8, and that means we've got a terrific lightweight matchup, with Broner moving up in weight and looking to claim a world title in a second weight class at age 23. It's a fight that has brought out some very confident picks in both fighters; many feel Broner will overwhelm DeMarco, and many feel DeMarco might be the exact right guy to "expose" Broner's flaws again. Mayhem Mitchell is in the co-feature against Johnathon Banks, who just trained Wladimir Klitschko in his win over Mariusz Wach. Banks isn't a true contender, but he's a very competent fighter, and Mitchell had a scare with Chazz Witherspoon. Never forget that Mayhem is still a work in progress, even though he's getting easy street in terms of exposure and fanfare. Bad Left Hook will have live coverage.