Tony Bellew suffered a bad cut early in his fight with Roberto Bolonti, but was able to easily outclass the Argentine fighter anyway, winning a wide decision.

Tony Bellew suffered a bad cut early, but a combination of having a great cutman in Mick Williamson and an inferior opponent in Roberto Bolonti made for a routine night in the ring, as the Liverpudlian won a wide decision on scores of 120-106, 120-106, and 119-107. Bad Left Hook scored it 120-106 for Bellew.

Bellew (19-1, 12 KO) scored knockdowns in the first and third rounds, but was unable to keep on the gas after suffering the cut, wisely choosing to box a bit more cautiously to protect himself against a stoppage loss, had Bolonti been able to worsen the gash.

But Bolonti (30-2, 19 KO) simply didn't have the ability to do much of anything, landing a whopping 39 punches over the 12 rounds of action, never threatening Bellew in any real way. He was slow, inactive, and reluctant to let himself go open for return shots from Bellew.

The cut itself was certainly no joke: 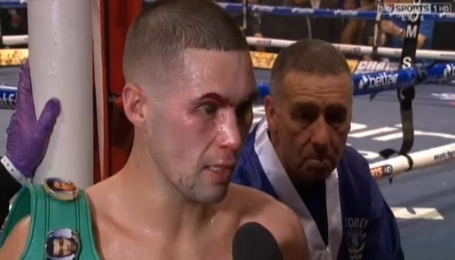 Bellew will now move up in the WBC rankings, as Bolonti was ranked No. 5, and this fight was for the vacant silver title at light heavyweight. He's said he wants to fight champion Chad Dawson, but that would be a long way off if it's ever going to happen at all. Dawson is currently slated to face Jean Pascal in March, and Bellew's going to need a bit more to his game before he steps to that level, anyway.

Overall, though, a quality performance from Bellew, who started a bit wild, but took the cut seriously, settled in, and won the fight as he had to do.

Our live coverage of 'True Brit' continues, with the Carl Froch vs Yusaf Mack main event up next.