Juan Manuel Marquez: 'The second fight with Manny Pacquiao was the closest'

Juan Manuel Marquez looks back on his second fight with Manny Pacquiao, which took place in March 2008. The Mexican star considers it the closest of their three bouts to date.

Share All sharing options for: Juan Manuel Marquez: 'The second fight with Manny Pacquiao was the closest'

"In my opinion the second fight was the closest of our trilogy. It was a very hard-fought fight and much more exciting than the first one.

"This time Pacquiao surprised me a bit as he was not as aggressive as he had been in the first fight. He seemed to have become a more complete and certainly a much better all-around fighter. He was no longer a one-handed fighter like he was the first time we fought. The left-hand-happy Pacquiao had become a two-fisted fighter, using his right effectively.

"I was able to control the first half of the fight by dictating the pace and I was able to build a lead. I felt that I was hurting him which made me more confident, so I became a little more aggressive and it cost me as I caught with a left hand and went down in the third round. I was angry at myself but I was not hurt. 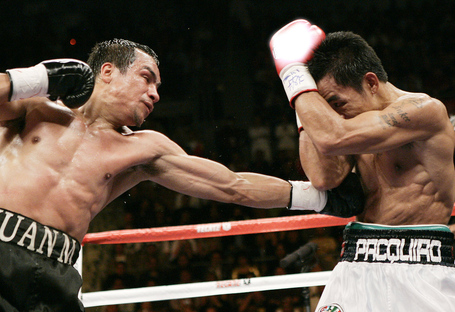 "The last six rounds were very competitive and I felt he was trying very hard and I was able to counter him very effectively. I was landing a lot of right hands and knew I had the fight won.

"But once again the judges took my victory away by giving Pacquiao the nod by split decision. I still get very angry when I think about hearing those scores being read.

"After two fights I felt I had won at least 19 of the 24 rounds. Pacquiao's four knockdowns made the scores closer than they really were. Look, after 24 rounds, I have two scores in my favor and one even and Pacquiao's got three his way but one of them was by only one point.

Episode #2 of the all-access reality series "24/7 Pacquiao/Marquez 4" premieres Saturday, Nov. 24 at 12:15 a.m. ET/PT on HBO. Episode #1 can be seen on HBO ON DEMAND® and HBO GO® in addition to multiple replays on the network. The four-part series premieres on three consecutive Saturday nights before the finale airs the night before the welterweight championship showdown in Las Vegas.

Pacquiao vs. Marquez 4 takes place Saturday, December 8 from the MGM Grand Garden Arena in Las Vegas and will be produced and distributed live by HBO Pay-Per-View beginning at 9:00 p.m. ET/ 6:00 p.m. PT.