Manny Pacquiao: 'The second fight was a clear victory for me'

Manny Pacquiao looks back on his second fight with Juan Manuel Marquez from 2008, saying it was an electric atmosphere, and a clear win for him over his rival.

Share All sharing options for: Manny Pacquiao: 'The second fight was a clear victory for me'

"I was looking forward to my rematch with Juan Manuel Márquez. Our first fight had been exciting and even though it took a few years for Márquez to finally accept a rematch with me the fans seemed happy to see it too. The arena was electric. It inspired me.

"After I scored the knockdown, early in the fight, I went back to my corner thinking I would finish him in the next round. Freddie Roach told me, ‘We have him right where we want him. Finish it."

"Well, I couldn't finish him in the next round and as the fight continued I thought ‘Here we go again.' Márquez's superb boxing skills and excellent stamina got him back into the fight.

"After the eighth round Freddie told me the fight was becoming too close and we needed to win the last four rounds to avoid the close decision we had in our first fight. 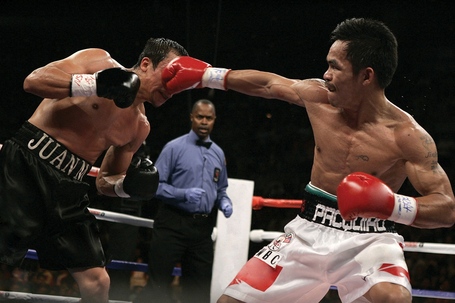 "'Take it to him Manny. Pick up the pace - double the pace. You've got the better speed and power. It's time to use all your weapons.'

"I stopped counterpunching in those last four and attacked him constantly. Staying away from his right hand helped me to score more too.

"Freddie's advice was right and I thought it was a clear victory for me that night because I won those last four rounds.

"I was so happy to be a world champion again. It's a night I'll never forget."

Episode #2 of the all-access reality series "24/7 Pacquiao/Marquez 4" premieres Saturday, Nov. 24 at 12:15 a.m. ET/PT on HBO. Episode #1 can be seen on HBO ON DEMAND® and HBO GO® in addition to multiple replays on the network. The four-part series premieres on three consecutive Saturday nights before the finale airs the night before the welterweight championship showdown in Las Vegas.

Pacquiao vs. Marquez 4 takes place Saturday, December 8 from the MGM Grand Garden Arena in Las Vegas and will be produced and distributed live by HBO Pay-Per-View beginning at 9:00 p.m. ET/ 6:00 p.m. PT.