Robert Guerrero and Andre Berto both made weight for tomorrow night's welterweight clash on HBO.

Robert Guerrero weighed in at 146.4 pounds, with Andre Berto at 146.8, meaning tomorrow night's welterweight clash on HBO is good to go. 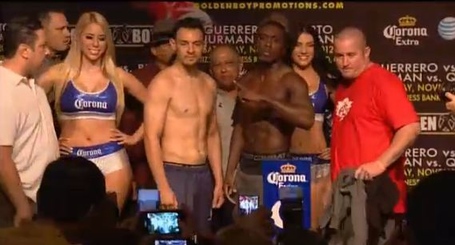 Guerrero (30-1-1, 18 KO) will be defending the interim WBC title against Berto (28-1, 22 KO), who is coming back from 14 months out of the ring, a biceps injury, and a VADA test failure. Guerrero last fought in July, beating Selcuk Aydin on Showtime from San Jose. 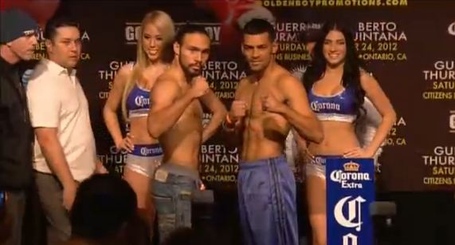 In the HBO co-feature, Keith Thurman (18-0, 17 KO) and Carlos Quintana (29-3, 23 KO) both made weight for their 152-pound catchweight bout. Quintana, a former welterweight titleholder, came in at the 152-pound mark, while prospect Thurman, who is coming up from welterweight, weighed in at 151.6.

Bad Left Hook will have live round-by-round coverage of the Berto-Guerrero card on HBO tomorrow night, starting at 10 pm EST. BoxNation will also carry the fights live in the United Kingdom.

Berto vs Guerrero results: Robert Guerrero slugs through 12-round win over Andre Berto