Miguel Cotto has fought seven times at Madison Square Garden in his illustrious career, and won each time. On Saturday night, he puts that streak on the line against Austin Trout, hoping to stay unbeaten at 'The World's Most Famous Arena.'

Miguel Cotto faces Austin Trout tomorrow night on Showtime, returning "home" to Madison Square Garden, a building that has housed some of his biggest fights, greatest wins, and also a building where he's sold over 100,000 tickets in his storied career.

The 32-year-old Cotto will look to defend his adopted home turf against a rising young titleholder and a man looking to make his mark on the sport, and also to keep his unbeaten (7-0) career record at the Garden intact. Will he make it 8-0, or will Austin Trout make it 7-1?

Here's a look back at Cotto's previous Garden battles.

Miguel Cotto's Madison Square Garden run started on the weekend of the National Puerto Rican Day Parade in New York, which would become a familiar weekend for him to headline the Garden. The opponent was Uzbekistan's Muhammad Abdullaev, who had defeated Cotto at the 2000 Olympics in Sydney, Australia.

With a crowd that the New York Times wrote was so pro-Cotto that the fight "could well have been taking place in San Juan," the unbeaten rising star from Puerto Rico kept his "0" and successfully defended the WBO junior welterweight title for a third time, stopping Abdullaev in the ninth round. At the time of the stoppage, he was ahead on all three scorecards, 79-73, 79-73, and 78-74.

It was pretty clear that Miguel Cotto could be a New York star, and that the Garden could be a familiar haunt for him, even in his first bout at the building. 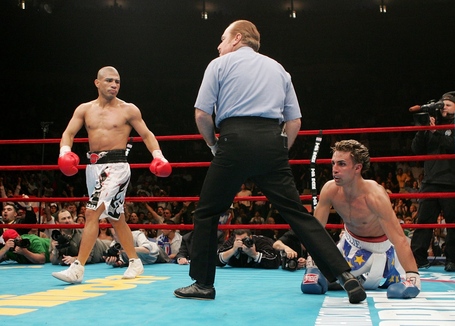 Trash-talking Brooklyn native Paulie Malignaggi was next to face Cotto at the Garden, the following year on the same weekend. With Malignaggi a New York native and Cotto a favorite adopted son of the city, the crowd was even better than it had been the year before.

So was Cotto's performance. While he was pretty dominant against Adullaev and got a stoppage win, his 12-round thrashing of Malignaggi was a truly fearsome performance. The Puerto Rican won on scores of 115-112, 116-111, and 116-111, scoring a second round knockdown and inflicting serious damage upon Malignaggi's face, resulting in the "Magic Man" leaving with a broken orbital bone.

It was actually sort of a turning point for Malignaggi, too, as his incredible toughness and durability helped many overlook his more obnoxious personality traits, which have also been toned down over the years. But the night's winner was definitely Miguel Cotto, improving to 2-0 at the Garden. 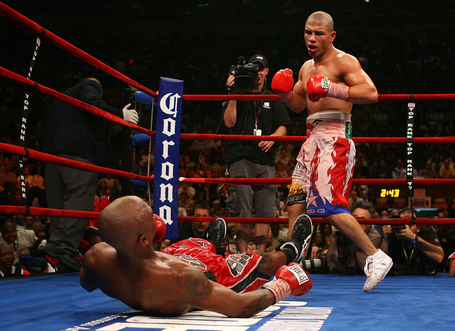 Now a welterweight, Cotto went back on that second Saturday in June again, facing another big-mouthed Brooklyn native, Zab Judah. "Super" Judah's career had taken a turn for the worse in 2006, as he was stunningly upset by Carlos Baldomir, losing his welterweight championship, and then went ahead with a scheduled fight against Floyd Mayweather, clearly losing that one as well, and winding up suspended for his role in the in-ring brawl between the corners.

After a year off, Judah returned in April 2007 to face Ruben Galvan, a fight that wound up cut short after a round due to a cut. But he marched forward for a money fight with Cotto, and was considered a live underdog. Still a fast southpaw with power, Judah did give Cotto some tough looks in the fight, but ultimately, Cotto wound up turning the fight into a brawl when he needed to -- and giving Judah a few shots south of the belt line that some feel really turned the tide -- and had more of a stomach (and less shots to his groin) for the nastiness in the end.

Cotto stopped Judah in the 11th round, leading 97-91 on each judge's score card, when referee Arthur Mercante Jr stepped in to stop the assault on a reeling Judah. 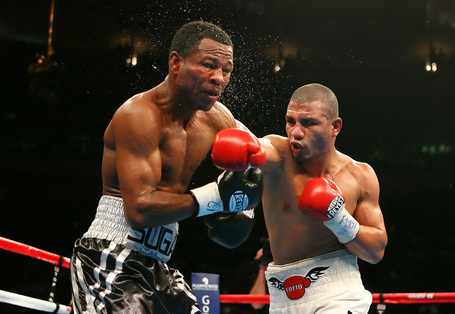 Cotto's first close call in the Garden came five months after the Judah fight, as he went back to his new big fight home for the second time in 2007 to face "Sugar" Shane Mosley, in one of the few Top Rank and Golden Boy co-promoted fights.

A bigger welterweight than Judah, Mosley had returned to the division for real against Luis Collazo, winning a wide decision in February 2007, after a so-so stint at junior middleweight. Cotto was still unbeaten and had been on an obvious tear, plowing through his opponents and becoming an HBO favorite, and a fighter making his place in Puerto Rico's rich boxing history.

Mosley gave Cotto all he could handle, though. The two went at it back-and-forth for the full 12 rounds, neither allowing the other man to build any serious momentum. When the dust settled, Cotto won on scores of 115-113, 115-113, and 116-113. There was some call for a rematch between the two, but it never happened. 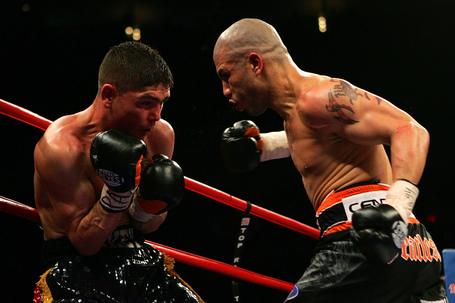 Though the opponent wasn't particularly notable and nobody expected Miguel Cotto to lose to Michael Jennings, a competent but mid-level welterweight, this was one of the more important nights of Miguel Cotto's career. In July 2008, Cotto lost a war for the ages in Las Vegas to Antonio Margarito, dropping his WBA title and losing for the first time in his pro career.

A month before Cotto-Jennings, Margarito and team were caught using tainted hand wraps in the locker room prior to Margarito's one-sided ass-kicking at the hands of Mosley, opening up a world of speculation about whether or not Margarito had been loaded up for the Cotto fight, where he was outboxed for much of the bout but came roaring back with ferocious power punches that eventually felled Cotto, and forced the Puerto Rican to essentially quit in the 11th round.

Would there be rust on Miguel Cotto? Would he be trigger shy? How would he react to getting hit? All of the questions were brushed aside as Cotto crushed Jennings in five rounds, leading 40-34 on all three cards when the fight was mercifully stopped. Jennings, a brave fighter who stood in as best he could, was simply outclassed and underpowered as a Cotto foe, and the big questions would have to wait. 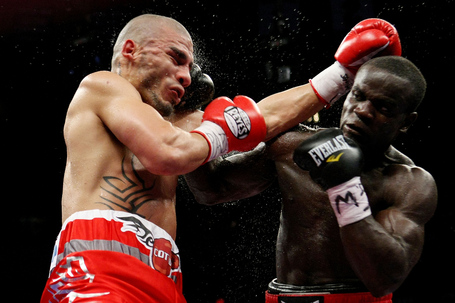 Joshua Clottey gave us a few more answers when he and Cotto met in June 2009, four months after the Jennings bout. This is the one fight in Cotto's Madison Square Garden history where a sizable chunk of the viewing audience feels that Cotto was probably lucky to be fighting on friendly soil, as his split decision win is still hotly debated whenever the fight is brought up.

Clottey, an extremely sturdy Ghanaian who figured to test Cotto in a good fight, well, tested Cotto in a good fight. Battling through his own blood, Cotto hung in with a physically strong welterweight who didn't budge on many shots, though a flash knockdown early on a jab gave Cotto's fans a reason to go ballistic.

After that, it was a tense, rugged affair, won by Cotto on scores of 116-111, 115-112, and 113-114. Clottey felt he'd won, and many out there agreed with him. But it was Cotto's turf, and he was the star, getting the benefit of the doubt in basically all the close rounds, it would seem. Cotto has never come closer to losing at the Garden. 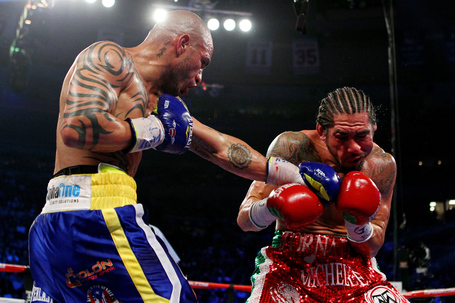 Revenge. After years of saying he'd never fight Antonio Margarito again, or allow Margarito to make any money with a rematch, Miguel Cotto accepted the fight at the insistence of Top Rank and Bob Arum, who badly wanted to stage the fight and capitalize on Margarito's notoriety before he was unable to make them any more money.

The build-up to the fight was like nothing you'll see again any time soon. There was an intense, burning fire coming through in all of Cotto's words, and Margarito played an exploitation flick villain on HBO's "24/7" series dedicated to the fight.

There were fans who refused to pay attention or watch the fight -- or, at least they said that's what they weren't going to do. There was also a chapter of the pre-fight build that saw worry over whether or not Margarito and his damaged right eye would be allowed a license to fight in New York. In the end, he was licensed, and Miguel Cotto shut that eye to the point that referee Steve Smoger called the fight off after 10 rounds. Cotto had largely dominated the fight, leading 89-82 on each judge's score card.

Cotto-Margarito II was the end of an era, as Miguel's contract with Top Rank expired, and he chose to strike out on his own. He's worked with Golden Boy Promotions for his fights since then, facing Floyd Mayweather in May, and tomorrow night on Showtime, Austin Trout.

But either way it goes down, Miguel Cotto has established himself as a significant figure in the history of "The World's Most Famous Arena." Boxers don't draw the way they used to, and boxing isn't the significant piece of MSG that it was "back in the day." And that's what makes Cotto's status there as an attraction even more significant than we might realize.