Arturo 'Thunder' Gatti, Virgil Hill, and Myung-Woo Yuh head up the 2013 International Boxing Hall of Fame class, and will be inducted in June.

Arturo "Thunder" Gatti, Virgil Hill, and Myung-Woo Yuh will be inducted into the International Boxing Hall of Fame in June 2013. The announcement was made today.

Gatti, who retired in 2007 and sadly died in 2009 at the age of 37, won four RING Magazine Fight of the Year awards (1997, 1998, 2002, 2003) and is probably best-known for his heart-pounding, brutal trilogy with Micky Ward, a man who eventually became his close friend and even trained him for what turned out to be his final fight.

There was some healthy debate over whether or not Gatti, who retired with a record of 40-9 (31 KO), really deserved induction into the Hall of Fame. While nobody denied that he was one of his era's most beloved and memorable fighters, there will remain many who feel that he didn't achieve quite enough; that he fell short of greatness.

Ward, I think, sums up why Gatti was voted in:

"He gave it all in the ring. He gave everything to the sport of boxing. He gave the fans what they wanted."

Few fighters of his time experienced the sort of loyalty and fan devotion that Gatti had in Atlantic City, where he became something of a folk hero thanks to his wars at Boardwalk Hall. Over his 16-year pro career, Gatti shared the ring with the likes of Ward, Floyd Mayweather, Oscar De La Hoya, Tracy Harris Patterson, Ivan Robinson, Angel Manfredy, Gabriel Ruelas, and many other notable names. His Fight of the Year winners came against Ruelas in 1997, Robinson in 1998, and Ward in 2002 and 2003. 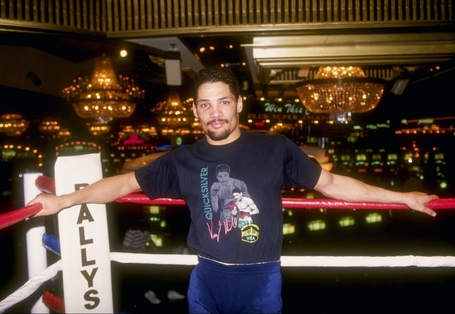 Virgil Hill won the middleweight silver medal at the 1984 Olympics and turned pro in 1985. He quickly moved up to light heavyweight, and became one of the finest 175-pound fighters of his era. From North Dakota, Hill turned cities like Bismarck and Fargo into unlikely world title fight hubs in the late 1980s and early 1990s.

Hill retired in 2007 following a pair of losses in Germany to Henry Maske and Firat Arslan, at the age of 43. "Quicksilver" left the sport with a career record of 50-7 (23 KO), and fights against Maske (obviously), Thomas Hearns, Roy Jones Jr, Dariusz Michalczewski, and many others.

“It is the biggest honor that’s ever been bestowed upon me. It’s more than winning the five world titles and the Olympic silver medal. It’s the biggest thing – outside of my children and wife – that’s ever happened to me. It’s such an honor. I know this would have meant so much to my father. He passed away a year ago and this was a big thing for him. I’m so happy. You have no idea.”

Myung-Woo Yuh is an inductee many diehard fans will be thrilled has finally gotten his due. He had a relatively short career, from 1982 to 1993, winning the WBA light flyweight title in 1985 and holding it until his retirement, outside of one year from late 1991 to late 1992, after he dropped the belt to Hiroki Ioka. It was his only career loss, and he retired with a mark of 38-1 (14 KO).

"Thank you so much. I feel honored and I’m proud as a boxer. I would like to share this happiness with all of the boxers."