Nonito Donaire faces Jorge Arce, Amir Khan returns against Carlos Molina, boxing comes back to network TV in the United States, and plenty of notable names are in action this week, which will also include HBO's replay of Pacquiao vs Marquez IV. 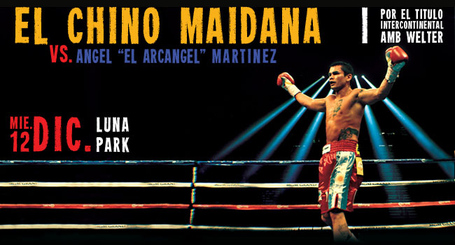 TyC Sports, 8:00 pm EST, Marcos Maidana vs Angel Martinez. This is a pure stay-busy fight for Maidana, who is facing a guy that Lucas Matthysse finished off in six rounds back in February. Since then, Martinez has been knocked out by Jimrex Jaca.

WealthTV, 7:00 pm EST, Jean Pascal vs Aleksy Kuziemski, David Lemieux vs Albert Ayrapetyan, Eleider Alvarez vs Danny McIntosh. LOOK! Jean Pascal! He's really going to fight! (Knock on wood!) This is a solid comeback fight for the former 175-pound champ, as Kuziemski isn't really very good, but he's competent. The other two matchups are meant to be showcases for Lemieux and Alvarez. Lemieux is always one second away from wrecking someone, and he's vulnerable, too, so he's fun to watch. Alvarez is facing the UK's McIntosh after Edison Miranda bailed on the fight, which works fine for me. Miranda wasn't going to win, and plus we would have had to hear him call out Pascal all week, probably. McIntosh has lost his last two by stoppage, but they were against Tony Bellew and Eduard Gutknecht. BLH will have live coverage.

BoxNation (UK), 2:00 pm EST, Ricky Burns vs TBA, George Groves vs Glen Johnson, Billy Joe Saunders vs Nick Blackwell. Burns once again needs a new opponent, and it wouldn't be shocking if he just can't find a fight for Saturday, but they're trying. Groves-Johnson is a crossroads fight of sorts, but given that Johnson just lost pretty convincingly to Andrzej Fonfara and he's about to turn 44, Groves will be the heavy favorite here, and should be. Johnson is a guy everyone likes, but he seems to have hit the wall. BLH will have live coverage.

ARD (Germany) / BoxNation (UK), 4:15 pm EST, Arthur Abraham vs Mehdi Bouadla. Abraham makes the first defends of the WBO title he won from Robert Stieglitz, and gets a bit of a soft touch in Bouadla. Don't get me wrong here: Bouadla is game and not some total chump, but he failed pretty conclusively trying to hang with Mikkel Kessler in June 2011. BLH will have live coverage.

CBS, 4:30 pm EST, Leo Santa Cruz vs Alberto Guevara, Joseph Diaz Jr vs TBA. Boxing returns to network TV with Leo Santa Cruz, one of the most exciting young fighters in the sport, headlining against an opponent he'll be favored to dominate. Joseph Diaz Jr is one of the more promising U.S. Olympians from London, and is making his pro debut. BLH will have live coverage.

TyC Sports (Argentina), 8:00 pm EST, Omar Narvaez vs David Quijano. This is Narvaez's preferred level of title challenger, a decent fighter who likely poses no major threat. He's still unbeaten at 112 and 115 pounds (he's defending his 115-pound title in this one), with his only loss coming at 118 to Nonito Donaire, a shrewd business move more than any super serious effort in the end, one that made Narvaez a bit of money and didn't damage his reputation at home.

SHO Extreme, 9:00 pm EST, Shawn Porter vs Julio Diaz, Frankie Gomez vs Pavel Miranda. You'll get a chance to eat some dinner and all that between the CBS show ending and the SHO Extreme broadcast starting. Porter looks to stay unbeaten in a 10-round welterweight bout against ex-lightweight titlist Diaz, who has won two straight after getting smashed by Kendall Holt in 2011. Miranda is 2-7-1 in his last ten, but isn't a bad test for Gomez, a legit prospect who has had some issues outside of the ring. BLH will have live coverage. 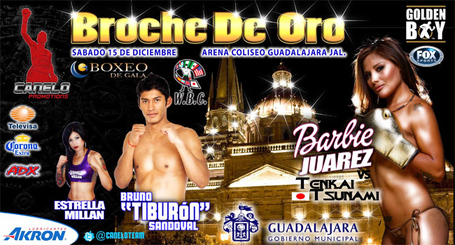 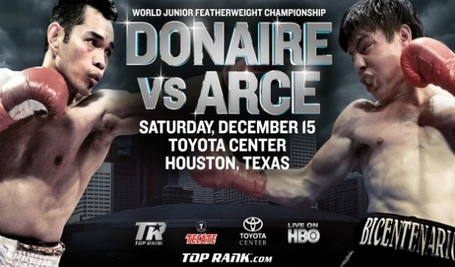 HBO / BoxNation (UK) / TV Azteca (Mexico), 9:30 pm EST, Nonito Donaire vs Jorge Arce, Guillermo Rigondeaux vs Poonsawat Kratingdaenggym, Manny Pacquiao vs Juan Manuel Marquez IV (replay). Donaire looks to potentially lock up the 2012 Fighter of the Year award here against Arce, an opponent they've talked about having him fight for a couple of years now. It's finally here, and though Arce is and should be a big underdog, he's been in that role before and made it. He seems tailor-made for Donaire, but at least it almost surely won't be dull. Rigondeaux takes on a tough firecracker in Poonsawat, and it will be up to Poonsawat to bring pressure and make this a fight. BLH will have live coverage.

SHO / Sky Sports (UK), 10:30 pm EST, Amir Khan vs Carlos Molina, Alfredo Angulo vs Jorge Silva, Deontay Wilder vs Kelvin Price. Pretty ballsy to go live with three fights at 10:30, but that's basically a PPV schedule, so it's nothing huge. Also, there's a pretty good chance neither of the first two fights last long. Wilder talks a lot, and so does his management team, and it's easy to see why his record gets flak, but is it really worse than Seth Mitchell's record ever was? Wilder has serious monster power in his right hand, and he's filled out nicely after earlier being sort of a beanpole. Scoff if you wish, but he's got legitimate potential. Price is 6'7", like Wilder, so he won't be undersized, and the former basketball player is hoping to make a late go of it at age 37. He's unbeaten (13-0, 6 KO), but also hasn't done a lot since his controversial upset of Tor Hamer in May 2010. Angulo will likely blow Silva away -- Silva is game and tough, as he showed against Yoshihiro Kamegai, but he's undersized in this matchup. Khan-Molina is a must-win for Khan; and a breakout chance for Molina. BLH will have live coverage.