Jean Pascal's comeback fight didn't go exactly as he hoped it would, but he walked out the winner in Montreal despite injury his left shoulder in a fluke accident.

Jean Pascal got the win tonight, but it's possible that a reported March rematch with Chad Dawson could be in jeopardy. Pascal injured his left shoulder when he got his arm caught in the ropes in the fourth round, forcing him to fight only with his right hand for the majority of the bout.

Pascal (27-2-1, 16 KO) hadn't fought since May 2011, when he lost to Bernard Hopkins, and has dealt with left shoulder injuries in the past, notably in his rematch with Adrian Diaconu. But this wasn't anything but a fluke. Here's a shot of the injury occurring: 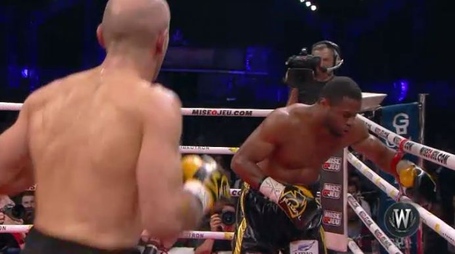 As you can see, he simply got his arm stuck while throwing a punch, which jerked the shoulder around. Total freak accident and nothing you can prepare for, but given the circumstances, he fought a pretty good fight here, and it helped that Kuziemski (23-5, 7 KO) more or less gave the rest of the fight away, sans for moments of Pascal inactivity.

With just his right hand -- and clearly so, at that -- Pascal managed to intimidate Kuziemski with enough hard right hands to control the fight. And though he expended a lot of energy throwing just right hand bombs, Pascal didn't gas terribly, though he did clearly get tired, understandably. He saved some energy for the 10th round and sealed the fight with a knockdown in that frame.

Whether or not Pascal moves on to fight again in March -- against Dawson or anybody -- remains to be seen. But he's back in the game, and the light heavyweight division is better for his presence.