NBC, 4:00 pm EST, Tomasz Adamek vs Steve Cunningham II, Tor Hamer vs Vyacheslav Glazkov. Boxing's lone big fight event of the weekend is also its return to NBC. Geez, can you believe it? After all these days, boxing is back on network TV. I just -- it's surreal, you guys. But in all seriousness, this is a must-see heavyweight fight, a rematch of a 2008 cruiserweight classic, and you all already know that, but just in case you're like, "Dang, I could watch some bowl game or something," you just need to know that you should really tune in for this one. Hamer-Glazkov is also a nice matchup. Bad Left Hook will have live coverage. 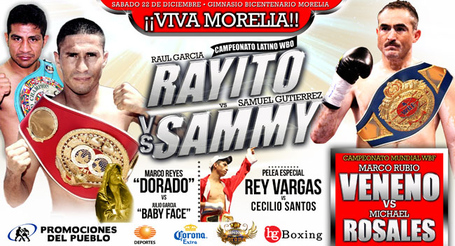 Televisa (Mexico), 10:00 pm EST, Raul Garcia vs Sammy Gutierrez, Marco Antonio Rubio vs Michel Rosales. Garcia remains a strong contender in the 108-pound ranks, and Gutierrez isn't chopped liver or anything. It's a good matchup. Then you have Rubio, who's now a "super middleweight" with something called the "WBF championship," defending a 168-pound belt of no importance against natural welterweight Michel Rosales. It's a farce of a fight, just like Rubio's "title" winning performance against fat old Carlos Baldomir in September. After world title failures at 160, Rubio has apparently just decided to live in a fantasy world where he's a super middleweight king. Whatever makes you happy, dude.

Telefutura, 11:00 pm EST, Abner Cotto vs Sergio Perez. Cotto is Miguel's younger cousin, and the jury is out, but he's at least a decent prospect. Perez is a veteran and a fine next step for him.