John Molina and Dannie Williams want to get into the mix at 135 pounds, and will square off in the January 11 ESPN Friday Night Fights main event from Santa Fe.

The new season of ESPN Friday Night Fights is just around the corner, kicking off on January 4, and on January 11, two lightweights on the brink will go head-to-head from Santa Fe, New Mexico, as John Molina faces Dannie Williams in the main event.

Both Molina (24-2, 19 KO) and Williams (22-2, 18 KO) are fighters worth tuning in to see, not afraid to bring action, and both possess knockout power. Molina, 29, was blitzed in just 44 seconds last time out, when he lost to Antonio DeMarco in the Ward-Dawson co-feature on HBO, and the Covina, California, fighter knows that he needs to win to get himself back into the world title picture.

Williams, 28, is a Jack Loew-trained fighter originally out of St. Louis, and now fighting out of Youngstown, Ohio. He won his last bout in October, but prior to that was frankly outclassed by Hank Lundy on Friday Night Fights in March, losing a wide 10-round decision.

"I've been waiting to get back into a meaningful fight," Williams said from training camp via press release, "so I can get back in the lightweight picture. That's what this fight is all about. I look at this fight like all of my fights as the biggest of my life." 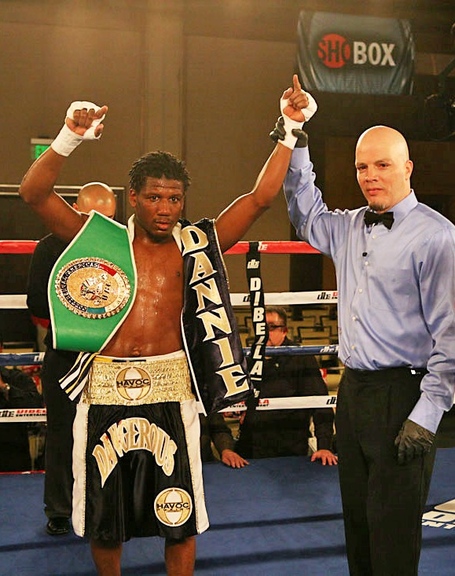 Loew, who led Kelly Pavlik from the gym to the world middleweight championship, says he's doing his best to impress upon Williams just what this fight means for his career. "This is a crossroads fight for both fighters. This isn't like being a cat with nine lives," he said.

"This fight could mean the difference between ever getting a world title shot or not. I've let Dannie know what this fight means and the pressure is on him to win. Dannie has to be professional and go into this fight in a better mind set than he did against Lundy. He can't dance around and box. He has to come forward and be aggressive. Dannie Williams is always going to be a power puncher."

Williams adds that the fight has extra significance for him, as Molina holds a win over Lundy, which also aired on Friday Night Fights in 2010.

"I'm really up for this fight because he's the guy who beat the guy who beat me," Williams said. "I'm going to show the boxing world that my Lundy fight was a fluke. Molina's last fight was disappointing. I don't think he can take a big punch. It's not like Lundy can hit. DeMarco hit him with some good punches, but I can't wait to see how he reacts when I hit him."

Though victory on January 11 won't likely mean an immediate world title shot for either man, the fact is that a loss really knocks someone out of the race for the foreseeable future. Neither has a power promoter backing their play, and thus they must win and do so impressively against credible opposition to even have a hope at getting something big down the road.

Molina and Williams, at the moment, are made for one another.

Also featured on the card in Santa Fe will be Virgil Hunter-trained middleweight prospect Brandon Gonzales (16-0, 10 KO). Gonzales will face 34-year-old Texas scrapper Don Mouton (12-4-1, 10 KO), a strong puncher and tougher than his record would immediately make one think.