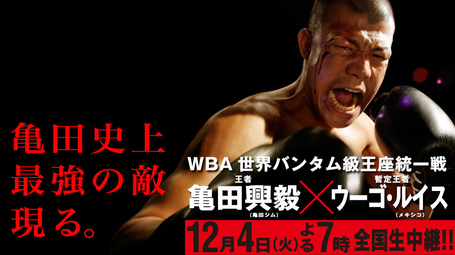 TBS (Japan), 5:00 am EST, Koki Kameda vs Hugo Ruiz, Daiki Kameda vs James Mokoginta, Tomoki Kameda vs Rey Las Pinas. Kameda makes the fifth defense of his WBA bantamweight title against Mexico's Ruiz (31-1, 28 KO), in what could be a pretty tough fight. The only loss of Ruiz's career was by stoppage, but it was also in 2007, when he was 21 years old. The other Kameda brothers are in should-win bouts.

ESPN2, 10:00 pm EST, Raymundo Beltran vs Ji-Hoon Kim, Jesse Magdaleno vs Jonathan Arrellano. Vegas is bustling this weekend, with two televised cards leading up to Pacquiao-Marquez IV on Saturday. This main event could be fantastic. Beltran is crafty, strong, and better than his record; I thought he deserved tight wins over Sharif Bogere and Luis Ramos Jr both, and he got the nod last time out against Hank Lundy. And this Kim fellow, all giving Bob Spagnola palpitations with his foreignness, is one of the most consistently entertaining TV fighters out there. Little brother Magdaleno may have a higher ceiling than Diego. Arrellano is coming off of his first career loss, to Roman Morales on September 21. Bad Left Hook will have live coverage.

Azteca America, 10:00 pm EST, Jessie Vargas vs Vito Gasparyan, Andy Ruiz Jr vs Elijah McCall. Diego Magdaleno was supposed to be in the main event here (it wasn't a good fight or anything), but he pulled out, and Vargas was called in. Something tells me Jessie Vargas was looking for more out of a move to Top Rank than an ESPN2 fight with Aron Martinez and a Box Azteca fight with Vito Gasparyan, but he'll get his chances next year, I suspect. Top Rank slow cooks their guys a lot lately. If Vargas hasn't taken tougher tests in six months, then maybe start to worry. Bad Left Hook will have live coverage.

Sky Sports (UK), 3:00 pm EST, Darren Barker vs Kerry Hope, John Ryder vs Eamonn O'Kane, Erick Ochieng vs Max Maxwell. This was a much better card when it was first put together, as Lee Purdy-Carson Jones was the main event, and that would have been very fun, and Gavin Rees-John Murray, also promising for action, was third on the bill. Now we've got Barker against Hope in the main event and a pair of fights bumped to the TV card that were meant as pure undercard fare. Ryder-O'Kane is actually a good prospect vs prospect bout, though. Bad Left Hook will have live coverage.

PPV (Denmark) / Sky Sports (UK - main event only) / Viasat Sport (Norway) / TV10 (Sweden) / DigiSport (Hungary) / Polsat Sport (Poland), 3:00 pm EST, Mikkel Kessler vs Brian Magee, Reda Zam Zam vs Guido Nicolas Pitto, Erik Skoglund vs Joe Ainscough. Kessler-Magee may be the sleeper fight of the weekend, as Kessler fights in Denmark are always fun at the least, due to the great atmosphere, and Magee can fight. Plus, Magee has beaten Mads Larsen and Rudy Markussen in Denmark in the last couple of years, so Mikkel's all fighting for his country's honor and what have you. Larsen and Markussen ain't Kessler, but this should be pretty entertaining. Bad Left Hook will have live coverage.

WealthTV / Channel 5 (UK), 5:00 pm EST, James DeGale vs Fulgencio Zuniga, Kid Galahad vs Ivan Ruiz Morote. DeGale says that Zuniga is better than George Groves, which first of all isn't true, and second of all, if it was, I guess that would mean DeGale is in trouble. Zuniga can punch a little, and he's faced good opposition, but he loses to his better opponents. DeGale should win without a lot of trouble, but if he lets himself get put on the ropes and banged at, who knows? Galahad is promising, and in on-paper easy with 32-year-old Morote of Spain. Bad Left Hook will have live coverage (we'll figure it out).

Bad Left Hook, 7:00 p.m. EST, Ernie Sanchez vs Coy Evans, Dodie Boy Penalosa Jr vs Jesus Lule Reya. These are from the off-TV undercard on the Pacquiao-Marquez show, and we'll have a live stream here on the site. You can also watch at Top Rank's site and probably Yahoo!, but I don't know why you'd even bother, not when it's RIGHT HERE ON BAD LEFT HOOK! Bad Left Hook will have live coverage.

HBO PPV / Primetime PPV (UK) / Main Event PPV (Australia) / TV Azteca (Mexico) / TV2 Sport (Denmark), 9:00 pm EST, Manny Pacquiao vs Juan Manuel Marquez, Yuriorkis Gamboa vs Michael Farenas, Miguel Vazquez vs Mercito Gesta, Javier Fortuna vs Patrick Hyland. There's going to be a lot more on this card in the coming days, with previews and updates and all that. We'll take a close look at the undercard, too. In short, I'm not going to say a lot about it right now. You know what it is. Bad Left Hook will have live coverage.

NBC Sports, 9:00 pm EST, Bryant Jennings vs Bowie Tupou, Jerry Belmontes vs Eric Hunter. On paper, this is by far the weakest of the Main Events/Peltz/NBC Sports shows this year, but it's understandable given they're running against a Pacquiao PPV and viewer numbers probably will greatly dip. Ryan Bivins will be on hand at Temple University.

Televisa (Mexico), 10:00 pm EST, Giovani Segura vs Glenn Donaire, Juan Jose Montes vs Sonny Boy Jaro. This is a pretty nice doubleheader as an alternative if you're not buying the PPV and you can get Televisa, and you aren't going to just steal the PPV, like some kind of crook, or villain. Segura is returning after a year off following his loss to Brian Viloria, facing Nonito's older brother Glenn Donaire, whose own return to active competition started a year ago. He's been solid since his return, and though he's coming off of a loss, is a decent comeback opponent. "Goofy" Montes is a TV regular and Jaro likes to fight, so that one's solid, too. If it happens. You never know. The world is just crazy sometimes, you guys...