Carl Froch has established himself as the top dog in UK boxing, but a mix of veterans and rising stars are coming up behind him in the British ranks.

If there's one thing I know about the internet, it's that people love lists. Actually, I know a lot more things about the internet, but I'd rather not risk offending anyone. With boxing news incredibly slow here at the end of the year, we need to talk about something, so there will be a bunch of top ten lists coming in the next couple of days, just for something to gab about. We'll start with the top ten fighters from the United Kingdom, pound-for-pound.

Another Note: I didn't include David Haye because his line is that he's retired if he doesn't fight Vitali Klitschko. So I say consider him retired unless that happens. I mean, I'd rank him in proper rankings in the heavyweight division until he's been inactive a year or formally announces a new retirement, but it felt pointless to put him on this list. 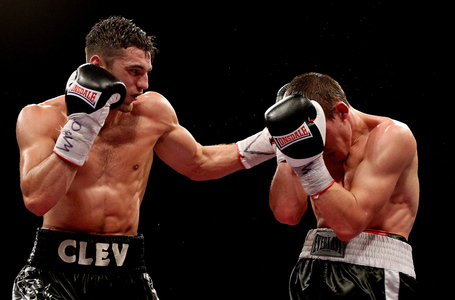 One of the hardest things about rightfully bashing the level of competition that WBO light heavyweight titleholder Nathan Cleverly, 25, has faced during his incredibly weak title reign is also trying to remember that he is a pretty good young fighter. Cleverly (25-0, 12 KO) has faced a who's-that of lousy opponents for what is called the "world level" since getting into the title scene, with wins over Aleksy Kuziemski, Tommy Karpency, and Shawn Hawk, with a title defense over Tony Bellew the best of his reign. All due respect to Bellew, who has proven himself better than many thought he was, even that was supposed to be an "easy" defense for Cleverly.

That it wasn't seems to have scared Cleverly's management right onto the path of least resistance. He'll face Robin Krasniqi next on March 16, which is frankly just another soft title defense, though it is a mandatory so must be dealt with, in mild defense of the matchmaking. If I could give any PR advice to Cleverly and promoter Frank Warren (not that they asked), their team has to stop talking up fights against the likes of Bernard Hopkins if there is no real indication that those bouts can or will happen; all it does is make Cleverly look bad for then scaling way back for his actual fights. 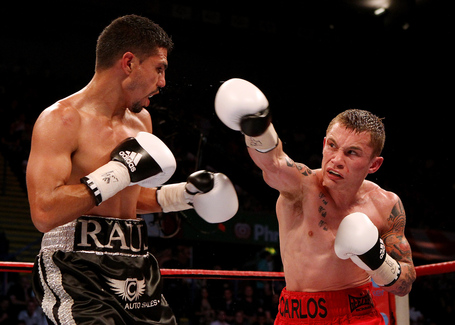 Barry McGuigan just kept pushing the kid, and people just kept doubting his upside. But the 25-year-old Frampton has made some believers, as he's fine-tuned his approach in recent outings and continued winning, opening some eyes with dominant wins over Mexico's Raul Hirales and former world titlist Steve Molitor. Next up will be his constantly-delayed shot at European super bantamweight champion Kiko Martinez.

Frampton (15-0, 10 KO) has been in something of a press battle with fellow 122-pound prospect Scott Quigg, with both sides giving a possible fight some lip service and little more, with each man's team proclaiming their young fighter the best in Britain at the weight. Quigg currently has at least a slight advantage, with a bit more experience and his win over Rendall Munroe, but Frampton has made it a legitimate discussion by continually improving in the ring. Maybe in 2013, we can find out for sure. 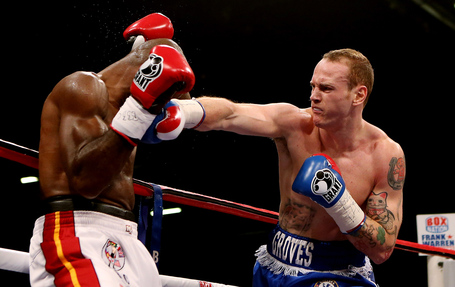 Groves, 24, has started to make his mark on the super middleweight division, but there are still plenty of steps to take before he's a serious contender on the world level. He lost a world title shot earlier in the year due to injury, which also cost him his British title, but he returned in July to outslug Francisco Sierra in California, and then came back to finish off the scraps that were left of Glen Johnson, pulling the aged fighter out of a brief retirement for some money and a chance to get shut out in London.

Groves (16-0, 12 KO) hasn't totally been able to capitalize on the buzz-generating win over longtime, real life rival James DeGale in 2011, as he's suffered a series of setbacks outside of the ring that have delayed his development to some degree, or at least his development for purposes of how he's perceived. 2013 should be the year where he looks to take on some tougher foes, but he's good enough that his next step or two up the ladder could -- and likely will -- look easy for him anyway. 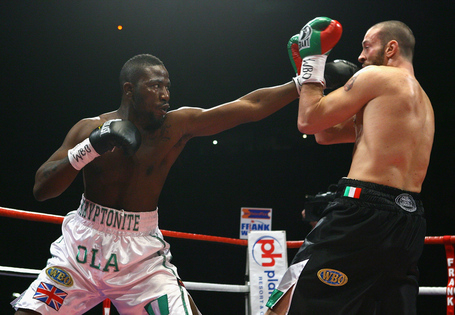 His record isn't pretty (19-2-4, 9 KO), he doesn't hold any world titles, and he's unlikely to become any kind of star attraction. But 32-year-old cruiserweight contender and Klitschko sparring partner Ola Afolabi can really fight, and if you need that proven to you, just watch his pair of fights with Marco Huck, where he's gone 0-1-1, but can easily be argued as deserving of the victory both times out.

Afolabi really grabbed some eyes with a ninth round knockout of Enzo Maccarinelli in 2009, after which he lost a close decision to Huck that December in Germany. Between that fight and his hard-fought draw rematch with Huck this year, Afolabi sort of floated around, beating weaker opposition. It's no surprise, though; Afolabi has an awkward style, more power than his KO% might suggest, and he's tough to look good against. He's one of those fighters who will really never get the chance to actually convince people he's as talented as he is. Even if diehard fans who watched thought he beat Huck both times, the history books won't say so. 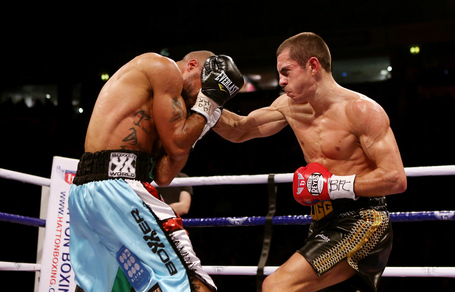 There are a lot of veteran, proven, top ten sort of fighters at 122 pounds I'd pick Scott Quigg to defeat right now. Namely, everyone that Nonito Donaire fought in 2012, I would pick Scott Quigg to beat them. Not easily, mind you; a fight with Wilfredo Vazquez Jr could be great fun, and Jeffrey Mathebula is far from an easy out, but I'd roll with Quigg, the talented, aggressive, and confident young star from Hatton Promotions.

Quigg (25-0, 18 KO) had a mild scare against scrappy veteran Jamie Arthur in February of this year, suffering a knockdown in the fourth round, but good fighters do get knocked down. What counts, of course, is what happens after the adversity. Quigg met the challenge head-on, storming back to stop Arthur in the eighth round, pretty much beating him without mercy until the referee stepped in. And after his first fight with Rendall Munroe, a proving grounds sort of bout, was unfortunately a fizzle due to a cut that led to a no-contest, the two hooked up in November, with Quigg retiring the veteran by punishing him to the body over six rounds. The 24-year-old Quigg probably won't be rushed right into it, but he's ready for the next step. 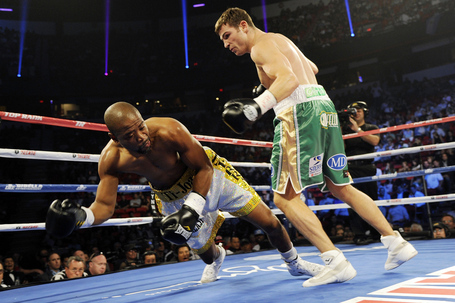 Matthew Macklin (29-4, 20 KO) probably has gained more respect worldwide for a pair of losses, one debatable and one admirable, than for any of his victories. There's no doubt that he can fight, as his 2011 split decision loss to Felix Sturm was a win in the eyes of most observers, and a shot at Sergio Martinez saw "Mack the Knife" fight very well until succumbing to Sergio's attack after 11 rounds.

Macklin, 30, is now basing his career in the United States with promoter Lou DiBella, and hoping to make a run at a world title again next year. The 30-year-old from Birmingham thrashed Joachim Alcine in just 2:36 on the Chavez Jr-Martinez undercard to keep his name in the mix, and there are plenty of good fights out there for him; he's an exciting, likable fighter, and he doesn't have problems like having a promoter who can't work with certain peers, or having an unappealing style, or looking like some unbeatable monster. 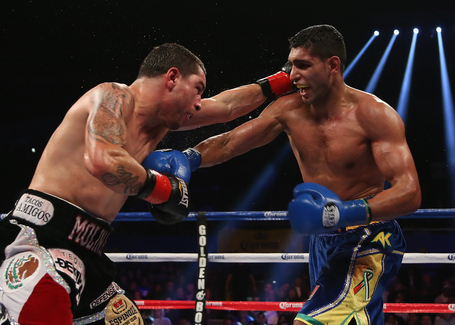 Amir Khan gets more negative press than positive, probably (at least when written by someone who isn't doing a press release), but then you make a list like this one, and, well, you realize he's quite good. Khan (27-3, 19 KO) didn't prove much with a win over undersized, overmatched Carlos Molina on December 15, but it was a win, and a win as good as anyone else below him on this list scored in 2012, save perhaps for Quigg's victory over Munroe.

It's also hard to ignore that Khan is still a top fighter at 140 pounds. Yes, he lost to Lamont Peterson, but would a pellet-less Peterson have lasted through a tough fight with Khan? It's legitimately debatable, and has nothing to do with boxing tool shop talk. Peterson cheated, plain and simple. Plus, a lot of people felt Khan deserved the win, anyway. It was already a questionable loss, not some clear-cut defeat. And his loss to Danny Garcia -- OK, yes, he got knocked out in a good fight against a good opponent. Would it be better if he'd beaten the Shawn Hawk of the junior welterweight division?

Khan is flawed, but so is basically every single fighter in the game today, or ever. He's also quite good. 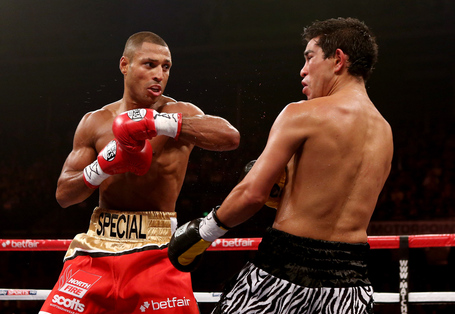 Brook is right on the cusp. If the 26-year-old beats Devon Alexander for the IBF welterweight title in Detroit on February 23, he's truly in the mix for all kinds of fights at 147. If he falls short, it's back to the drawing board; and if he falls well short, his credentials will be questioned.

Brook (29-0, 19 KO) did score a good win this year, though, battling through American Carson Jones in July, sandwiched by wins over Matthew Hatton in March and Hector Saldivia in October. The Matchroom fighter has done as much to earn a title shot as most anyone has to these days, and is prepared to travel for his first world title crack. If he wins, the hope will be that he doesn't hide the belt away, but a "victory lap" defense at home in Sheffield -- where he's become a draw -- would likely be expected. 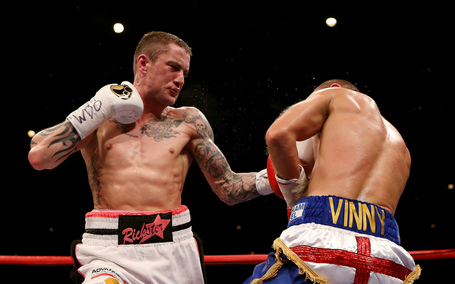 The lone Scot on the list, Burns (35-2, 10 KO) went 2-0 in 2012, with wins over former titlist Paulus Moses and a rather stunning physical domination of Kevin Mitchell. The 29-year-old from Coatbridge has solidified himself as one of the world's best lightweights, up there with Adrien Broner and Miguel Vazquez, as it stands now.

There is a lot of talk and hope for a Broner-Burns fight in 2013, though it won't lead the year for either man. Broner will first face Gavin Rees on February 16, while Burns is slated to return in late January, or at least that's the chatter, though he does not yet have an opponent or an official date booked. 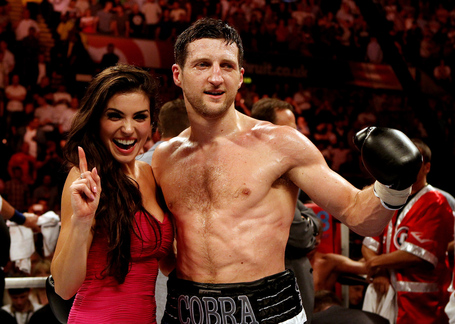 There can't really be any debate or question here, can there? While others have fallen by the wayside a bit (Khan, Haye), and some have yet to totally prove their standing (Brook, even Burns), Carl Froch, 35, just keeps plugging along.

He has clearly established himself as the United Kingdom's top fighter at the moment, and has plans to further cement that status in 2013, when he faces Mikkel Kessler in an attempt to avenge one of his two career defeats. "The Cobra" was once a bit of an also-ran, laughed off when he dared challenge Joe Calzaghe. Looking back, and knowing the kind of grit and determination Froch has, it sure would have been better to see those two fight instead of Calzaghe facing the shell of Roy Jones Jr and then retiring.