Boxing had a pretty damn good year overall in 2012, but the sport's politics and shadiness made for a lot of bad "world championship" fights anyway. Here are the ten worst of the worst.

Fans of most sports expect that when something is for all the marbles, the matchup will be quality. After all, both teams or both athletes had to earn their way there for the most part.

Boxing is not a big believer in this concept. In this sport, world title challengers can come from anywhere. Sure, many of them really deserve the opportunity, but many just plain do not, at least not in any sporting way. Whether hand-picked, cherry-picked, or forced in by one of the sport's moronic sanctioning bodies as a "mandatory challenger" -- be it as a favor or out of sheer dumbness -- there are a lot of world title fights in the boxing world today that are flat-out crap fights, for one reason or several of many possible reasons.

Note: Only fights for WBC, WBA, WBO, or IBF titles considered. WBA "regular" titles count, but interim belts do not. If you're wondering why, it's because none of this crap makes any real sense anyway, so just go with it. It's just a list. Relax.

Other Note: This list isn't a reflection of the quality of the actual fight on fight night, but of the matchup, and its recognition as a "world championship fight." 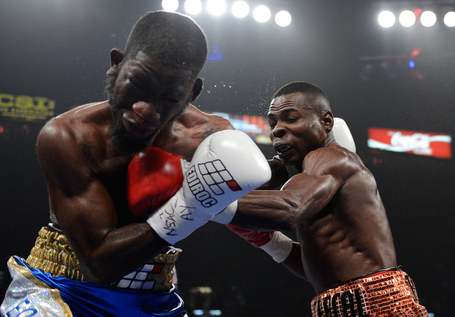 Rigondeaux lifted the title in January from Rico Ramos in a dreadful fight, and then was matched with Kennedy, a Philadelphia fringe contender who had gone 0-1-1 in his last two bouts, both against fellow fringe contenders. Kennedy wasn't a threat on paper, and in execution, the fight was a cakewalk for Rigondeaux, as the Cuban toyed with an overmatched Kennedy and landed power shots at will, scoring five knockdowns before referee Russell Mora finally halted the landslide in the fifth round.

It was a rematch nobody asked for, and a step back from where Garcia had gone in July, when he upset Amir Khan and really made a name for himself. Garcia and Morales had met in Texas in February, with Garcia grinding out a decision win over the faded, bloated veteran, and the second meeting failed in just about every way as a legitimate sporting event. Morales repeatedly failed USADA drug tests before the fight, but was allowed to fight anyway by the New York State Athletic Commission, exposing the meaninglessness of these outside drug tests. The show had to go on; Golden Boy wasn't about to lose the third TV main event of 2012 just because someone couldn't pass a real drug test. In the end, Garcia wiped out a tired-looking Morales on a monster left hook in four. Positive spin: What a KO!!!!

Dmitry Pirog is an odd duck. He's a good fighter, but he receives a lot of perhaps unwarranted sympathy given his level of competition since upsetting Danny Jacobs in 2010. He's fought three times, beating Javier Maciel, Gennady Martirosyan, and Nobuhiro Ishida. Ishida was a rather awful choice for a world title fight, given he'd just been routed at 154 pounds by Paul Williams in February. It actually turned out to be a perfectly watchable fight, as the always-game Ishida gave his best effort, but it didn't make it more legit, really. If anything, it made you wonder a bit more about Pirog's credentials as a top middleweight. 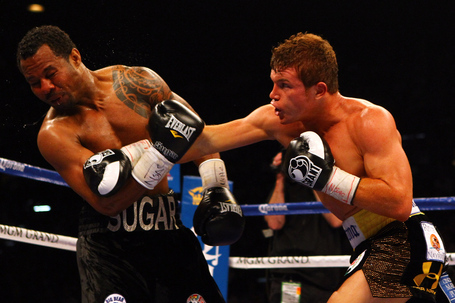 Some would argue that Canelo's farcical matchup with junior welterweight Josesito Lopez in September was even worse, and it's an argument worth making; physically, that was a terrible fight on paper, and proved to be exactly what was expected. But this also proved to be exactly what was expected by everyone who wasn't buying trigger-twitching, 40-year-old Mosley as any sort of viable challenge for Canelo Alvarez, which he was not. After the fight, Mosley retired, which tells me that he knows he's finished. A 2013 "comeback" is unfortunately in the works, and no matter how it turns out, expect Malignaggi-Mosley on this list in about a year.

The argument that the Klitschkos have to fight someone doesn't make their bad fights any better, and this was a lousy fight on paper. Charr, an unbeaten fighter who looked no better than European level coming in, was expected to be manhandled by Vitali, and that's exactly what happened. After doing nothing for the three rounds and change that the fight lasted before it was stopped on a blood-gushing cut, Charr made a big show of how valiant he was by trying to keep the fight going, one of those Kevin Johnson moves where you make a lot of noise from a safe distance when the action is stopped.

When Vyacheslav Uzelkov was scrapped as Nathan Cleverly's undeserving opponent, the promoters got down to the hard work and found someone who deserved a world title shot even less in Shawn Hawk, a 28-year-old former cruiserweight who had been blown out in his last fight by prospect Eleider Alvarez. Hawk gave all the effort you could have reasonably expected, but the difference in class was enormous, and Cleverly put him away in eight rounds. 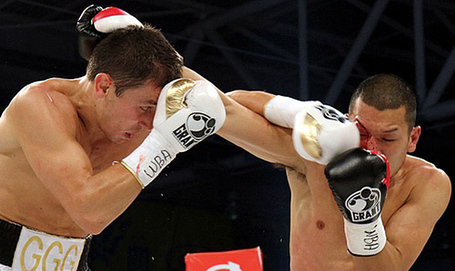 To go back to Dmitry Pirog and give him some credit for a moment, he did intend to fight Gennady Golovkin in September, but had to pull out due to injury. That was unfortunate, as Golovkin-Pirog was exactly what both of those fighters needed for credibility. 11 days after Pirog's mismatch win over Ishida, Golovkin faced an even more unqualified Japanese opponent in Makoto Fuchigami, who had been on a run of wins over mediocre foes. Golovkin mauled him and stopped him in three, then luckily got a chance to debut on HBO with an impressive win over Grzegorz Proksa a few months later.

Karpency was such a lowly challenger that not only did the WBO have to hilariously shoe-horn him into their rankings just to allow this nonsense, but the story leading up to the fight was mostly about his day job, as Karpency is a nurse, which is apparently some kind of uproarious, "can you even believe that's true?" sort of story in dummy boxing circles. Karpency's main claim to fame before this, boxing-wise, was that he'd sparred with Roy Jones Jr, which is sort of like selling a fight between Adrien Broner and David Rodela, who has sparred extensively with Manny Pacquiao. Karpency went the distance, and never won a minute of the fight.

Wladimir comparing Mormeck to Mike Tyson was so absurd that even Mormeck laughed at it, and that was just part of the intelligence-insulting build-up to this titanic mismatch, pitting the 6'6" world heavyweight champion against a 5'11" former cruiserweight whose best days were far behind him, and whose heavyweight career included undistinguished and arguably undeserved wins over Vinny Maddalone, Fres Oquendo, and Timur Ibragimov. After Mormeck landed a whopping three punches in three rounds, Wladimir put him away in the fourth with ease. The fight was embarrassing, quite frankly, and made fools of anyone who bought a ticket to see it happen. 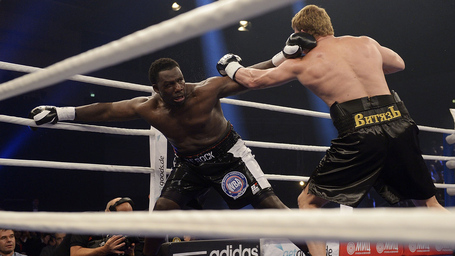 You could put Wladimir-Mormeck here, but to me, this disaster was even worse. It included the WBA repulsively appointing Rahman, who hasn't been a legitimate contender since 2007 or so, as the mandatory challenger to a title belt that was secondary in their own organization. Rahman, about to turn 40, promised he'd be in great shape. He wasn't, as he nearly fell on the ring steps just trying to get into the squared circle. From there, Povetkin demolished him, stopping the shot veteran in two rounds. How the WBA figured Rahman had earned a forced title shot is beyond everyone with any kind of functioning brain, and the performance after the bell was somehow even worse than the extremely low expectations.