Manny Pacquiao and Juan Manuel Marquez will fight for the WBO's new, hopefully one-time-only "Champion of the Decade" title on December 8.

Share All sharing options for: Pacquiao vs Marquez IV: WBO 'Champion of the Decade' belt unveiled

Manny Pacquiao and Juan Manuel Marquez won't be fighting for any title belts when they meet for a fourth time this Saturday night on HBO pay-per-view. Given that this is boxing, it's truly inexcusable for anyone to ever have a fight scheduled for over eight rounds without some kind of trinket on the line, so the WBO stepped up and created a thing they're calling the "Champion of the Decade" belt, which first made the rounds in late October. 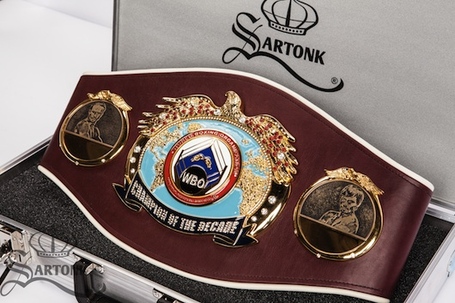 So there it is. It's a pretty standard WBO belt with some more jewels and stuff, and I admit that despite my MORAL OBJECTIONS! to fighters paying their money for the right to fight for this belt, the Pacquiao and Marquez plates are pretty sweet, and it's a nice belt.

From the press release:

"Every crevice of this belt has been carefully finished, and the results, I think, speak for themselves," Edward S. Majian, President of SARTONK, stated, before reflecting: "Some purists criticize belts. But ours is the perspective of the craftsman. Our work aspires towards perfection, and we put every ounce of ourselves into that aspiration. What you see in this belt is devotion to boxing. And don't the fighters deserve that? When the moments are long-gone, this belt will immortalize the time these men met to put themselves on the line and gave their fans one more epic bout."