In the main event, Nonito Donaire (30-1, 19 KO) makes his fourth appearance on HBO this year, facing his fourth top ten opponent, defending his super bantamweight championship against the great Mexican warrior, Jorge Arce (61-6-2, 46 KO). Donaire vs Arce has been on promoter Bob Arum's wish list for a couple of years now, and finally the old man gets his fight, as after a series of failed negotiations, everything has fallen into place.

In the co-feature, in another super bantamweight title fight, Guillermo Rigondeaux (11-0, 8 KO) faces Thailand's Poonsawat Kratingdaenggym (48-2, 33 KO) for Rigondeaux's WBA title. Poonsawat was the man who lifted the belt from popular Irish fighter Bernard Dunne back in 2009, and made a few defenses before dropping the belt to Ryol Li Lee in October 2010. He can fight, but his recent win streak (seven fights and counting) hasn't exactly come against world-level opponents.

If Donaire and Rigondeaux both win in impressive fashion, expect the talk of those two squaring off to intensify.

Here's the poster for the event: 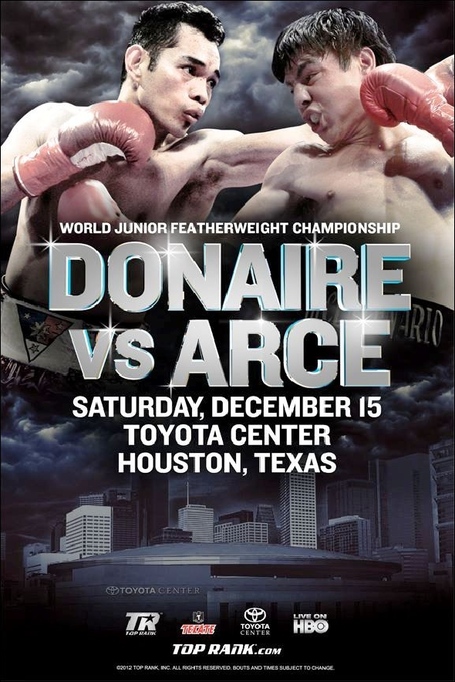