Lucas Matthysse RTD-5 Angel Martinez: In what was a final tune-up bout before he gets his career back on track, Matthysse (30-2, 28 KO) made easy work of 20-year-old Martinez (13-2-1, 9 KO), who did not come out for the sixth round after taking a pretty heavy beating. Matthysse now moves on to face Humberto Soto on May 19, the HBO co-feature to the Lamont Peterson vs Amir Khan rematch.

Johnriel Casimero TKO-10 Luis Lazarte: We already went over this disgrace with some video clips of the riot insanity after the fight, as a full-scale riot broke out with a gaggle of idiot fans fighting the victorious Filipino side and throwing various objects, including chairs, at Casimero and his team. Lazarte (49-11-2, 18 KO) bit Casimero (16-2, 10 KO) during the fight, and Casimero came back to stop him with a big shot at the end of the ninth that had Lazarte on unsteady legs into the tenth round. Lazarte at one point also reported threatened New York referee Eddie Claudio, who was flown in by the IBF as this was an interim title fight. Lazarte has been firmly planted in the IBF title scene at 108 pounds for a while now, but hopefully this was the end of that. He's a miserable "boxer," a goon, and the dirtiest high-level fighter in the entire sport. He deserves no title consideration anymore. He's a legitimate villain. I'm not saying Casimero is some saint, because he's been a dirty fighter, too, but this is above and beyond. Lazarte can't have a single fight, it seems, that isn't a debacle of some kind. 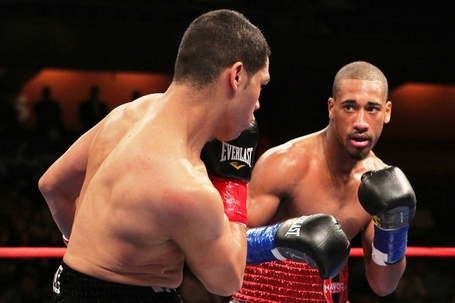 Demetrius Andrade KO-2 Angel Hernandez: I'm sure people will basically try to gloss over it with, "See? He didn't die!" like that's some big feather in this fight's cap, but this got pretty gross. Hernandez (30-11, 17 KO) really should not have been in the ring. He was rocked around by Andrade (16-0, 11 KO) pretty good, and though the 36-year-old Hernandez came to fight, that's just his style. I've seen him numerous times over the years, and I can say that this wasn't the same guy it used to be, and it's not just because he's 36 years old. And if you don't want to take my word for it, since I'm just some guy, then ask Ishe Smith. For the record, I don't blame Demetrius Andrade for this at all -- he didn't book this fight, and I don't know that Joe DeGuardia or Star Boxing were aware that there were problems with Hernandez, and by all accounts, they ran the tests and for boxing, that's all that counts. They run their tests, which Dr. Margaret Goodman explains in Gabe Montoya's great piece from yesterday is not enough in boxing using Shane Mosley as an example. Hernandez moaned when knocked out, and referee Steve Smoger jumped in immediately, in a situation where usually the fighter would at least be given a count. He was on alert. Doctors rushed in, too -- also apparently on alert. This fight had bad vibes all over it. Hopefully Andrade steps the competition up again, because that win over Grady Brewer isn't going to be enough for any longer. 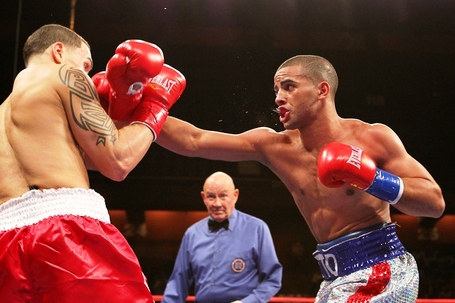 Raymond Serrano UD-10 Kenny Abril: Frustrating fight to watch, duller than dishwhater. Full recap is here, but I'll quickly say that Serrano (18-0, 8 KO) isn't a prospect I'm putting a lot of stock into. At all. When Abril threw, he was 50-50 with Serrano.

Friday Night Fights is batting .500 so far this season, I'd say. This show stunk, as did the season premiere (Kennedy vs Martin), but the two middle shows (Provodnikov plus Kim-Amidu and last week's Chilemba-Miranda) were both pretty solid. We've certainly seen worse from the ESPN matchmakers, and the coming schedule looks like a mixed bag. Plenty of time to get this season on a roll, though.

Kevin Mitchell UD-10 Felix Lora: Mitchell (33-1, 24 KO) carried this thing for ten rounds as planned, reminding me a lot of that absurd Victor Ortiz vs Hector Alatorre fight from that one Fight Night Club, which is one of my least favorite fights I've ever sat through.

A full report for Mitchell vs Lora and the undercard can be read here.