Alvarez vs Mosley: Breaking Down the Inevitable, Dreaming About the Improbable

Share All sharing options for: Alvarez vs Mosley: Breaking Down the Inevitable, Dreaming About the Improbable

For months now, I've been dreading the official announcement of a Canelo Alvarez vs Shane Mosley fight. That came last night, when Oscar De La Hoya made the fight a reality via his Twitter account.

Boxing fans were supposed to jump for joy. Some did -- I'm not ignoring that there are so-called "casual fans" who like this fight, but I believe they're wrong. I don't mean that to sound smug, even though I know that it does. I just cannot look at this fight and like it.

Except for those moments where I read quotes from Shane Mosley, the 40-year-old veteran who is more sitting at the bottom of the other side of the hill than he is simply over the top of it. In those brief moments, I remember the Shane Mosley I became a fan of so many years ago, and I remember how devastating he could be. How damn good (at times, truly great) he really was. And how I always just plain liked Shane Mosley along with liking his fights and admiring his talent.

Here's what he told ESPN.com about the fight:

"This is more of a fight to prove myself. I know I didn't look good in my last couple of fights and I really to make a statement in this fight," Mosley told ESPN.com on Friday night. "I just want to get in the ring, fight a world champion and win another belt.

"I'm very excited and happy. It's another chance for me to show that I still belong. He's a young guy and it's a tough fight, but I'm excited to get the fight. A lot of guys want to be in the position I am in to have this type of fight."

For a moment, "Gonna Fly Now" enters my mind and I see Mosley busting his ass at Big Bear with the esteemed Naazim Richardson, getting himself ready for this fight. Most of the informed feel he has little to no chance, but he doesn't see it that way. This is the final shot.

Then, I rejoin the real world.

In the real world, Shane Mosley is a fighter whose slurred, dulled, nasal-y speech has worried fight fans and observers familiar with his entire career. He speaks differently than he used to, and that's a fact. People point this out because it's a concern, because as brutal as the boxing reality that fighters get hurt really is, nobody wants to see it, and nobody wants to feel like they're seeing it happen and get worse.

He's a fighter who in his last five fights has had one good performance, against an Antonio Margarito who had just been through quite an ordeal in his locker room before the fight. A few months before that fight, Mosley struggled with an extremely limited Ricardo Mayorga, leading promoter Lou DiBella, an independent party with no interest in the fight, to say that if Mosley fought Margarito, they'd take him out "in a pine box."

That's how iffy Mosley looked against Mayorga, and also how monstrous Margarito was thought to be at the time. Of course, Mosley thrashed Margarito, who has never once looked good in the ring again.

And by the way: Mosley vs Margarito was over three years ago. That's the last time Shane Mosley won a fight.

For those thinking that a once-great fighter has another big night in him, chances are that was the final big night for Shane Mosley. When he decimated Margarito, he shocked the boxing world. When he fought Floyd Mayweather Jr, Sergio Mora, and Manny Pacquiao, he was a shell of the man he was that night in Los Angeles.

There are long answers, and we'll go semi-long with a couple, but the short answer is: Nothing, really.

Mosley was 37 years old the night he wiped the canvas with Margarito and beat him into submission and into Javier Capetillo's trembling arms.

There is a misconception, it seems, that fighters are hanging around as top talents longer than they used to, and maybe they are, but not to an enormous degree. There's only one Bernard Hopkins out there really pushing the envelope to unseen lengths, and the continued relevance of someone like Antonio Tarver probably has more to do with an overall dilution of the talent pool, and really, who has Tarver beaten in recent years? Another old guy, Danny Green. Vitali Klitschko is now in his 40s, but he's working against what may be the worst crop of heavyweight contenders in history.

I'm not saying that my rankings are perfect, but they're not terribly far off from most independent rankings, so we'll go with those. Here's a quick breakdown, by division:

One note: At 108, I subbed out the 40-year-old Luis Lazarte for Johnriel Casimero, as Casmero beat Lazarte last night and will be taking his place in the rankings. That effectively subs out the oldest man for the youngest, but takes last night's events into account.

Shane Mosley is, by far, the smallest of the really old (40+) ranked fighters, and would be even if you moved him up to 154, which may be only two divisions below 168 (where Glen Johnson hangs on by a thread), but is a world of difference in reality.

Some of these older guys are here by default almost -- only Klitschko and Hopkins are really near the tops of their divisions. Tarver, Johnson, Mosley are there as placeholders, more because there aren't more established fighters in those weight classes. 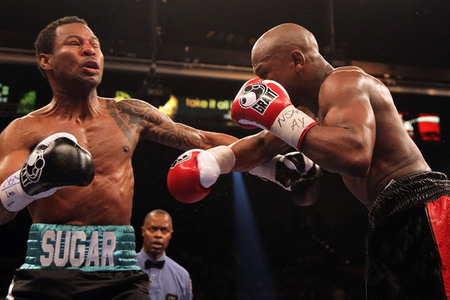 Let's also not forget that Mosley has not had some dainty career. His entire career, he has been a physical fighter. This is a lot more important in analyzing Mosley's fall from grace than just saying, "He's been in a lot of wars and they have taken a toll on him." That is very, very true, and very important, but when you watch Mosley's last three fights, what do you see?

A fighter who doesn't fight the way he used to. Mosley always had a knack for getting cracked, taking it, and coming back just as hard. That is not Shane Mosley anymore. The last moment of his career he looked good, he whacked Floyd Mayweather right in the mush and nearly had him down. Then the next 10 rounds of that fight, with Mayweather punishing Mosley, something happened that had never happened before.

Shane Mosley turned into a guy who no longer liked contact. He annoyed Mayweather with his attempts to play nice all the time, with the "bro hugs" and the apologies for this or that. We'd see this again later, when Mayweather socked Victor Ortiz two times in the face and put him out last September. Mosley didn't take it as far as Ortiz, since he didn't moronically headbutt Floyd, but there was a moment where Mayweather clearly seemed to say to Mosley, "Stop trying to touch gloves with me. This is a fight."

Mosley and Mora were a disaster, and it amounted to a brutally ugly fight. Mora is no work of art in the ring in the first place, but Mosley, getting too old, couldn't find him or catch up to him. He couldn't land meaningful shots. Mora played keepaway, and Shane Mosley, who once would have been good enough to stop that game, was no longer able to force the action as he once might have.

The Pacquiao debacle, jeered as soon as it was signed (so easy to forget), saw Mosley again wanting to play nice. Glove tapping and bro hugs and buddy-buddy body language. Mosley ran from contact eventually, after Pacquiao dropped and hurt him early in the fight. He survived. Shane Mosley has never, ever been a fighter who fought just to survive.

Against Mayweather, Mora, and Pacquiao, fighters of three very different styles and approaches, Shane Mosley couldn't prove that he wasn't an old man in a young man's game (or at least a younger man's game). And he fought nothing like the Shane Mosley we keep in our memories. 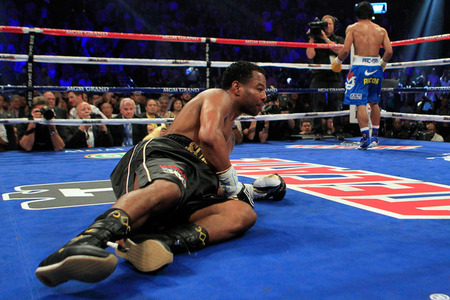 We are supposed to buy that somehow, Shane Mosley has rejuvenated himself in the last year, and is now some type of threat to Canelo Alvarez, a powerful, 21-year-old fighter just now starting to come into his own.

Cintron's decline into irrelevance was a shorter fall, because he never reached Mosley's heights, but like Mosley, Cintron had looked dreadful in recent fights, and really didn't deserve the shot ahead of so many more deserving candidates. Shane even helped prepare Cintron for that fight, and the two reportedly had wars in sparring. I questioned then whether it was a good thing to let it be known that Mosley was "warring" with Cintron.

He was getting well past his prime against Mayorga. The Margarito fight was a blip on the radar, a big anomaly in the middle of a very steady, very normal, very natural decline of a once-great fighter.

They can say that Canelo Alvarez will be facing Shane Mosley on May 5, but he won't be. He's going to be facing a ragged, deteriorated Shane Mosley whose sugar isn't so sweet anymore, who fights because like many before him, he doesn't know that he should stop, or because he simply can't stop.

None of this is really about Canelo Alvarez at all. If we're being really honest, nothing he can do on May 5 is going to be all that impressive. Even if he knocks Shane Mosley out, so what? If you compare it and say he did something Mayweather and Pacquiao couldn't do, it's just as easily said that Mosley's even older now, rusty, and fighting at a weight (154) where he's never been near his best in the past. If he becomes the first Mexican fighter to beat Shane Mosley -- which they've hinted at hyping and will undoubtedly go big on in the coming months -- then big deal. There are several Mexican fighters who could beat Shane Mosley right now.

The only important development that can happen on May 5 is Shane Mosley winning, which is incredibly unlikely, or giving Alvarez more problems than he has any business giving him anymore, which will tell us something about Canelo Alvarez, but probably not about Shane Mosley.

If Alvarez even struggles against Mosley, consider it an upset. If Mosley wins, or even makes a case for himself, consider it one of the greatest "old man" stories in boxing history.

Hopefully he'll be played off triumphantly (think Conti's "The Final Bell") and not as a feeble image, a haunting and ultimately depressing reminder of what used to be. I'm unfortunately certain which will be the final song of this movie, though.