Here's the poster for the February 25 HBO doubleheader featuring the welterweight main event between Devon Alexander and Marcos Maidana, live from (where else?) St. Louis. 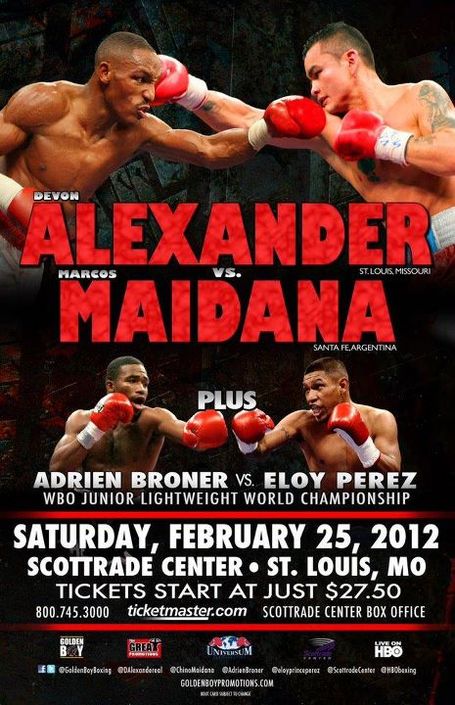 Alexander (22-1, 13 KO) and Maidana (31-2, 28 KO) are both moving up from 140 pounds for this fight, hoping to get into the mix at 147. This will be Alexander's first fight under the Golden Boy banner, since leaving Don King last September.

Is it just me or is this fight totally lacking zest on paper, at least for a well-matched HBO main event? This fight is two weeks away and nobody is talking about it at all. Maidana is a boxing fan's type of fighter, but Alexander's stock has really, really dropped over his last three fights. First there was the highly debatable decision win (in St. Louis) over Andriy Kotelnik, then the flop against Timothy Bradley, and then last year, another hometown decision against Lucas Matthysse.

If you're wondering why Maidana is going to St. Louis, it's very simple: The only place in the States this fight will draw as a main event is St. Louis. Maidana will be gunning for the knockout and doesn't come to win decisions anyway, so I have my doubts that he's all that concerned with the officiating.

The co-feature between Adrien Broner and Eloy Perez for Broner's 130-pound paper belt is actually the more interesting fight, in my opinion. Broner, 22, has gotten a lot of hype in the last year, but he wasn't so great against Daniel Ponce De Leon, and his next two fights were against mediocre, very safe opponents. Perez (23-0-2, 7 KO) isn't held in the same regard as a potential star that Broner is, but he's a good fighter and I keep having the nagging feeling that Broner is more sizzle than steak. I'm interested to find out what he'll do with Perez, who is better than Jason Litzau or Martin Rodriguez.