Here's the official poster for the March 24 card in Brooklyn, with a main event of Zab Judah vs Vernon Paris. The show is being promoted around Judah's return to his hometown, as it should be. 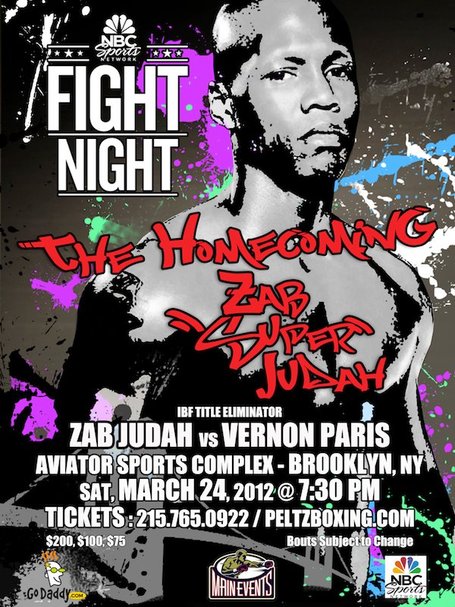 I think it's fun! It's different at least. Thanks to Boricua Boxing for the poster.

The card, which will be aired on the NBC Sports network, features the very good Judah vs Paris main event, which is a terrific crossroads fight between a guy who's running out of chances (Judah) and a guy who's good enough to take advantage of his first big chance (Paris), and will tell us a lot about both fighters.

The undercard was also set up yesterday, as Tomasz Adamek will be back in action on the card against an opponent yet to be named, and there will be another heavyweight bout between Siarhei Liakhovich and Bryant Jennings, which is another good crossroads fight.

I always have my doubts about what promoters can do with these shows when they actually get them, but so far, Main Events and Russell Peltz are doing what they can to deliver quality. Keep in mind this show has been put together on a $100,000 budget -- or 1/10th the purse Timothy Bradley made to fight Joel Casamayor in November.