Mike Dallas Jr and Miguel Gonzalez were on-point for their 10-round junior welterweight main event on tomorrow's ESPN Friday Night Fights. Dallas weighed in at 140, with Gonzalez at 139.

For Dallas (17-2-1, 7 KO), this is a chance to get his career back on track after a pair of losses on the program last year. He dropped a seventh round KO to Josesito Lopez in January, followed by a debatable decision loss to Mauricio Herrera in June. He's been out of the ring since then, sharpening his skills with new trainer Virgil Hunter.

Gonzalez (20-2, 15 KO) has run up his record in the soft rings of Ohio and Michigan. This is a big opportunity for him to make a real impression against a solid opponent.

In the co-feature, super middleweight Shawn Estrada is making his return to the ring at 196 pounds, and he looked it on the scales, as you can see below. 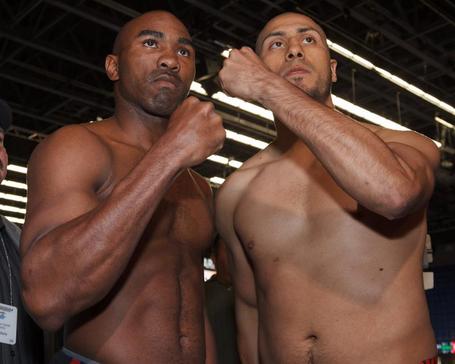 Estrada (13-0, 12 KO) is a former Olympian with a start-and-stop pro career since late 2008, and just has not been able to get any momentum. His opponent, Terrance Woods (9-3, 6 KO), isn't any sort of step forward from past opponents, and weighed in at 177 pounds, which will give Estrada a huge weight advantage tomorrow, but given it doesn't look like good weight, I'm not really sure how big an advantage it's going to be.