Chris Arreola has smacked down any worry that he's out of shape heading into his fight against Eric Molina tomorrow, as the 30-year-old heavyweight contender came in at a pretty fit-looking 245 pounds. Molina weighed in at 228 pounds.

Arreola (34-2, 29 KO) is riding a six-fight win streak that dates back to August 2010, and in that time has dropped his normal fighting weight from anywhere between 255 and 265 down to 240-245. In five fights last year, he got his weight under control and stayed busy, but he hasn't fought since a November 6 smashing of Raphael Butler in Mexico. 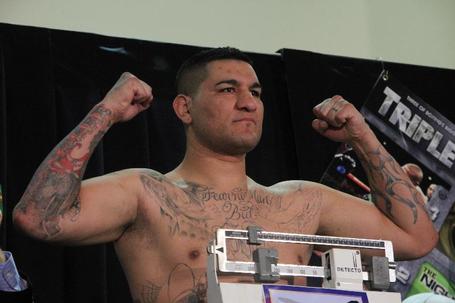 Though the 245 is actually his heaviest weight since he fought Joey Abell last January, he looks in overall better condition than he did for a few of those fights last year -- a bit more toned, a bit more like he's filled out to a good fighting weight. 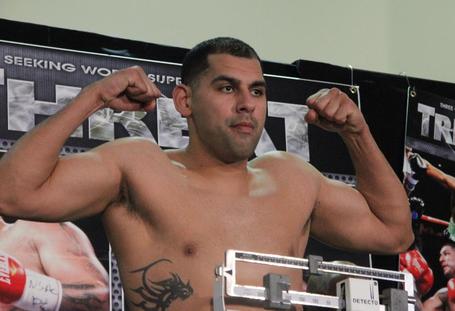 Molina (18-1, 14 KO) is a decent opponent for this fight. The 29-year-old Texan has not beaten anyone you'd consider good, but this is a chance for him to break through. He can punch a little bit, but is obviously the major underdog, and is expected by no one to win tomorrow night.

Arreola vs Molina will air on the Showtime Extreme portion of tomorrow's Showtime broadcast, starting at 8 p.m. EST. Bad Left Hook will have live round-by-round coverage of the entire show. 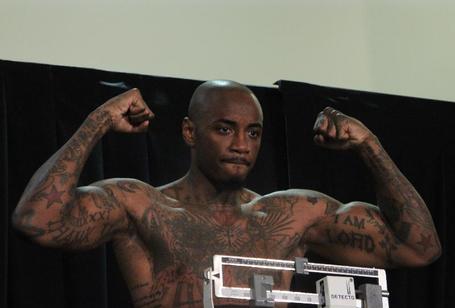 Alfonso Lopez (22-2, 17 KO) returns home to Texas and gets one hell of an easy fight on paper after his stink-out-the-joint performance on the Friday Night Fights season premiere in January. He'll face Justin Williams (3-5-1, 2 KO) in an absurd mismatch. Lopez weighed 165¼, with Williams at 161. I guess this is Lopez's reward for putting on an early contender for Worst Fight of the Year.