A pair of hungry, hard-fighting super middleweight prospects will get a chance to show what they can do on March 17, live on HBO, as Edwin "La Bomba" Rodriguez and Don "Da Bomb" George square off in a 10-round clash that promises some good action.

Rodriguez (20-0, 14 KO) is coming off of a debated win over Will Rosinsky in October on ShoBox. Rodriguez, 26, won on shutout scores of 100-90 across the board in what was in reality a highly competitive fight where Rosinsky did more than was likely expected of him by the matchmakers.

But his team is confident that George, who like Rodriguez is more brawler than boxer and doesn't mind a slugfest, presents a good matchup.

"Edwin knows how to win. He's always won and he will continue to win," said manager Larry Army. "We do think this is a great fight for us stylistically, very similar to the Will Rosinsky fight that we just had. In a lot of ways, they both have power, they are both limited.

"Edwin's had a very good four years, he hasn't had any big layoffs. I noticed on Donovan's record that he's had some big layoffs in terms of the way he's been brought up. I think that, in terms of opponents, we've fought better opponents over the last year and half, guys like Aaron Pryor Jr. and James McGirt Jr., Will Rosinsky, who won a national amateur championship.

"Edwin's pedigree, I think, is going to be too strong for Donovan on that night. Quite frankly, when it comes to the trainer, we have the advantage in that camp as well with Ronnie Shields, who's trained guys like Mike Tyson, Evander Holyfield and Pernell Whitaker. I feel like we've assembled the perfect team for this fight and I feel that this is the perfect opponent. We wouldn't have taken the fight if we didn't think we could win it."

Shields was hired last year to help Rodriguez get back to a boxing approach, as he had turned into a bit of a defense-third slugger in recent fights.

"Donovan George is a very skilled fighter. We take no one lightly so we're here training," said Shields. "We're looking forward to this fight. This is what we do.

"I think that both guys will be competitive. The best man is going to win on March 17 and I think that's all that matters. The other team is very confident, we're very confident. This is the game. This is the way it's supposed to be. They're supposed to feel like their guy is better just like we feel Edwin is better. I'm here in Houston to get Edwin into the best condition possible and to put together the best possible game plan."

Shields also says that he feels Rodriguez vs George will be better than the night's main event between world middleweight champion Sergio Martinez and Matthew Macklin.

George (22-1-1, 19 KO) has shown in past TV appearances that he's a powerful, but vulnerably fighter who makes for exciting fights. His manager, Mike Michaels, is confident of victory.

While the managers duked it out a bit on the conference call -- Army felt that it was disrespectful of Michaels to say they were going to win, Michaels disagreed -- the fighters were pretty reserved, and showed a lot of respect for the other man. 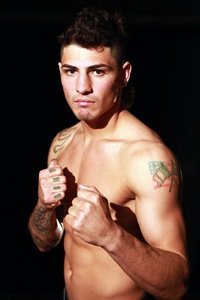 "I've seen a lot of tape on him. I've seen him coming up. He's a great fighter, he comes to fight. He's a big super middleweight. I know he's going to be in tiptop shape and I think it's going to be an excellent war," said Chicago's George.

"Obviously, I think I am going to come out on top. I don't care if I win by split decision, majority decision, knockout, whatever, I just want to win. I am going to lay it all out on the line for this fight. This is my big opportunity. I think you only get one in life and this is it for me. I'm sure we both want the same thing. We're both trying to be world champions, to become an HBO fighter and make millions of dollars and take care of our families. At the end of the day, may the best man win. I just hope we have a great fight, nobody gets seriously hurt and we can continue with our careers.

"This is a dream come true for any boxer and I'm training extremely hard for Donovan George," said Rodriguez, of Worcester, Mass. "He's a very good fighter. He's one of those fighters that doesn't know how to take a step back so I am not taking lightly at all. So I'm bringing 100 percent, my best game."

George isn't shy about discussing his lone career loss, a savage thrashing at the hands of Francisco Sierra in July 2010, which was live on ESPN Friday Night Fights. He also makes no excuses, saying he blames himself for being overconfident.

"I have that one loss on my record and it wasn't just a loss," said George. "I got beat up bad, it was a horrific beating and everyone saw it. It was on national television and it was embarrassing, but I bounced back and beat a pretty good fighter (Cornelius White). I just want to go out there and prove myself and fight fights like this on the biggest stage in the world. It's just a great opportunity to show the world what I'm made of and I know it's going to be a great fight."

Past the mutual respect, Rodriguez did show his hand just a little bit in terms of what he expects of George.

"We know who has the better chin. I've never been down before," said Rodriguez.

You can expect the action the two fighters are promising on March 17.