Manny Pacquiao and Timothy Bradley kicked off their press tour today in Beverly Hills, Calif., and we've got the full video. The two meet on June 9, live at the MGM Grand in Las Vegas, on HBO pay-per-view.

"On June 9th, at the MGM Grand, we're gonna see I think a boxing a classic. Manny Pacquiao, the Congressman from the Philippines, will defend his welterweight title against the junior welterweight champion, Timothy Bradley. I don't have to oversell this fight. You have seen both fighters. You know how good each of them are. And you know that each of them come to fight. This will be a non-stop, fan-friendly, exciting fight."

"Manny Pacquiao is a worldwide superstar who we all know has overcome every hurdle placed in front of him. His contributions to the sport of boxing go far beyond the ring and transcend even the sports world. He's a spokesman for his people, his country, and defines determination in all languages.

"Tim Bradley, while not the global icon of his opponent, represents the same values, ideals, and determination in his own right. He, too, has overcome obstacles. He has fought hard for his place in this sport, for his place on the pound-for-pound list, and we have no doubt that this fight will be an all-out brawl of determination and strength."

"I know that a lot of people, a lot of fans, don't think Tim should be in this position, but you know what? You gotta really know Tim Bradley to judge him. He's a great person, in and out of the ring, he's one of the hardest-working fighters I've ever met, and I know that June 9 is gonna be a great fight.

"I respect every opponent, every team ... that we face. I give them their respect. But one thing i'm gonna tell you: That night, we come to fight. Not to make friends. We're gonna be there that night to defeat Manny Pacquiao. I train my fighter, not to show up -- we're not gonna go to that event just to show up and look good and put on a performance. We're gonna be there that night ready to win the fight. I'm gonna prepare Tim Bradley, along with my team, to go to war, and take that throne from Manny Pacquiao. With all respect, we're gonna be victorious that night."

"I promise them that Manny Pacquiao grew up in a war-torn place. He's used to war. In fact, he was just telling some friends, two nights ago -- was it last night or the other night? How he saw as a young boy, some people being killed in war. So you want war? You've got Manny Pacquiao."

So let's not have him talk anymore, maybe.

"It's nice to be fighting a fighter who's undefeated and not worried about losing that zero on his record and is willing to challenge us. This is gonna be a really good fight. Timothy's a very, very tough opponent. I've watched him fight many times, he's very aggressive, he's very strong, and we're gonna have to be at our best to beat him. We're gonna train our asses off and get ready for this one." 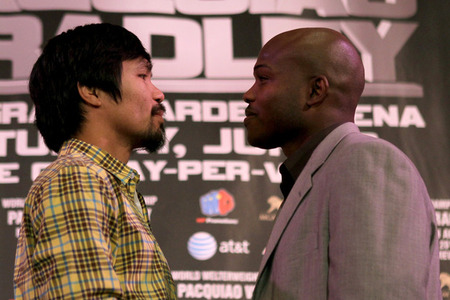 "This is something I've dreamed of my whole life. 18 years of my career, since I was an amateur, to be in the position in a supermegafight against the best pound-for-pound fighter in the game, probably the best fighter in the history of boxing, by some peoples standpoint. I'm ready for this challenge. I know it's gonna be hell in the ring with Manny Pacquiao.

"I don't have to say anything negative or bad about him, he's a great person. He's a great role model for the kids. I really like Manny Pacquiao a great deal, in and outside of the ring. I think that June 9th is my time. Manny Pacquiao has reigned for a very long time. I feel that I'm the new face of boxing. I feel that it's gonna be one heck of a challenge, but I'm up for it, and I feel that I'm capable of winning this fight."

"Please watch the upcoming fight on June 9. It's gonna be a good fight, because Timothy Bradley is strong and he loves to fight toe-to-toe. He's undefeated, and I think it's gonna be a lot of boxing in the ring. So what we're going to do is train hard. We're going to do at least ten weeks of training for this fight. And I hope Timothy Bradley will train hard for this fight so we can give a fight and entertain people."