Share All sharing options for: Martinez vs Macklin: Fight Poster and Undercard Lineup

Sergio Martinez faces Matthew Macklin on March 17 at The Theater at Madison Square Garden in New York, live on HBO. Here's the fight poster, and after the jump, some news on the full undercard lineup, including the televised super middleweight co-feature pitting Edwin Rodriguez against Don George. 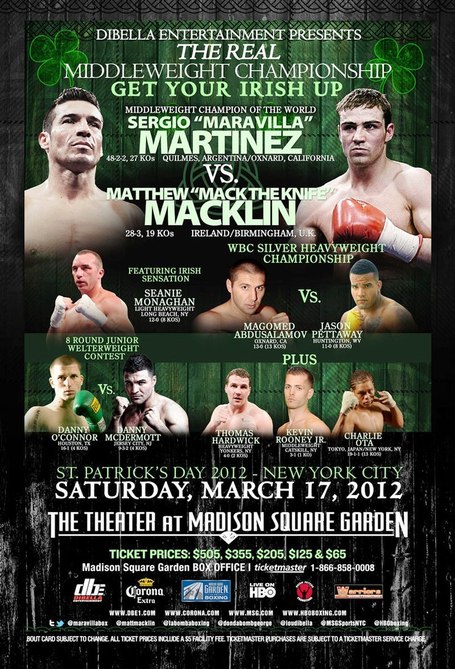 You might have recently seen Abdusalamov, 30, on Friday Night Fights in a comical bout against a pot-bellied Cuban named Pedro Rodriguez. The Russian southpaw, now based in Oxnard, Calif., is a former Russian amateur champion but not an international amateur star, so his status as a prospect (especially given his age) is a bit in question right now. Pettaway is a club fighter from West Virginia and despite his record, unlikely to be a challenge.

Current OPBF and Japanese junior middleweight champ Charlie Ota will be fighting for the first time in the United States, in his home city of New York. No opponent has been named.

Argenis Mendez (19-2, 10 KO), a solid super featherweight contender, will also be in action.

Also on the show will be a bunch of Irish guys, notably junior welterweight Danny McDermott (the DiBella release does not have him facing Danny O'Connor as the poster suggests), light heavyweight Seanie Monaghan facing Eric Watkins (billed as his "stiffest test to date" which isn't saying much), heavyweight Thomas Hardwick, and publicist-fighter (in that order) Kevin Rooney Jr.

If you've never seen Monaghan and want to take a look at him, we have full fight video of his bout from the Cotto vs Margarito undercard in December.