Hopkins vs Dawson II: Final Ride For 47-Year-Old Champ, Or Just One More Myth to Bust?

Share All sharing options for: Hopkins vs Dawson II: Final Ride For 47-Year-Old Champ, Or Just One More Myth to Bust?

Chad Dawson is extremely confident ahead of his April 28 rematch with Bernard Hopkins -- enough so that after spending two rounds in the ring with Hopkins in an aborted fight last October, the 29-year-old challenger is predicting a knockout when the two meet again.

"Yeah, if it happens that Bernard comes to fight, then it's going to be Chad Dawson, sixth-round knockout. That's how confident I am after the two rounds that we had. After the two rounds that I've been in the ring with this man, that's how confident I am. He poses no threat. It's my being young, strong and showing everybody that I can take a punch.

"I'm not saying that Bernard isn't a big puncher or anything, but I'm willing to take something from him just to get in that one knockout blow. It's going to be everything.

"People just don't understand. Only I know what's going to be going on in that ring against Bernard. He doesn't want to fight me."

Dawson (30-1, 17 KO) was originally and falsely ruled a TKO-2 winner over Hopkins (52-5-2, 32 KO) last year, but that was overruled in December by the California commission, and given that it was an injury suffered due to something other than the normal process of boxing, it's hard to argue with their ruling. 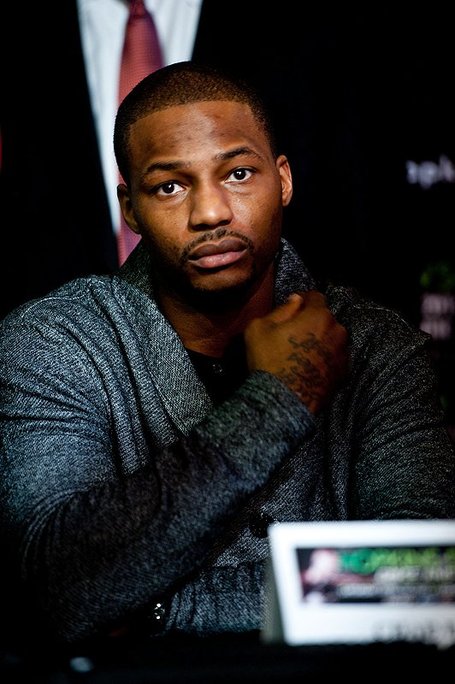 But Dawson's main point, that Hopkins doesn't want to fight him and "can't do anything" with him, is not held only by Dawson. This is not normal trash talk; there is a legitimate belief in Dawson, his team, his promoter Gary Shaw, and many fans, that Bernard Hopkins really would prefer to not be fighting Chad Dawson, but he's honoring his WBC mandatory and doing it anyway.

Last time out we didn't get much of anything. This time, Hopkins has had another birthday, making him 47 years old, and I'm not sure many are picking him to win again.

It's not because he's not still good, or even because he's gotten too old. It's a style issue. Dawson, a crafty lefty with power when he sits down on his punches, and a very smart boxer, is a horrible style matchup for Hopkins at this stage of his career.

There also seems to be some legitimate change in Dawson's demeanor when it comes to this fight. He's been too long known as an almost unfortunately laid-back fighter, who didn't have a lot of fire and boxed mostly because he's very good at it, rather than because he loved the game or whatever.

Though Dawson has power, as mentioned a moment ago, there has been the belief and even once the admission that Dawson doesn't always commit to his punches, that he's not got the mean streak that makes a true knockout puncher. He's no knockout artist by any means, but Dawson has been criticized for relying on his skills and not trying to finish fights, and not even really giving, I guess you could say, a fully honest effort. He has coasted in many fights, and been able to because he's that talented.

But he seems to have taken a personal stance here. I don't think he likes Bernard Hopkins much, to be honest, and I think he feels clearly that Hopkins legitimately ducked and avoided him for years. I'm not sure Dawson or Shaw thought even one fight would happen, and Shaw said a little while back that he thought Hopkins would duck the rematch, too.

Dawson has been praised and criticized plenty in his pro career. In Bernard Hopkins, I think he sees a sitting duck, an old champion, greatly respected the world over, and a guy he can beat convincingly. If Dawson were to stop Bernard Hopkins, he'd be the first man to ever do so, and we're talking about a guy who's been in the pro rings for nearly a quarter-century at this point. 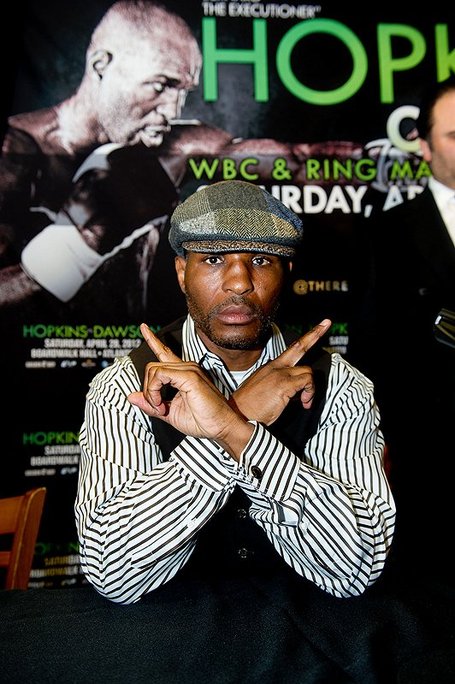 Then you have Hopkins himself. Dawson thinks Hopkins is -- well, maybe not truly afraid, but certainly not happy to be back on the stage with the same guy from last October, and they're even going so far as to say he'll quit again, as they believe he did the first time around.

From the Hartford Courant:

"Everybody here knows why he didn't do the faceoff," said Dawson's attorney, Walter Kane. "He was not hurt [in their first title bout in October]. You all know that. He [wimped] out. He's going to do it again. Don't let him."

He didn't want to fight then, they argue, and he certainly doesn't want to fight now. Shaw believes Hopkins is taking the fight because without his WBC belt or his legitimate world championship, both of which must be defended against Dawson to have their full worth, Hopkins would simply be "an old fighter" these days, instead of a guy who commands attention and still sits, for some, up there in the pound-for-pound top ten.

Hopkins, for his part, just isn't saying a whole lot. But if there's one thing any of us should have learned by now from the career of Bernard Hopkins, it's that you doubt him at your own peril.

He was supposed to be too old for Felix "Tito" Trinidad in 2001. He smashed him, dominated the fight and stopped the popular Puerto Rican in the 12th round. After losing a pair of controversial decisions to Jermain Taylor in 2005, he figured to be finished, finally knocked from his middleweight perch.

Instead, he went crazy and moved up to light heavyweight, where he completely wiped the mat with world champion Antonio Tarver in June 2006. He figured to be too old for Kelly Pavlik in 2008, six months after a debatable loss against Joe Calzaghe -- he kicked Pavlik's ass all over the ring when they met.

And then last May, he convincingly downed Jean Pascal, five months after a draw most felt he should have won, and again claimed the world's light heavyweight championship at the age of 46.

Chad Dawson is a bad matchup, but Bernard Hopkins is a living legend who feeds on the doubt that others have in his ability to do it yet again. Something may be stirring in Hopkins, propelling him to yet again silence the critics and leave them dumbfounded at home and at ringside.

But this could also just be it for a man who, when you strip away the name value, is 47 years old, with a career living on borrowed time.