I promise I'll start pumping these out weekly again, probably on Wednesday mornings (EST). I know they're helpful and useful and appreciated and stuff.

ESPN2 / ESPN3.com, Juan Carlos Burgos vs Cristobal Cruz, Edgar Santana vs Manuel Perez. Hopefully a better Friday Night Fights than we've been largely treated to so far this year ("treated" being a cute way to describe the lousy results thus far), and I've got my hopes up just a tiny little hair, mostly because I'm a big fan of Burgos (28-1, 19 KO). I'm not usually smug about being right, since I'm so often so miserably, ridiculously wrong, but I found it almost hilarious that so many thought Luis Cruz was going to beat Burgos, and treated it as an afterthought, on the Pacquiao vs Marquez card. I wondered, "Have they seen Burgos?" And then I wondered, far more importantly, "Have they seen Cruz?" That Burgos clearly won the fight not only delighted me, because I like him as a fighter, but made me feel a tinge of superiority toward all those bizarre Luis Cruz supporters. What the hell had Luis Cruz ever done to deserve such confidence? Struggle with Martin Honorio? I'm not even talking about Puerto Rican boxing fans here, either; their support I understand. I still don't get it. I probably never will. Bad Left Hook will have live, round-by-round coverage.

TV Azteca (Mexico), 9:30 p.m. EST, Aaron Herrera vs Joksan Hernandez, Alejandro Barrera vs Lorenzo Bautista. A bit of a step-up fight for Herrera (22-0, 15 KO) as he faces Hernandez (22-4, 14 KO), who was knocked out in the second round by Eduardo Escobedo his last time out, but has previously been a tough opponent, and took the undefeated record of Miguel Beltran Jr back in 2010.

Showtime, 11:00 p.m. EST, Jessie Vargas vs Lanardo Tyner, Deandre Latimore vs Milton Nunez. A couple of "Mayweather Promotions" fighters get to run a ShoBox on Friday night. Works for me since I think Vargas (17-0, 9 KO) is actually pretty good, and Tyner (25-6-2, 15 KO) is, you know, pretty OK and a decent stay-busy fight for the prospect. Latimore vs Nunez is another story. It was originally supposed to be Latimore against Ryan Davis, which was lousy enough, but Davis failed his eye exam and we get Nunez, a Colombian "puncher" who punches the hell out of guys who aren't really fighters. Bad Left Hook will have live, round-by-round coverage. 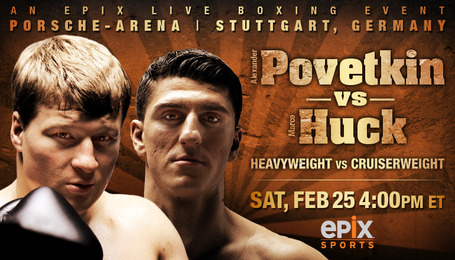 Epix (USA) / BoxNation (UK) / ARD (Germany), 2:30 p.m. EST (UK) / 4:00 p.m. EST (USA/Germany), Alexander Povetkin vs Marco Huck. Povetkin vs Huck will air after the Cleverly vs Karpency fight from Wales, I'm guessing, when it airs on BoxNation, and that's the feed we'll be watching. I'm actually quite excited for this fight -- I don't know if it will be much in the action department, but I'm very interested to see both how Huck does as a heavyweight, and how Povetkin does fighting someone who hasn't stunk in recent outings or isn't past 40, which I think is the first time we'll see that from Povetkin since he beat Eddie Chambers.

Epix and EpixHD.com are once again carrying the fight in the States, but last weekend the stream was so bad they actually had to admit they had technical problems instead of just pretending that they were figments of the users' imaginations or arguing with them about whether or not their computer was up to snuff (it was), so word of caution: Epix is well-known in boxing circles to have bad streaming for those who try to stream from their site. Everyone who has tried repeatedly has failed repeatedly to get a quality stream from them on those two-week trials they offer, which is a shame and I don't say any of this gleefully, because it's a great idea and if the stuff actually worked, I'd probably subscribe to their online service. But it does not, so I do not. Anyway, we'll have live coverage. Bad Left Hook will have live, round-by-round coverage. [ Event Page ]

BoxNation (UK), 2:30 p.m. EST, Nathan Cleverly vs Tommy Karpency, Frankie Gavin vs Kevin McIntyre. Normally I would not bother with something quite so dreadful (that's a total lie, I'd pretty much always bother), but this is being packaged on BoxNation with the Povetkin vs Huck fight, so what the hell? I'm far more interested in seeing how Frankie Gavin looks in his return to the ring. He's got an absolute load of talent, but his other issues are very real. If you have not yet done so, check out Dave Oakes' preview of the bouts. Bad Left Hook will have live, round-by-round coverage. [ Event Page ]

HBO (USA) / Sky Sports 1 (UK), 10:00 p.m. EST, Marcos Maidana vs Devon Alexander, Adrien Broner vs Eloy Perez. The HBO double-header from St. Louis already has people worried about hometown scoring for Alexander, but Maidana isn't exactly dying to take things to the scorecards anyway. It's a welterweight fight for the two 140-pounders, and scheduled for 10, which I never agree with for guys of this caliber, but seems a habit for Alexander, and some think it's because his team does not want to go 12 unless they absolutely have to. Maidana has arranged to keep his 140-pound belt (WBA) on ice in case he does not stay at 147, but this is a true move up for Alexander. The Broner-Perez co-feature is another chance to see Adrien Broner put on his fake persona with the hair-brushing and then pretend he's Floyd Mayweather in the ring. Perez is an OK fighter, better than the last guy Broner fought, but probably not a major test. Bad Left Hook will have live, round-by-round coverage. [ Event Page ] 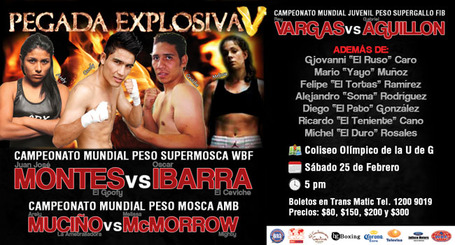 Televisa (Mexico), 10:00 p.m. EST, Juan Jose Montes vs Oscar Ibarra, Arely Mucino vs Melissa McMorrow. Pretty decent main event here, with Montes (21-2, 14 KO) and Ibarra (27-5, 18 KO) both looking to stay remotely in the hunt at super flyweight. Ibarra's coming off of a loss to Sylvester Lopez, while Montes has won a pair of get-well fights since losing to Tomas Rojas.