Tyson Fury vs Martin Rogan Official For April 14 in Belfast

Share All sharing options for: Tyson Fury vs Martin Rogan Official For April 14 in Belfast

The April 14 fight in Belfast between Tyson Fury and Martin Rogan has been made official, and will air on Channel 5 from Odyssey Arena.

Channel 5's Mark Pougatch spoke with both fighters during the Kid Galahad vs Jason Booth show this past weekend. This was the conversation:

Pougatch: "How much are you looking forward to this fight in Ireland on April 14th?"

Rogan: "Very much, very long anticipated fight, respectfully Tyson's world number 6 and I'm getting a great opportunity thanks to Mick Hennessy, Mickey Hughes and Tyson Fury, lot's have gone on with the politics in boxing obviously with the purse offers, but some of the phrases that were used against Tyson calling him a chicken and stuff like that I find very disrespectful because any man who steps in the ring is far from a chicken, and as I said, I respect the chance that I've been given to step in the ring.

"I'm a great heavyweight, I've proved that by beating Matt Skelton, the undefeated and un-knocked out guy, I beat Audley Harrison, so I got the pedigree to do the business on the 14 April and that's what I intend to do."

Fury: "Well we sat down and it's been a long decision, the fight has been off and on two or three times and it was suppose to happen last year when I fought at the Kings Hall and like you said before it's politics that got in the way of the boxing match and that's what it's not about. It's about going in there given the fans a great fight and I know Martin Rogan, I've grew up my full career watching him so I've nothing but respect for the man.

"I was watching the fights when he beat Matt Skelton and Audley Harrison and I know he is coming firing with both hands to take what I've got away but as he said I'm number 6 in the world and I'm working my way to a world title shot and I'm hoping I'm going to get there."

Pougatch: "So what is your prediction for the fight on the April 14 with Martin Rogan?"

Fury: "All I can say in prediction is this is going to be a great fight, there is going to be plenty of action and Martin Rogan always comes to fight as does Tyson Fury. And you are going to see two true warriors in the ring come April 14, in a fighting country as well."

Pougatch: "A prediction from your point of view?"

Rogan: "I don't make predictions, Tyson makes predictions. Tyson, what round am I going to knock you out in?"

While it will make for some good quotes between a couple of guys who know how to talk, and I don't think anyone dislikes Martin Rogan or his story, let's get down to what this fight really is. 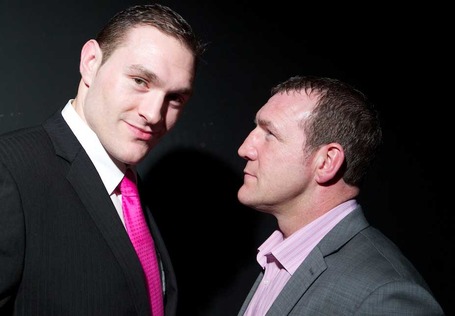 First off, I want to say I completely understand why Fury and Mick Hennessy chose not to fight David Price, and chose to vacate the British and Commonwealth belts. I don't like it, but TV contracts like Hennessy has with Channel 5 are precious commodities for any promoter, and they can't risk that on anything, really. Hennessy isn't exactly swimming in marketable fighters right now. Keeping Tyson Fury (17-0, 12 KO) from disaster is priority No. 1 in his spot.

But, let's be honest here: Hennessy is pushing Fury down the path of least resistance, whatever the reason. Since beating an out-of-shape Dereck Chisora last July, it almost seems like Hennessy understands how lucky they got, and has had him fighting the likes of Nicolai Firtha, which was non-title all the way since Firtha is American, and Neven Pajkic, which was only for the Commonwealth belt, as Pajkic is Canadian. Though both Firtha and Pajkic put a couple jolts into Fury, neither man was brought in for a competitive bout. And he never once defended the British title, which has been sitting dormant since July.

Now we have Rogan (14-2, 7 KO), a man who will turn 42 a couple of weeks after he fights Fury, and hasn't been in the ring since November 2010. He had a pair of fights in that month, against a couple guys with losing records, following a pair of losses to Sam Sexton. The first loss, in May 2009, was questionable. The second, in November 2009, was not, as Sexton overcame a fast start from Rogan to get him out after six rounds.

The best that can really come of this is a fun action fight, but who knows if Rogie has his old two-fist charges in him anymore? He's old, he's inactive, and he's always been extremely limited as a fighter. Chances are high this winds up not much of a challenge for Fury, and it's far from a fight that validates any of that world title talk he gave when vacating his belts.