Tonight's edition of ESPN Friday Night Fights is live at 9 p.m. EST on ESPN2 and ESPN3.com, and Bad Left Hook will be here for live, round-by-round coverage of the double-header.

In the 10-round main event, super featherweights Juan Carlos Burgos (28-1, 19 KO) and Cristobal Cruz (39-12-3, 23 KO) match up for a crossroads bout, with the WBC silver title on the line. Burgos, 24, is coming off of a win over Luis Cruz on the Pacquiao-Marquez undercard. His only loss came in Japan to Hozumi Hasegawa.

The 34-year-old Cristobal Cruz last fought on August 5. That night on Friday Night Fights, he and Art Hovhannisyan went to a technical draw in California, after a nasty gash was opened due to a headbutt in the fourth round. The judges were split, with one having it for Cruz, another two rounds apiece, and a third having a highly questionable 3-1 card for Hovhannisyan.

Cruz is a former featherweight titlist, but hasn't won a fight since 2009, when he topped Jorge Solis in one of the wildest fights in recent memory. Two of his last three have ended in technical draws due to headbutts cutting him, with a clear loss to Orlando Salido between them.

Here's a tip about listed heights for boxers: Cruz is listed at 5'7", Burgos at 5'8½". Now look at the picture of the two of them again. 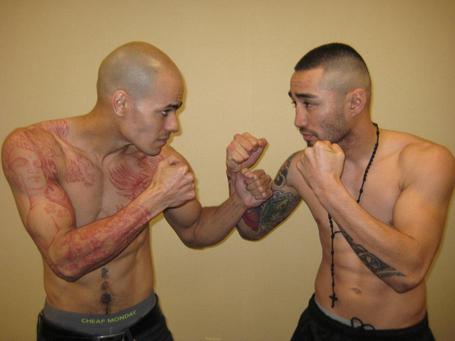 Also on tonight's show, 33-year-old junior welterweight Edgar Santana (26-3, 17 KO) faces Manuel Perez (16-7-1, 4 KO) in a fight that really doesn't belong on TV, and sort of gives the impression that Friday Night Fights has again been handed over to the indifferent or the careless when it comes to matchmaking. Perez, 27, lost his last fight, and is 2-3 in his last five, with neither win meaning anything, but his losses are to good fighters -- Mercito Gesta, Diego Magdaleno, Eduardo Escobedo, Matt Remillard w/o baseball bat, Brandon Rios, etc. He actually fought Rios twice, and is the man responsible for the draw on Rios' undefeated record, but that draw came in 2008 and I've no clue the circumstances around the fight.

Hopefully Santana vs Perez is a good action fight. That's all we can ask. It's not like we're looking at future contenders here.