Share All sharing options for: Povetkin vs Huck Fight Preview and Analysis: Does Marco Huck Pose a Major Threat?

On Saturday afternoon from Stuggart, Germany, Alexander Povetkin takes his toughest challenge in four years when he defends his WBA "regular" heavyweight title against top cruiserweight Marco Huck, in a fight that may have flown under the radar among three straight weekends of "heavyweight championship" fights, but could be the best of the lot.

Unlike last weekend's Klitschko vs Chisora madness, little out-of-ring drama has come from this fight, with the two including a big, friendly handshake at yesterday's weigh-in, a photo op moment perhaps meant to emphasize that this is not another "stain on boxing" or "black eye to the sport," but rather something about the other cliches of "noble warriors" and all that jive.

Nor is this something akin to next weekend's Wladimir Klitschko vs Jean Marc Mormeck joke -- unlike that obscene waste of time, Povetkin vs Huck is actually looking like a competitive, compelling fight on paper.

So who's going to win, and how does it break down?

Povetkin (23-0, 16 KO) is one of the sport's more curious "top fighters," in my opinion, as he's a mixture of legitimate talent and skill and massively questionable pro results. As an amateur, the Russian was a big-time standout, winning gold at the European Amateur Championships (2002/2004), the World Amateur Championships (2003), and the Olympic games (2004), all in the super heavyweight division.

But his pro career has been a very slow process, and despite the fact that he's 32 years old, it feels like he's still sort of a work in progress -- he isn't still a work in progress, of course, as this is the fighter he is and will be, but he often seems like some kind of "young gun." He's not a young gun. Povetkin is a finished, polished product.

Povetkin, nicknamed "Sasha," has had a strange pro career path. In his seventh pro fight back in April 2006, he fought the credible veteran Friday Ahunanya, and kept at that level of opposition until he entered a four-man box-off in October 2007, beating former titlist Chris Byrd. Three months later, he defeated Eddie Chambers, which is to date his best win.

Then something strange happened: After beating Chambers, which earned Povetkin a shot at the IBF belt held by Wladimir Klitschko, he didn't fight Klitschko. In fact, he didn't fight any contenders. He beat Taurus Sykes, hired Teddy Atlas, and then kept on that same path -- it was similar to the opposition he was defeating from his seventh fight until he fought Byrd. It was a bizarre strategy that probably did nothing to actually improve him as a fighter.

He twice ducked a fight with Wladimir Klitschko; he first claimed injury in December 2008, and then backed out of a fight in 2010. Both were signed deals, and Povetkin showed up to neither. 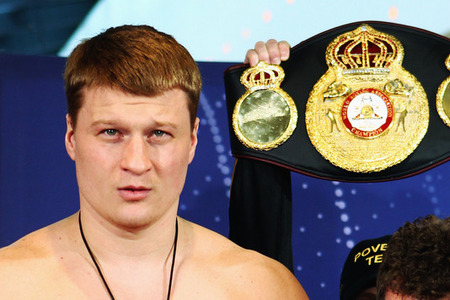 Atlas claimed that Povetkin was not ready, but by no measure did it seem that Atlas or anyone else were trying to get him ready to face Klitschko. When Tomasz Adamek was trying to bid for a fight against one of the brothers, and he eventually lost to Vitali last year, he took on a couple tall guys, Michael Grant and Kevin McBride. They weren't Klitschkos, but they were clearly designed to get him ready for the height disadvantage he'd be facing. Povetkin did nothing of the sort. The guys he was fighting weren't even guys he would have sparred to face Wladimir.

After Chambers, Povetkin beat Sykes, Jason Estrada, Leo Nolan, Javier Mora, Teke Oruh, Nicolai Firtha, Ruslan Chagaev and Cedric Boswell. The win over Chagaev put the "vacant" WBA "regular" title around Povetkin's waist, which he promptly defended against 42-year-old Boswell, winning by eighth round knockout on December 3. It was a win roughly as expected. Also mixed into that list was an unsanctioned fight in Pennsylvania against Bruce Seldon, who hadn't had a license in a while.

In other words, since beating Chambers, Povetkin has not beaten a top heavyweight in their prime. Chagaev is his best win in that time, and Ruslan hadn't looked very good in a couple of years, even in his wins.

But is Huck really a smaller man? Povetkin is notable for carrying what could be delicately described as baby fat. I'm not saying that it hampers him in any way, but it certainly isn't any help. He consistently stays in the same shape, weighing somewhere between 225 and 230, and never looks out of shape. He's just a little soft, a bit doughy.

Huck, at 209, looks a tad soft himself, but not like he doesn't belong at the weight. 20 pounds isn't something to ignore, but will Povetkin's 20 pounds actually be an advantage? Probably not, unless he uses that weight to lay on Huck and try to sap him of his strength that way.

Huck is not without some criticism, either. His lone loss, a 2007 stoppage at the hands of Steve Cunningham, is nothing to be ashamed of, and his other debatable bout, a split decision win over tough Denis Lebedev in December 2010, should have gone to Lebedev in my estimation, but also doesn't make me think less of his chances against Povetkin.

When Povetkin fought Chambers, I thought at the time that Eddie Chambers beat himself as much as Povetkin beat him, and every time I've watched the fight since then, I've felt the same. When Chambers had his head in the game during that fight, he handled Povetkin pretty well; he appeared, to me, to be the better fighter between the two of them, but I scored it for Povetkin, too, because Chambers basically handed the fight away with an inconsistent attack and strange lapses in focus. 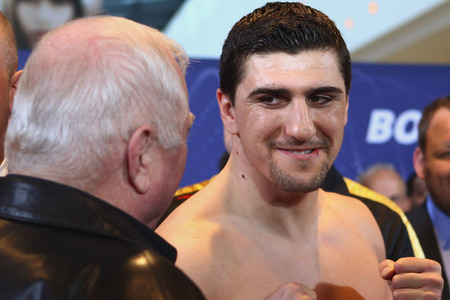 Huck, at his best, is an aggressive, charging fighter who isn't afraid to get rough. I've said before I think Huck would suffer in the heavyweight division against bigger guys he cannot bully. I wouldn't give him even a prayer against either Klitschko brother, and frankly I think someone like Dereck Chisora would eat him alive, too. Huck works at his optimum level when he's able to intimidate opponents, push them around and get in their head.

While Povetkin is big enough to keep Huck from effectively going into that mode, the question is does he have the mental game to deal with Huck's pressure, with his bully tactics, and with his willingness to be rough to the point of taking point deductions in an almost routine fashion?

Povetkin really hasn't had to deal with tough fights so far in his career, with guys who can go the extra mile to hang with him, to make him uncomfortable. I think there's valid concern here from the Povetkin side. Not only has he recently lost Teddy Atlas as trainer, but he's facing his first opponent in a while who is in good shape coming into the fight, and isn't a mediocre journeyman or simply past his sell-by date.

You might take all that to mean I'm going to pick Huck, but I'm not. I think Povetkin is going to surprise me -- though it's a fair question as to how he can surprise me if I think he's going to do it, but let's not get into all that -- and show some toughness that he's yet to exhibit in his pro career. I do think Huck will come out and try to rough up Povetkin. And then I think Povetkin is going to take exception and make him pay for it.

If Marco Huck were maybe 15% better a fighter, I'd pick him to win this one. I think it's going to be competitive and interesting, but I like Povetkin, and I like him by stoppage. Eventually, Huck will find out the real difference between a cruiserweight and a heavyweight. I don't think we're going to see a "new" Alexander Povetkin, just the revealing of some intangibles we weren't sure were there before now. Alexander Povetkin via TKO-10.