Share All sharing options for: Martinez vs Macklin: Fight Poster From HBO 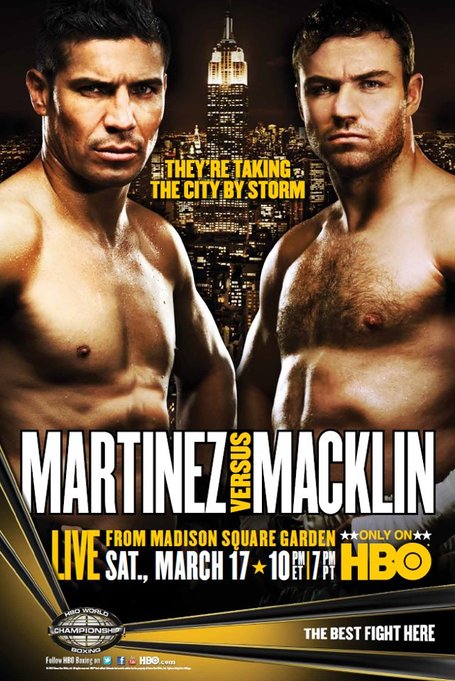 If you missed the DiBella Entertainment event poster, click here for that one.

Martinez (48-2-2, 27 KO) is looking to make it five wins in a row since his debatable and excellent late 2009 loss to Paul Williams. I don't know if it was someone here who mentioned it or I read it elsewhere, but someone made me think about how miraculous that fight was in the way that it broke Sergio Martinez out almost accidentally. That was supposed be Kelly Pavlik vs Paul Williams, but Pavlik kept pulling out of the fight (in my opinion, he straight up ducked his way out of fight Williams, but that's a long story), so Williams just fought Sergio instead, and they put on a Fight of the Year-caliber war, and then Martinez wound up getting the shot at Pavlik, won the middleweight championship, and here we are.

Is anyone giving Macklin (28-3, 19 KO) a fair shot here? I think he's better than Dzinziruk and Barker last year, and I think he's going to make it a better fight than they did, but I just don't like the style matchup for him. Macklin's a good, tough fighter, a real fighter's fighter, but still, this is a guy who went the distance with Ruben Varon two fights ago and didn't look all too hot. The challenge last year against Felix Sturm -- I said then that I got the feeling that was as good a fight as Macklin could have fought, and I don't think even a repeat of that is enough to beat Sergio. But I'm looking forward to the fight because Macklin isn't boring.