Overall a pretty quiet weekend, but two legit championships are on the line at heavyweight and flyweight, and there are a few more familiar names in action.

BoxNation (U.K.), 3:30 p.m. EST, Stephen Smith vs Ben Jones, Ashley Sexton vs Thomas Masson. If you're wondering, by chance, "Didn't Stephen Smith just fight?" the answer is yes, he did, on February 18 in Germany, on the Klitschko vs Chisora undercard. Now Smith (13-1, 7 KO) faces Ben Jones (12-2-1, 4 KO) for a regional WBO trinket at 130 pounds. Also in action is the always-entertaining Ashley Sexton (11-0-2, 5 KO), who has yet to meet a fight he couldn't make interesting even if it shouldn't be. Bad Left Hook will have live round-by-round coverage.

ESPN2 / ESPN3.com, 9:00 p.m. EST, Joan Guzman vs Jesus Pabon, Ed Paredes vs Manuel Leyva. Guzman (31-0-1, 18 KO) is trying to make some sort of comeback, but I can't take it seriously. For one thing he's fighting at junior welterweight, where he looks flat-out pudgy, because he's not a junior welterweight. For another thing, his hilarious "knockout" of Florencio Castellano put Juan Manuel Marquez's big knockout of Likar Ramos to shame in his last fight. For another thing, Pabon (17-2, 11 KO) lost his last fight via TKO-2 in June 2011. This is a crap Friday Night Fights main event. A washed-up fighter against an also-ran. What the hell happened to the ESPN matchmaking as compared to last year? Paredes (29-3-1, 19 KO) was originally supposed to face Cosme Rivera, but that's off, so Leyva (21-4, 12 KO) steps in. You may recall Leyva from a KO-1 loss to lightweight Dannie Williams last year. He's lost three of four and the win was over a guy with a 1-0 record coming into the fight. This is really a lousy FNF, the worst type of show they do. Bad Left Hook will have live round-by-round coverage.

SuperSport (South Africa), 1:30 p.m. EST, Thomas Oosthuizen vs Serge Yannick, Kaizer Mabuza vs Steven Wills, Sipho Taliwe vs Joey Stiglingh, Flo Simba vs Daniel Bruwer. Pretty good card overall here, with Oosthuizen (17-0-1, 12 KO) the main attraction against Yannick (14-1, 7 KO) of Australia in a decent matchup. Mabuza (23-8-3, 14 KO) is looking to end a two-fight skid against another Australian, Wills (16-0-2, 9 KO) at 140, and then you have heavyweight pretender Flo Simba (11-2, 10 KO) who was receiving all kinds of "ooh have you seen THIS guy?" hype from his promoters before old, fat Frans Botha knocked him out last year, which was followed by Danie Venter stopping Simba in just 1:53 two fights later.

Sky Sports 1 (U.K.), 3:00 p.m. EST, Jamie McDonnell vs Ivan Pozo, Tom Dallas vs Matt Skelton. European bantamweight champion McDonnell (18-2-1, 7 KO) was slated to face Malik Bouziane, but Bouziane doesn't really like fighting and hasn't done so in two years, so Pozo (32-6-1, 20 KO) is the new opponent. I like McDonnell, 25, but he seems like one of those guys whose bubble could be burst in any given fight. He's a good, scrappy fighter, but not dominant and this run he's on started a surprise and just keeps going. Bad Left Hook will have live round-by-round coverage. 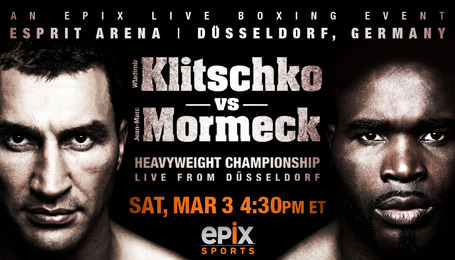 Epix / EpixHD.com (U.S.) / Sky Sports 1 (U.K.) / RTL (Germany), 4:30 p.m. EST, Wladimir Klitschko vs Jean Marc Mormeck. This is an absurd mismatch of the worst kind, and Klitschko trying to sell this pathetic crap just seems unusually dishonest even for boxing, especially since the Klitschko legend of gentlemanly conduct and dignity is so heavily forced down our throats too often. There's nothing sporting about this matchup. Mormeck is old, way too small, and and hasn't had a good win in five years, since he beat O'Neil Bell. But obviously we're going to cover it anyway. Epix and EpixHD.com will have the fight again in the U.S., and last week I had great luck with their free stream on the web site. I've been fair when their streams routinely did not work for too many people, but last week went better, and I think they learned some lessons from the Klitschko vs Chisora fight the week before, where it was so bad they had to admit having problems for the first time ever. So in the interest of fairness, this week I can truly recommend giving EpixHD.com a shot again. We all want it to work, because it's more boxing on U.S. TV (or at least internet). If this fight takes longer than a handful of rounds, Klitschko is carrying it. Bad Left Hook will have live round-by-round coverage. [ Event Page ]

TV Azteca (Mexico), 9:30 p.m. EST, Raul Garcia vs Michael Landero. This was supposed to be Landero (15-5-4, 5 KO) facing Moises Fuentes for Fuentes' WBO 105-pound belt, but Fuentes just got hurt over the weekend and pulled out, so now it's a flyweight fight between 25-year-old Filipino Landero and Garcia (31-2-1, 19 KO), which is pretty remarkable for about five days' notice. 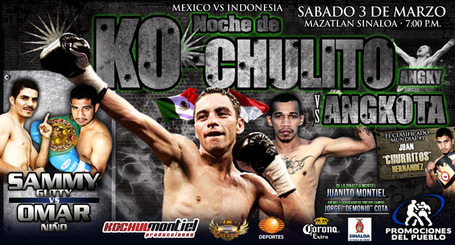 Televisa (Mexico), 10:00 p.m. EST, Fernando Montiel vs Angky Angkota, Omar Nino vs Sammy Gutierrez. It's the first fight of 2012 for Montiel (46-4-2, 36 KO), who just refuses to let things like losses get him down. After losing to Nonito Donaire last February, he got right back on the horse and fought and won in June and August, and now after losing to Victor Terrazas in November, he's back out there with Angkota (25-6, 14 KO), a two-time Jorge Arce opponent who didn't do very well either time. Like the Pongsaklek fight, we'll try to have RBR for this one, but no guarantees. The co-feature is a 108-pound bout between Nino (31-4-2, 13 KO) and Gutierrez (30-7-2, 21 KO), which is a decent fight but is a bit odd as Nino has a trilogy bout with Brian Viloria scheduled for April 1, and BoxRec is listing a different fight for Gutierrez, but the last I heard this thing was still on. Bad Left Hook will attempt to have live round-by-round coverage.

Telefutura, 11:00 p.m. EST, Vicente Escobedo vs Lonnie Smith. Escobedo (24-3, 14 KO) is still floating around the fringes of contention at 130, and could make some noise, I guess, if he starts fighting consistently. He's a totally competent competitor. Smith (14-2-2, 10 KO) is a pretty fun dude who had a good fight with David Rodela last year, winning a UD-6 in April. Escobedo last fought in September, beating Rocky Juarez according to script. This fight, by the way, is being held at the Woodland Community Senior Center.