Donaire vs Vazquez Fight Preview: Does WV2 Pose a Danger to the Filipino Flash?

Share All sharing options for: Donaire vs Vazquez Fight Preview: Does WV2 Pose a Danger to the Filipino Flash?

Nonito Donaire is a celebrated fighter, at least among diehard boxing fans who follow the sport closely. A phenomenal talent, the 29-year-old Donaire has won titles at flyweight and bantamweight, along with an interim belt at super flyweight. In every weight class, he has been considered the man to beat.

Now he moves up to super bantamweight for the first time, where his connections and fame bring him a vacant title fight in his first bout at 122 pounds. He'll face Puerto Rico's Wilfredo Vazquez Jr, a second-generation fighter who has never been considered a blue-chip prospect, and when last seen by most, was outfought by a faded Mexican star, Jorge Arce.

So much of the talk about Donaire in the last couple of weeks has been about what's next or what's in the future. Arce is being lined up as his next fight already, and there's been mention of Japan's Toshiaki Nishioka and Cuba's Guillermo Rigondeaux, too. (Promoter Bob Arum is interested in Rigondeaux vs Donaire, he says, but Donaire is not interested at all.)

There's even been chatter about Donaire facing Yuriorkis Gamboa, the world's best featherweight who appears headed to lightweight for an April bout with Brandon Rios.

But what about Vazquez? You'd almost think Donaire was fighting unopposed on Saturday.

Vazquez (21-1-1, 18 KO) is the son of three-division titlist Wilfredo Vazquez, who won belts at bantamweight, super bantamweight, and featherweight over a celebrated 21-year career in the sport. The younger Vazquez came to the game late. He didn't start training until he was 21 years of age, with no amateur experience, a big reason he was never considered a top prospect despite his bloodline. It's tough to have pro success when you don't even start boxing until you're 21, and it's very unusual.

But thus far, the 27-year-old Vazquez has done pretty damn well for himself. He turned pro at age 22 in December 2006, and boxed mostly in Florida for two years against very light competition before starting to slowly work his way up the ladder. In 2009, he started showing a little more life, beating veterans Genaro Garcia, Jose Angel Beranza and Cecilio Santos.

Vazquez got his first real shot in February 2010, against a fellow unbeaten prospect. With home field in Bayamon, Vazquez obliterated the much more heavily-hyped Marvin Sonsona of the Philippines, a 19-year-old fighter who was supposed to be the next big boxing export from his country.

It looked very much that night like a man fighting a boy -- and a boy who wasn't in the least bit prepared for real pressure or real expectations either. Part of what led Vazquez to that decisive win was Sonsona having his own problems outside of the ring (he didn't fight again until October of last year), but it proved that Vazquez was in the game to fight and to win. 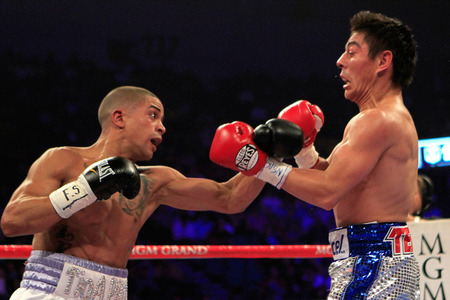 Following successful defenses over Zsolt Bedak and Ivan Hernandez, the Puerto Rican was matched against Jorge Arce on the Pacquiao vs Mosley undercard. With Arce having long since started a pretty big decline, the younger, fresher Vazquez was installed as a massive betting favorite.

Arce had other plans. The gritty warrior turned in a great performance, outslugging and outfighting his younger opponent and coming away with a stoppage in the 12th round, when Vazquez's father could stand to see his son pummeled no longer.

It was, perhaps, a wake-up call for Vazquez, who may have taken the old Arce lightly and been too willing to trade punches. Five months later, Vazquez returned to the ring with a get-well fight against Roberto Carlos Leyva, winning by third round knockout.

Nonito Donaire has really never had bumps in the road as a pro fighter, save for his lone loss in 2001, which came in his second pro fight. Donaire (27-1, 18 KO) was also never handed much in his career. He worked his way up, beating easy opponents until 2007, when he was thrown into the fire on Showtime against Vic Darchinyan.

At the time, Darchinyan was undefeated and considered one of the sport's most brutal punchers. Armenia's "Raging Bull" had a storyline for his fight with unknown Nonito Donaire, too, having dominated Nonito's older brother Glenn in 2006.

But instead of seeing Vic do his usual thing where he stalked and blasted out a sacrificial lamb, it became clear very quickly that there was something to this Nonito Donaire kid, and he wasn't going to roll over. In the fifth round, having frustrated Darchinyan horribly, Donaire absolutely flattened Darchinyan with a bomb of a counter left hook, knocking Darchinyan out and so loopy that to this day Darchinyan seems to have trouble remembering how badly Donaire kicked his ass.

Since then, Donaire has been one of the best fighters in the sport. He's gone 9-0 (7 KO) since thwarting Darchinyan, with wins over top-notch fighters like Fernando Montiel, Moruti Mthalane, and Omar Narvaez.

Unfortunately, a lot of his time has been spent on the sidelines arguing with promoters. He left Gary Shaw for Top Rank, and last year tried to leave Top Rank for Golden Boy, which wound up with an arbitrator ruling Donaire's Top Rank deal still valid, and eventually, Donaire just re-signed with Bob Arum's company anyway.

When he's in the ring, he can be sensational. But recently, some have started to wonder if Donaire hasn't been carefully matched.

That comes from the fact that Donaire, who is listed at 5'5" but is closer to 5'7" and has been huge for his weights, has largely fought very short fighters. Darchinyan, Fernando Montiel, Narvaez, Wladimir Sidorenko, Hernan Marquez, Rafael Concepcion, and Raul Martinez are all very short guys, no taller than 5'4", some as short as 5'2".

Vazquez is listed at 5'5" and appears to really be about 5'5". Standing next to Donaire, he's a couple of inches shorter.

Donaire has also made so clear that he's trying to "make good fights for the fans" that in a business where lying is as commonplace as it is in boxing, you have to wonder if that's not code for, "Keep me away from guys who box or are defensive-minded." Despite winning every round against Narvaez, Donaire had issues, and his flaws were pointed out by many. Narvaez, a little guy who's really a flyweight and can't punch, simply didn't allow Donaire to look great -- and Donaire couldn't force his hand, either.

Vazquez isn't that type of fighter. He's easy to draw into a slugfest, and thinks offense-first. Stylistically, he's likely made for Donaire, and should provide an exciting fight, although likely in a losing effort.

It would be unwise for Donaire to simply look past Vazquez. For one thing, we can't be 100% sure how his power and speed are going to translate up to 122 pounds. He looks like he has the body to eventually go up even further, but you never know until you know. Tomorrow night, we find out how he fares over bantamweight.

Is Vazquez dangerous tomorrow? Somewhat. He has power and he can fight. Donaire, on paper, figures to have more of everything, and is simply the more talented man. Here's hoping for fireworks, even if we get nothing surprising.