Chavez vs Rubio Fight Preview: Alleged Tough Test For Chavez Should Be More of the Same

Share All sharing options for: Chavez vs Rubio Fight Preview: Alleged Tough Test For Chavez Should Be More of the Same

Marco Antonio Rubio is being sold as a major test for Julio Cesar Chavez Jr tomorrow night in San Antonio, live on HBO. But a deeper look reveals the veteran Mexican to be only a marginal step up from Chavez's recent opponents, if he's even a true step up at all.

There are a few reasons that Rubio is being sold this way:

These are decent enough reasons -- understandable, valid in some ways, but not exactly convincing if you go past the press releases and the HBO commercials for the fight.

Rubio (53-5-1, 46 KO) is a credible fighter. If you consider the likes of Sebastian Zbik and Peter Manfredo Jr to not be credible, then this is a clear step up for Chavez. But how much better is Rubio than those guys?

It's a small difference at best, in my estimation. Rubio did knock off David Lemieux last April in what was at the time a big upset. But since then, Lemieux's stock has dropped like a rock. The loss to Rubio was a bad sign, and the young Canadian followed that with an eight-month layoff that included firing trainer Russ Anber, leading ultimately to a return to the ring and a decision loss to Joachim Alcine, a former titlist who has definitely seen better days.

Lemieux is clearly a limited fighter, and Rubio and his team obviously understood that going into their fight. The game plan was to wait out Lemieux and let him expend his energy looking for his usual knockout. They did that, came back, and Rubio stopped a fighter who still has a lot to learn, if he can learn it.

Since beating Lemieux, Rubio has stayed busy and tried to get himself in for a WBC title shot. He's got that now, but he took "staying busy" to an extreme, fighting a series of lame mismatches against Ricardo Ramallo (TKO-3), Mohammed Akrong (TKO-5), and a shot Matt Vanda (TKO-5).

What is Rubio's best win? His most notable wins, the names that jump out on his sheet, all have something in common: The win isn't as good as it appears to be just by looking at the result. Lemieux is simply not the fighter he was believed to be, and I don't think there's much arguing with that. Frankie Randall was in the middle of his exit from the sport when Rubio knocked him out in 2005.

Grady Brewer is a capable fighter, but far from first-tier. Jose Luis Zertuche was coming off of a brutal knockout against Kelly Pavlik when Rubio fought him in 2008, and their 2010 rematch was pathetic and unnecessary by any measure. 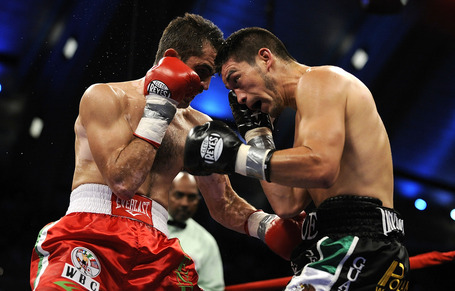 His best win was probably against Enrique Ornelas in October 2008, on the Hopkins vs Pavlik card. It was a good fight, a gritty affair that saw the two toe-to-toe and neck-and-neck throughout, with Rubio nipping a split decision win. Ornelas is no top fighter either; like Rubio he's a solid, honest, tough guy who can fight a little bit, but has never seemed in any danger of becoming a serious contender.

That win netted Rubio a shot at Pavlik, who of course badly lost that night in a catchweight bout to Hopkins. Pavlik took out his frustrations by demolishing Rubio for nine rounds before Rubio's team finally pulled the plug in the corner between rounds, which came a few rounds too late for Rubio's liking, it appeared. Watching the fight live, and I don't mean this to be an insult to Rubio, I honestly thought he might break down and cry at various points. He was totally overwhelmed mentally.

Physically, it was even worse. Pavlik made Rubio, a natural junior middleweight in reality, look absolutely tiny. Chavez (44-0-1, 31 KO) is a big middleweight -- he has come in at 185 and 179 pounds on the HBO unofficial scales for his last two fights and there are a lot of questions about how long he can stay at 160.

Of course, as our own Lee Payton said when I first presented the argument for Rubio not really being much of a challenge, Chavez is not Kelly Pavlik, either.

What Chavez is is a big, sturdy middleweight who can take a punch, has legitimately improved, and works with one of the best trainers in the world in Freddie Roach.

Chavez is never going to be an elite fighter. I just don't think he's naturally good enough for that sort of thing, nor is he a Bernard Hopkins who comes in late and eats, sleeps, and breathes boxing every moment of his life, constantly staying in impeccable condition.

But I just don't see how Rubio can deal with him. If Rubio is going to win this fight, he's right when he says he needs a knockout, but it's not because the judging or officiating will be biased. It's because I don't think he's a good enough boxer to win a decision over someone who throws punches as much as Chavez does. He can't wait on Chavez the way he did Lemieux, because Chavez is better than Lemieux and won't beat himself so easily.

Rubio has to knock Chavez out, and he probably has to do it early. But I'm expecting this to wind up looking a lot like the Manfredo fight, where a smaller man just can't deal with Chavez's punch volume. Chavez may not be Pavlik, but he's better than a lot of people think, too, and he's better than Rubio.