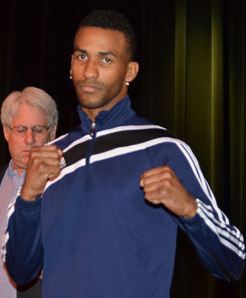 Cuban lightweight Rances Barthelemy was too big and too strong for a game Hylon Williams Jr in a meeting of undefeated prospects tonight on Friday Night Fights, winning a strong and clear unanimous decision in the night's first of three televised bouts.

Barthelemy (15-0, 11 KO) dictated most of the fight with his height and ability to effectively crowd Williams (15-1, 3 KO), who simply didn't have enough power to back the Cuban down or keep him at bay.

Uppercuts were the key punch for the Cuban during the fight, and we're proud to report that Barthelemy isn't your typical "dull Cuban" fighter who gets these undercard spots but isn't a genuine prospect. Barthelemy is one worth keeping a close eye on, and should be back on Friday cards again in the future.

Barthelemy, 25, did show a bit of a troublesome arrogance too often, constantly switching to southpaw (which did him no favors whatsoever), and clowning repeatedly. His performance was impressive, but not so impressive that his antics were really warranted.

Williams, 21, showed a lot of pure talent, but his lack of power is always going to be a issue. He really has no notable punching power whatsoever, and even when he solidly landed shots in counter, he just couldn't budge Barthelemy. His ceiling is going to have to be considered low because of that flaw -- there's not much he can do to punch harder.