For those who may have missed a few dates that are set or tentative or even just talked about, let's catch it all up outside of the "big shows" and talk about some other fights coming up that we haven't yet discussed at Bad Left Hook.

Yesterday we discussed the changes for the February 10 (Demetrius Andrade vs Terrance Cauthen) and February 17 (Mike Dallas Jr vs Miguel Gonzalez) cards, but some other fights have been set up for the ESPN series.

February 24: The night's main event from Dover Downs in Delaware will pit a pair of Mexican fighters in the 130-pound weight class, as Juan Carlos Burgos (28-1, 19 KO) takes on Cristobal Cruz (39-12-3, 23 KO) in a solid FNF matchup between emerging contender and rugged veteran.

Burgos, 24, surprised some with his win over Luis Cruz on the Pacquiao vs Marquez card in November, but the surprise was also surprising to some of us, who felt Burgos was the better fighter going in, having seen the Puerto Rican Cruz struggle in previous TV bouts. Cristobal Cruz, 34, is 0-1-2 in his last three, but those two draws for the former featherweight titlist were technical decisions after three and four rounds against Ricardo Castillo and Art Hovhannisyan, both the result of cuts on Cruz following accidental headbutts.

The Mexican veteran is a sort of free-for-all fighter, and his recklessness can be a blessing and a curse. He's one of those guys who gets the most out of marginal talent, and he does it by being one of the wildest brawlers in the sport when he's on his game. Still, the last time he won a fight was in July 2009.

March 2: Joan Guzman will be back in the ring. Why Friday Night Fights is paying for a Joan Guzman fight is a mystery to me, considering Guzman, 35, has made himself an irrelevant non-factor and something of a punchline. It's nice that he's 31-0-1 and all, but he deserved to have a loss to Ali Funeka the first time around, and the second time against Funeka when he blew off making weight by nine pounds was enough to finally break the camel's back on my tolerance of Joan Guzman.

Anyway, this will be Guzman's first fight since his phantom knockout of Florencio Castellano in November. My favorite part was when Castellano took his time sitting down after the "monster uppercut." Guzman will be facing Puerto Rican southpaw Jesus Pabon (17-2, 11 KO). Pabon is coming off of a TKO-2 loss to Javier Castro last June. This is really not my kind of FNF main event. At all.

Also set for the card as of now is a welterweight fight between Ed Paredes (29-3-1, 19 KO) and Cosme Rivera (34-14-3, 24 KO). Paredes, 26, just keeps hanging around the fringe of possible contention at 147 with fights like this. Rivera, 35, beat Antonio Pitalua in November, pretty easily outboxing his rival in their third bout. 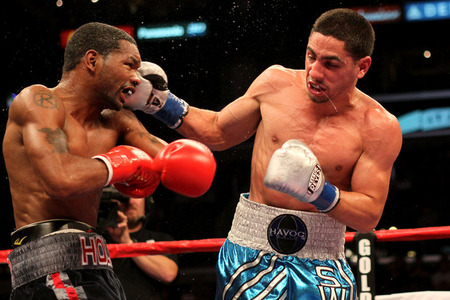 March 16: Back to an interesting main event, as junior welterweights Kendall Holt (27-5, 15 KO) and Tim Coleman (19-2-1, 5 KO) will hook up in California in a 10-rounder. Holt and Coleman both had FNF highlights in 2011, as Holt flat demolished Julio Diaz with a left hook in May, and then Coleman lost one of the better fights of the season to Vernon Paris in August. If this isn't do or die for Holt and Coleman, it's damn close to it. Holt lost to Danny Garcia in October on the Hopkins vs Dawson card in his last fight.

March 30: Now here's one worth making sure you're home for. Two exciting fighters, both hungry to get to the next level. Hank Lundy (21-1-1, 11 KO) will face Dannie Williams (21-1, 17 KO) in a 10-round lightweight main event from Foxwoods in Connecticut. Lundy was last seen bombing away against David Diaz in last year's season finale of FNF, scoring a sixth round knockout.

Diego Magdaleno (21-0, 7 KO) will look to continue his climb up the 130-pound rankings on March 23 on ShoBox, when he faces Miguel Beltran Jr (26-1, 17 KO) in a really nice matchup in Tucson. Also on that card will be hyped Cuban welterweight Yordenis Ugas (11-0, 5 KO), who failed to impress or live up to his billing as more than a typical Cuban Friday Night Fights guy when he won an eight-round decision against a very overmatched opponent on the January 13 edition of FNF. Ugas will face Michigan club fighter Juan Garcia (11-0, 8 KO).

Hernan "Tyson" Marquez will be back on March 24 in Mexico, facing Filipino brawler Rodel Mayol for Marquez's WBA flyweight belt. Marquez (32-2, 25 KO) had an outstanding 2011, while Mayol (30-5-2, 22 KO) went 3-0 for the year but didn't have the big, talked-about wins that Marquez had. Mayol is always dangerous simply because he can punch and he's not afraid to get dirty. It could be an interesting scrap.

Victor Cayo was hoping to make an all-Dominican clash with Joan Guzman, but with Guzman unfortunately invading the ESPN airwaves, Cayo has instead set up a fight with Nate Campbell in Santo Domingo, also on March 24 (which is going to be a really busy boxing day and night). Cayo (27-2, 19 KO) can fight a little bit, but I honestly don't know if he's beaten anyone as good as even today's faded version of Campbell (34-9-1, 25 KO).

After losing to Danny Garcia last April, Campbell (who turns 40 on March 9) took a pair of trips to Russia and went 1-1. He's 1-4 in his last five and a pure shadow of the fighter he worked hard to become, then never got to capitalize on thanks in large part to -- ding! ding! -- Joan Guzman not making weight for a fight that wound up canceled and led to Campbell, who at the time held three sanctioning body world titles, declaring bankruptcy.

Russian cruiserweight Denis Lebedev is tentatively set to return on April 8 in Moscow. Hopefully he'll fight someone in his peer group this time instead of wasting more of everyone's time, but if he follows pattern he should be facing Montell Griffin. Glen Johnson probably still has too much life left in him.

WBO junior middleweight titlist Zaurbek Baysangurov could face Lukas Konecny on March 10 in Kiev, Ukraine. Baysangurov (26-1, 20 KO) was promoted from interim to full titlist when Sergiy Dzizniruk was stripped last year, after Dzinziruk did not make a fight with Konecny (47-3, 22 KO), which was a shame because Dzinziruk vs Konecny in 2008 was one of the best European fights of the last decade.

Chris John and Daud Yordan are both likely to fight in Singapore on March 31. Neither has an opponent yet.

Also in Japan, the Yamanaka vs Darchinyan card for April 6 has filled out with a pair of notable fights. Takahiro Ao (22-2-1, 10 KO) will defend the WBC super featherweight belt against veteran Terdsak Kokietgym (formerly Jandaeng) (46-3-1, 31 KO). Also, Hozumi Hasegawa (29-4, 12 KO) will return against Felipe Carlos Felix (18-0, 10 KO). Felix, 30, has an undefeated record, but the Mexican hasn't fought since January 2011 and hasn't beaten anyone to get that record, either.