Tomorrow's Friday Night Fights on ESPN2 will be live at 9 p.m. EST from the Mohegan Sun in Connecticut, and Bad Left Hook will have live round-by-round coverage, but let's bring up something important before we get to the weights.

There has been a story going around from the Boxing 360 promotional outfit -- they say they're the promoter of record for 36-year-old Angel Hernandez, and that he is unfit to fight, saying he now slurs his speech. Hernandez is a late sub to face Demetrius Andrade tomorrow night in the FNF main event.

Boxing 360 does not have the best reputation in the world, and I'm not going to pretend that they do. But any mention of something like this is cause for concern.

"We are the promoter of record for Angel Hernandez and we want to protect him from himself. Angel is not able to compete physically. Angel has a warrior heart but he is done. We will do everything to protect him for getting hurt against a great fighter like Andrade."

Eight hours ago, all they could add was this:

"We have done and will continue to do everything we can for the right cause. Angel Hernandez shouldn't fight. He is severely damaged."

Last night, Gabriel Montoya of MaxBoxing had this:

"Spoke with Boxing 360 owner Dr. Mario Yagobi who is not at all happy his fighter Hernandez is being put on a show without his permission. That is not say he wants a piece of the action. Dr. Yagobi fears for Hernandez' life and feels as well Hernandez should not fight."

The fight is going ahead. Andrade weighed in at 153½, with late replacement opponent Hernandez at 152¾ 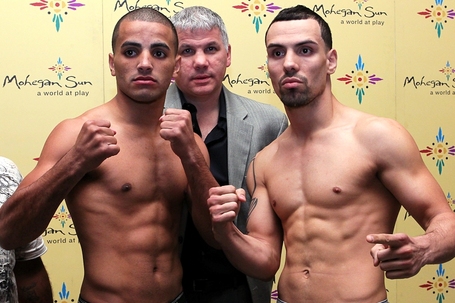