When Kell Brook signed with Matchroom Boxing last year, he was a piece of the puzzle that promoter Eddie Hearn was putting together in hopes of becoming a major player in the British fight game. Darren Barker had already come on board, and Carl Froch would later join the ranks, officially sealing Hearn and Matchroom as a force to be reckoned with, and a player for already-established fighters and rising stars alike.

The line then was that Brook (26-0, 18 KO) didn't feel Frank Warren was guiding his career properly, and that Matchroom would fast-track him to a world title shot sooner than later.

Nine months later and going into his fourth fight with his promoters, it would be easy to argue for the case that Hearn has done the expected job, but also easy to argue that Warren could have done the exact same things with Brook that have been done. Wins over Lovemore N'dou, Rafal Jackiewicz, and Luis Galarza were functional and kept the Sheffield "Special One" active, but none truly put him on any higher a level than he was already thought to be when he left Warren.

At 25, Brook is probably as ready as he's going to get for that major fight, but there's a problem: Pretty much all the major welterweight action takes place in the United States, where Brook has no name and has never been featured on TV. Though dedicated American boxing fans know him, the more general fanbase (which probably accounts for upwards of 90% of the people who "watch boxing" in the States) really doesn't know anything about Kell Brook, and if they know his name, they've probably not really seen much of him in action.

In other words, he may have to get a sanctioning body ruling in his favor, even if he does beat Matthew Hatton on Saturday in front of a reported 10,000 fans at Motorpoint Arena, to get the title shot he covets. Here are Brook's current sanctioning body rankings:

Obviously, Brook is not in line to face either Pacquiao or Mayweather, one of whom is likely to fight twice this year (Manny) and the other probably just once (Floyd) unless he surprises some people. Senchenko is busy with Malignaggi, and if he does win, will be in no rush to fight someone like Kell Brook. The IBF still has to get the Jones vs Bailey fight sorted, with it seeming likely that the fight will land on the Pacquaio vs Bradley undercard.

So how close is Kell Brook to a title shot? Probably not as close as he deserves, at least in comparison to many of the guys who will soon be getting title shots, or have recently. It may still be a handful of fights away, and unless Hearn and Brook want to move their operation to the States, it might be hard for him to even land fights with credible foes who can truly increase his value. One name that has come up repeatedly is Amir Khan, should Khan move to welterweight after his rematch with Lamont Peterson, and while that's probably a lot more likely than something like a Pacquiao fight, 10% is "a lot more" than 0.5%, but neither is a good bet.

Brook, like American Mike Jones, is sort of stuck an unfortunate state of limbo: He's good, and as deserving as just about anyone else, but doesn't have a fanbase (or in Brook's case, the "correct" fanbase), and hasn't done anything so truly special yet to make anyone really demand a big fight, either.

All of this probably leads you to figure that Matthew Hatton is not my pick for the fight today, and you would be right. Hatton (42-5-2, 16 KO) has made the most of his career that anyone could have expected. In fact, I dare say that he's exceeded pretty much all expectations, if you were to go back five years and get a read on the thoughts of him at the time. 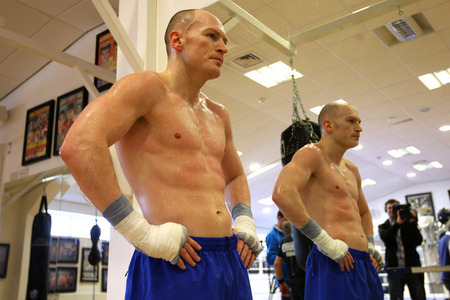 For years, Matthew was dismissed as a less talented, less colorful, less capable younger brother of a star fighter, and frankly, that was and still is all true. But little brother has done himself proud, making legitimate improvements over the years and working hard to get to where he did get. Sure, big brother got him a semi-giftwrapped European title, but there was a time when it would have been hard to imagine even a handout being a sure bet at that level for "Magic" Matthew.

He's fought hard and even in his losses, he's made superior opponents, such as Canelo Alvarez last year, earn the wins. He doesn't see himself as a stepping stone, and has either deflected criticisms of his ability, or used those criticisms to fuel his hunger.

At 30, a win over Brook would be pretty much career-defining for the Manchester battler. Right now, his best victories have come over the likes of Yuriy Nuzhnenko and a faded Ben Tackie. Brook is simply another level (at least) from the guys Hatton has been successful against in the past, and really the only fighter who can compare to Brook in terms of talent on Hatton's sheet is Canelo, who all but shut him out a year ago.

I respect what Matthew Hatton has made of himself, but he's a very limited fighter in reality, even having made strides over the years. I just can't figure a way that Hatton is truly competitive with Brook, let alone having a chance to beat him. He's not a big puncher, and probably can't knock Brook out. And Brook has him beat in basically every area that matters in the ring, except for pro experience, which becomes nearly negligible when you have a talent difference as stark as this one.

The real feather in Brook's cap for this fight would be stopping Hatton, which has only been done once, back when Hatton was nothing more than a sibling project in 2003. Alvarez couldn't do it last year, so if Brook could manage it, there would be some statement made. I think he's going to try, but Hatton will stand up through the fight, and make it until the final bell. He won't come close to winning, but he'll hang in there and do his best. Prediction: Kell Brook via unanimous decision.

Bad Left Hook will have live round-by-round coverage of the full Sky Sports broadcast this afternoon, starting at 5:00 p.m. EDT.