Share All sharing options for: Martinez vs Macklin Preview: Rocky Road to Greatness For Macklin on St. Patrick's Day

Five and a half years ago, Matthew Macklin became, in some sense, a star. It was September 29, 2006, when Macklin, then a 24-year-old domestic contender at junior middleweight in the United Kingdom, faced Jamie Moore in Manchester with the British title on the line.

Going in, the fight was just a good-looking British scrap, one that figured to have some action and had no real impact on American fans, really. At least not as a live airing, since it wasn't televised here and most people just plain don't care if it's not pushed on them by HBO or, to a lesser extent, Showtime.

Moore vs Macklin was not a "mega-fight," an "event," or a "fight to save boxing," at least not in the pre-fight hype. But it became a fight that deserved to be called an event, even a mega-fight (if we're talking quality), and it was so damn good that had it been in the position where it was being shoved down your throat, it very well might have created a lot of new boxing fans who would have stuck around, at least until they figured out why the sport can be so damn hard to care about at all.

Matthew Macklin didn't win that night. In fact, he was brutally knocked out by Jamie Moore in the tenth round, totally exhausted physically and mentally, having already given more than in one night than many do over a career. In fact, last weekend's epic brawl between Orlando Salido and Juan Manuel Lopez reminded me very much of Moore vs Macklin, but it wasn't quite as great a fight, great as it was. After a heart-pounding ninth round, there was little left in the tanks for the 10th, and both Macklin and Lopez were stopped in short order.

Macklin was taken out on a stretcher. It would have surprised few in the boxing world if that had essentially ended the career of the Birmingham brawler. Sure, he might have come back, but he never would have been himself again, you could have assumed. That's what happened later on to the fight's winner, when Jamie Moore lost a war in 2009 to Ryan Rhodes and returned to the ring six months later to get beaten down by a journeyman. Moore retired from the sport not long after, and hasn't looked back.

But instead of having that gutting, heartbreaking, and downright frightening knockout loss to Moore finish off his career, Macklin returned to the ring after a 10-month break. He took it slow, but he won his fights, gradually knocking off some names. Yori Boy Campas, old and worn-out as he was by then, fell in 2008. A year later, Wayne Elcock went down in three, followed by Amin Asikainen in one round.

It took a little longer than he expected, it's not Kelly Pavlik, and it's not quite Madison Square Garden, but I doubt Macklin minds what ultimately came of that idea.

Since the win over Pintos, Macklin has kept his name out there. He won the European middleweight title for a second time by beating overmatched Shalva Jormadashvili in September 2010, which was originally the first of what seems like 100 dates that never materialized with would-be rival Darren Barker. Three months later, he got past a surprisingly tough challenge from Ruben Varon, who was expected by most to be chum for Macklin on another of Frank Warren's half-baked, five-hour pay-per-view events. 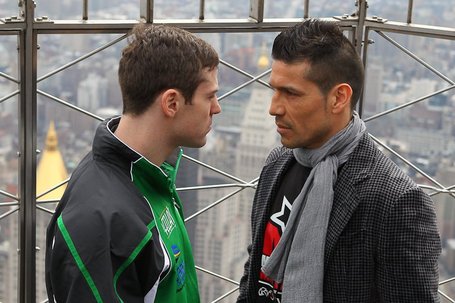 Last year, his loss to Felix Sturm in Germany was roundly criticized as a pure robbery by many (perhaps by most). It is mostly because of that fight that Macklin is where he is on Saturday night, facing middleweight world champion Sergio Martinez in New York at The Theater at Madison Square Garden, live on HBO and Sky Sports.

As much as any non-Manny, non-Floyd fight can be, this is a big fight on both sides of the pond.

On Thursday, we discussed the rather meteoric rise of Sergio Martinez, starting in late 2008 when he got a shot on HBO as the TV curtain jerker on a triple-header meant to advertise "the future" of boxing. At 33, the Argentine with the gaudy record but little by way of eye-catching wins, who had been passed over by Top Rank at one point after an evaluation, was billed, basically, as a prospect, facing Alex Bunema.

While Alfredo Angulo and Yuriorkis Gamboa pounded out their fairly mismatched foes that evening, it was Martinez who stole the show. His recent win streak -- four in a row over Kelly Pavlik, Paul Williams, Serhiy Dzinziruk, and Darren Barker -- has seen him become a name, if not an attraction. You can call Martinez a lot of things, but "star" really isn't one of them, unfair as that is given that Martinez is likeable, legitimately good, and generally an entertaining fighter. He's had the HBO push behind him, but it hasn't turned him into a draw. It's the reason he constantly chases and calls out a vastly inferior fighter, Julio Cesar Chavez Jr, who is a star, unfair as that is.

Macklin and the selling line -- the Irishman fighting for the title on St. Patrick's Day -- may well be responsible for not just some but the majority of whatever crowd is brought into the 5,000-or-so capacity venue. But this is a fight that deserves a real audience, too.

Not only do you have the gimmick, which is at least something that real people might actually care about, instead of space wars with Victor Ortiz, but you have the world's best middleweight against a man with a valid claim for being his most legitimate challenger at the moment.

And though the deck is stacked against Macklin for reasons simply to do with talent and styles of fighting, he can and should be expected to leave what he has in the ring, even if it likely results in a fiery crash of a finish. He's done it before, and this may be the only shot he ever gets at this level.

Martinez is 37 years old, and there is a question if he's really 100% healthy anymore, or if he ever will be again. He told Yahoo! Sports' Kevin Iole that his somewhat lackluster performance against Barker in October was due to an elbow injury, suffered first in training and then again in the second round of the fight, leaving his left hand weaker than it should have been. That Martinez was winning the fight clearly when he broke Barker's eardrum on the 11th round knockout shot says a lot about how good he's become.

Macklin needs, quite frankly, three things if he is to win this fight. All of them. Not just one of the three.

If all of that comes together, we could be in for a stirring, emotionally-charged night. If none of it does, we're still in for what should be no worse than an entertaining bout. I'm going for the latter, with Macklin having some success in the first four rounds or so, before getting outclassed by Martinez, who finds his rhythm and starts tearing up the brave challenger en route to a knockout victory. By the time it's over, there will be no question: Sergio Martinez remains the class of the 160-pound division. Sergio Martinez via TKO-9.